The Vox party has agreed to support a center-right coalition in Spain's most populous region, ousting the Socialist incumbents. It's the first time a far-right party has played such a role since the Franco dictatorship. 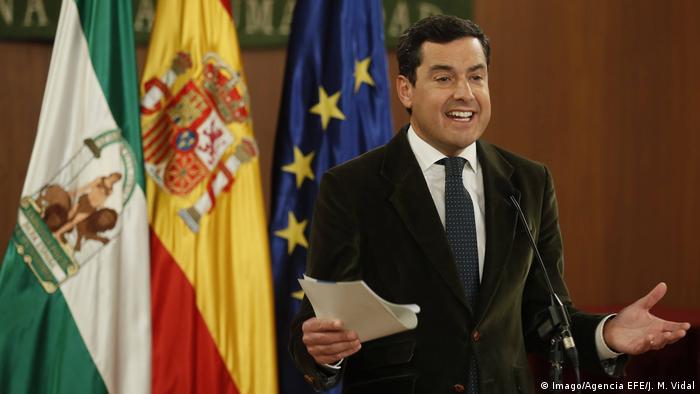 Juanma Moreno will become Andalusia's new leader under the deal

The small but increasingly influential Vox party, which campaigns on a nationalist, anti-feminist and anti-immigrant agenda, agreed to support a center-right coalition in Andalusia on Wednesday.

"Today illegal immigration and corruption lose (…) and the Andalusians, the defense of the family and a more pluralistic politics win," Vox deputy leader Javier Ortega said.

Vox was thrust into the role of kingmaker after it won 12 seats in an election held last month. While it won't officially be part of the Andalusian government, Vox's support for the conservative People's Party (PP) means the PP, together with the center-right Ciudadanos party, has enough support to form a coalition. It ends the run of the Socialist Party, which had governed the region for 36 years.

The 37-point agreement between Vox and the PP names Moreno to lead the government and includes commitments to tackle illegal immigration and reduce taxes. A divisive demand to repeal a domestic violence law was excluded from the deal.

Read more: Spanish far-right on the rise after gains in Andalusia?

After the December vote, Spanish Prime Minister Pedro Sanchez's minority Socialist government said if the main opposition parties relied on Vox's support to take office, they risked turning their region into a "cradle of the far-right."

"This government, in a moment in which some want to go back to the Spain of the black and white era, reaffirms its commitment to European values," a government spokesperson said on Wednesday in reaction to the agreement.

Until now, bitter memories of the military dictatorship of Francisco Franco, who died in 1975, had prevented far-right parties gaining ground in Spain's political mainstream since it became a democracy.

In a busy year for elections in Spain, polls suggest Vox is well-placed to win seats in other parts of the country. According to a poll published in the daily El Mundo last week, Vox would capture 12.9 percent of the vote if an national election were held now.