For the first time in decades, a far-right party has won enough votes to enter a Spanish regional parliament. The result is a blow to Socialist Prime Minister Pedro Sanchez, who was facing his first major electoral test. 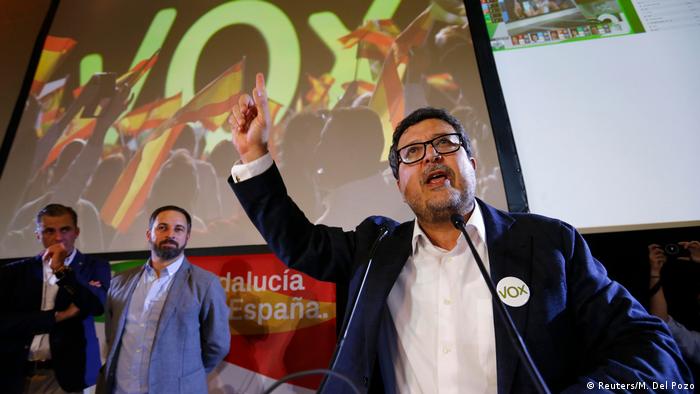 Spain's Socialist Workers' Party secured the most votes in Sunday's regional election in Andalusia, but fell well short of a majority. The far-right party Vox gained its first foothold in a Spanish parliament, and could have the power to keep the Socialists from forming a government.

Voter turnout was down, with only 46.5 percent out of the region's nearly 6.3 million voters casting a ballot by 6:00 p.m. local time (1700 UTC), according to local election authorities. That figure was down 5 percentage points from the last regional election in 2015.

Andalusia, Spain's most populous region, has some of the highest unemployment rates in Europe. It also serves as the main arrival point for migrants and refugees making the dangerous crossing over the Mediterranean Sea.

Pedro Sanchez takes over as PM

Sunday's election marked the first time the radical right Vox party has managed to win seats in a regional chamber. The anti-immigrant, anti-feminist and euroskeptic party was only founded four years, and could now prove to be a kingmaker in coalition talks.

"We are the ones who will bring about change and progress," Vox candidate Francisco Serrano (pictured) said at a rally in Seville.

It is also the first time in decades that a far-right party has entered a regional parliament in the country, which was long seen as immune from the nationalist wave sweeping other European countries. Many Spaniards still remember the military dictatorship of Francisco Franco, who died in 1975.

The election was the first major electoral test for the Socialists since Prime Minister Pedro Sanchez took office in June.

Sanchez managed to topple his predecessor, Mariano Rajoy, after winning a surprising vote of no-confidence this summer. The vote, called over a corruption scandal, removed Rajoy's People's Party from government.

Sunday's vote comes ahead of a "super election year" in 2019 that will see municipal, regional and European elections in Spain — as well as a possible early general election.

Two jailed Catalan leaders have accused Spanish authorities of failing to provide legal guarantees for a fair trial. Spanish prosecutors are seeking long prison terms for the duo's involvement in an independence bid. (01.12.2018)