Unlike in much of Europe, the far right in Spain has failed to gain electoral power. Europhilia, a culture of integration and lessons from the past seem to be key. Santiago Saez reports from Madrid. 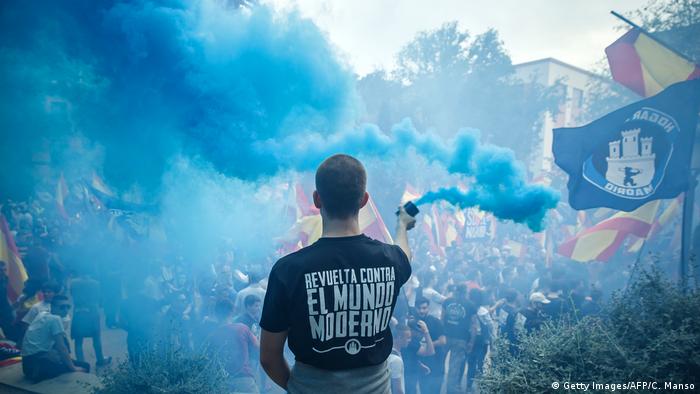 But their attack didn't spread to other mosques or to refugee centers or anywhere else in Spain. The group even denied in court that it had been an attack, calling their actions a peaceful demonstration against a "center used for terrorist recruitment."

It was par for the course. Just months earlier in December, far-right party Vox flopped in the face of a tremendous opportunity: general elections at a time of great political fragmentation. Poll after poll, Spaniards had expressed their dissatisfaction with traditional parties, corruption and unemployment.

In Europe, the far right appeared to be on the upswing. Marine Le Pen's National Front had won the 2015 regional elections in six out of 13 French departments, garnering over 28 percent of the vote. In the UK, the euroskeptic party UKIP won third place percentagewise in the general election the same year.

Vox, however, failed to win a single seat, bringing home only 0.23 percent of the vote. Then as now, Spain has remained an exception to the spread of far-right parties through most of Europe, including traditionally progressive countries such as the Netherlands and Denmark. A combination of markedly lower levels of immigration, Europhilia and history has shielded the southern country from the developments elsewhere on the continent.

It's not for lack of racism. Spain is as racist as any other EU country, says Moha Gerehou, a journalist, migrant rights activist and president of SOS Racismo Madrid, an NGO that works to eradicate xenophobia in the capital and its surroundings.

"The signs are the same, from racial profiling to difficulties renting a house or getting a job," he told DW.

Yet, opinion polls have reflected a decrease in xenophobic sentiment in Spain since high unemployment and economic crisis drove away large numbers of foreign workers. 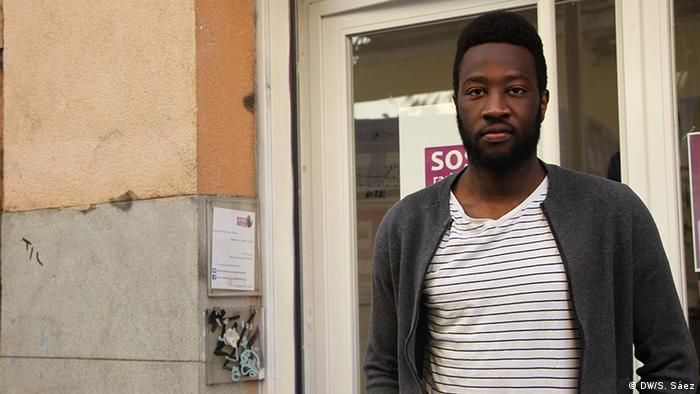 Gerehou says xenophobia is an issue in Spain as well

It is also a model of successful integration of Roma, one of the peoples of Europe that face the most discrimination, said Sara Gimenez of the Fundacion Secretariado Gitano. The country has been reaping the fruits of years of sound policies.

"Inequality persists, but our situation is much better than in other European countries, and that's because something has been done right over the years. We have had excellent social inclusion policies for decades, and we are seeing how those work now."

Spain is also less Islamophobic than its neighbors, said Carmen Gonzalez-Enriquez, a researcher at Elcano Royal Institute, a think tank. Moroccans have been one of the largest migrant communities in the country for decades, and, while suffering discrimination, they are not usually associated with terrorism.

"As a result of our experience with ETA's terrorism, most of us don't identify terrorists with the nation they belong to," said Gonzalez-Enriquez, referring to the Basque separatist group.

But Spaniard's do seem to identify with the European Union, or at least see value in it. While euroskepticism is on the rise, Spaniards are still some of the most enthusiastic supporters of the Brussels system.

For Gonzalez-Enriquez, the reason lies in the past: "During Franco's dictatorship, Spain was internationally isolated, and most Spanish people longed to be part of Europe. We consider globalization a good thing, while a large percentage of the French see it as something harmful."

Franco's dictatorship had another effect that continues to hinder the development of far-right parties, she said: The regime overused national symbols and identity "causing a countermovement which still persists." This is visible through society's rejection of the use of symbols such as the flag, which is associated by many, often on the left of the political spectrum, as representative of right-wing or conservative positions.

No space to the right

Xavier Garcia Albiol is an example. The PP Catalonia leader and former mayor of Badalona, a city in the Barcelona metropolitan area, became notorious for xenophobic remarks, which included referring to Romanian Romas living in the city as a "plague."

Such an approach doesn't leave space for parties to the right of the PP, whose leader is Spain's prime minister, said Gerehou. "The racist discourse has been often assumed by the People's Party … While [PP leaders] are not as straightforward as Marine Le Pen, many of their policies would easily be signed by the Front National." 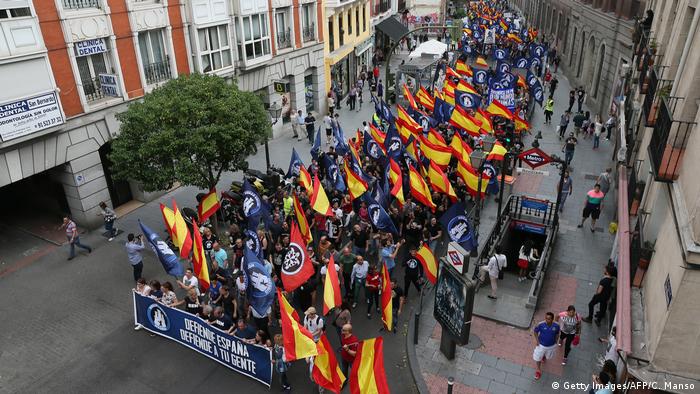 Gonzalez-Enriquez agrees, but thinks that far-right voters don't have critical mass: "Vox's experience proves that there is currently no chance for far-right groups. People with those ideas can either abstain or vote the conservatives, but even then they are not strong enough to influence PP's political behavior."

Read more: Gibraltar between rock and hard place on Brexit

But that could change. For those working on the ground, the far right is a real threat, represented by neo-Nazi groups such as Hogar Social Madrid, but also encountered at a real estate offices, where whites are offered better deals than blacks, and in the discourse of leaders such as Xavier Garcia Albiol.

"We have the image of a neo-Nazi as the far-right supporter," said Gerehou. "But today that's not true anymore. There are people with those ideas today who could be my neighbors or go to my gym, people I would have never imagined would think that way."