Spanish rapper Pablo Hasel's arrest has sparked protests in major cities, with critics calling his prosecution an assault on free speech. The artist was convicted for insulting the monarchy and glorifying terrorism. 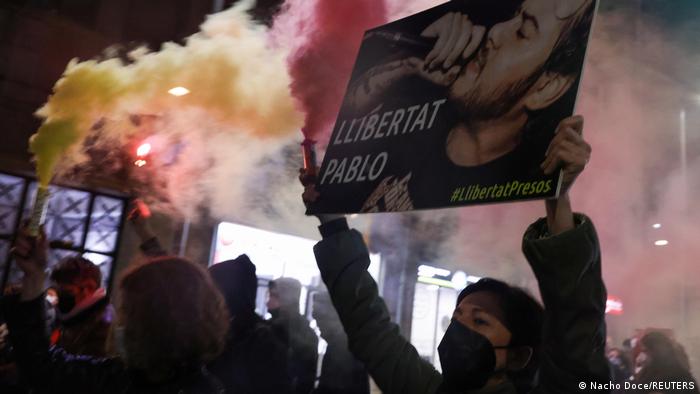 Thousands of people rallied in Barcelona waving banners and placards that said: "Freedom for Pablo Hasel."

Thousands of protesters took to the streets across Spanish cities on Tuesday evening demanding the release of a rapper arrested by police over a series of tweets in a controversial free speech case.

Police in riot gear stormed a university 150 kilometers (90 miles) west of Barcelona on Tuesday morning and arrested rapper Pablo Hasel, who had barricaded himself inside the campus to avoid jail.

Later in the day, around 2,000 people rallied in central Barcelona waving banners and placards that said: "Freedom for Pablo Hasel."

A handful of protesters also set trash cans on fire, erected street barricades, and threw stones, bottles, and firecrackers at the police, chanting slogans such as "Death to the Spanish regime."

Video footage on Twitter also showed police charging at protesters hurling objects at them, trying to disperse the crowd, in some cases using batons and foam projectiles.

Several stores and banks were damaged, and police stations in the Catalan capital were vandalized, with windows smashed and spray-paints on the walls.

The Catalan regional police Mossos d'Escuadra said on Twitter that protesters burned motorbikes and bins, creating barricades and blocking streets in Barcelona, adding that 14 people had been arrested.

Clashes in other cities

Similar incidents took place in Lleida where the rapper was arrested. Hundreds were seen scuffling with police and torching wheelie bins and a police motorbike, according to Spanish broadcaster RTVE.

Smaller demonstrations were also held in the eastern city of Valencia and Palma de Mallorca, with online footage showing a standoff between police and protesters in Valencia. 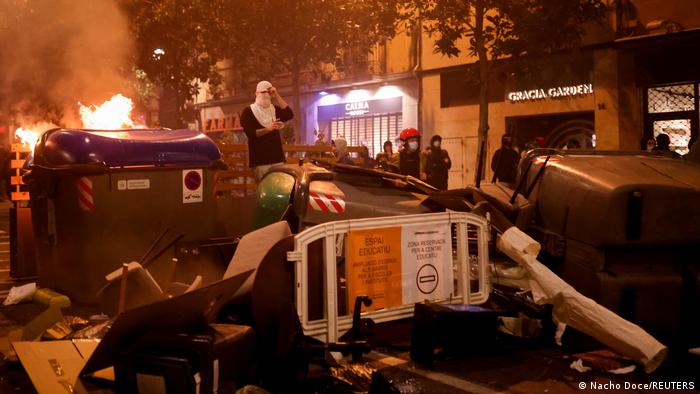 A handful of protesters in Barcelona set trash cans on fire, erected street barricades, and threw stones, bottles, and firecrackers at the police.

Police said protesters also engaged in scuffles in the northern city of Girona, while footage on Twitter showed a standoff between a handful of police and protesters in the eastern city of Valencia.

He and more than 50 supporters locked themselves inside the university in Spain's northeastern Catalonia region at midday on Monday.

The 32-year-old rapper, whose name at birth is Pablo Rivadulla Duro, was sent to prison, where he is set to serve a 9-month sentence.

Hasel was convicted in 2018 for insulting the monarchy and glorifying terrorism.

At the heart of the issue was a string of tweets calling former king Juan Carlos I a mafia boss and accusing police of torturing and killing demonstrators and migrants. 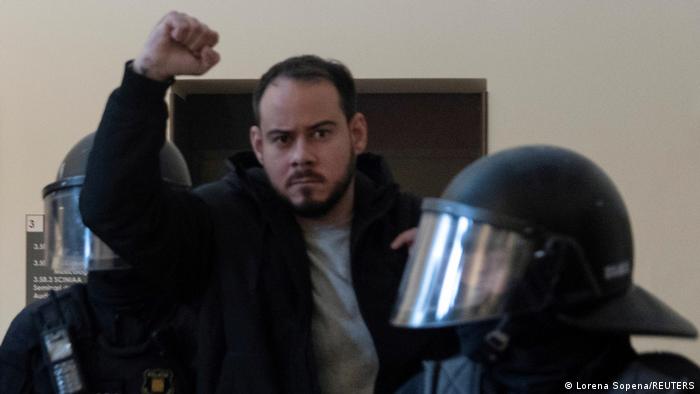 Rapper Pablo Hasel was escorted out of the building after a group of his supporters briefly clashed with the police in riot gear.

Hasel had been given until last Friday night to turn himself in to begin serving his sentence. He told news agency AFP on Friday that he had no intention of surrendering.

"I refuse to go of my own accord... so they will just have to come and kidnap me, which will show up the state for what it really is: a phony democracy."

He was escorted out of the building after a group of his supporters briefly clashed with the police in riot gear.

"They will never make us give in, despite the repression," shouted Pablo Hasel, 32, his fist raised as he was taken out of the building. "It is the fascist state that is arresting me. Death to the fascist state!"

The rapper is known for his hard-left views and his case has drawn increasing attention in Spain, with critics calling his prosecution a dangerous assault on freedom of speech.

He previously faced charges on at least four occasions for assault, praising armed extremist groups, breaking into private premises, or insulting the crown.

In 2014, Hasel was given a suspended 2-year prison term, but in a new case tried in 2018, he was handed down a reduced sentence of nine months for songs about Spain's former king and about 64 tweets he posted between 2014 and 2016.

Hundreds of artists, celebrities, and politicians have expressed their support for Hasel, demanding a change in the country's so-called "Gag Law."

His arrest was also denounced by Amnesty International, which called the jailing of the rapper for song lyrics and tweets "unjust and disproportionate."

"Pablo Hasel's imprisonment is an excessive and disproportionate restriction on his freedom of expression, but he is not alone in suffering the consequences of unjust laws," the NGO wrote on Twitter.

"All those who consider themselves progressives and boast of (Spain's) 'full democratic normality' should be ashamed," the party tweeted. "There is no progress if we refuse to recognize our existing democratic shortcomings."

The pro-union Socialist Party is set to claim the most seats in the Catalan parliament, but the faction will also face a stronger separatist bloc. Party leader Salvador Illa said it was time to "turn the page."

Parts of Spain have been covered by a rare snowfall, causing traffic disruption and canceling flights, as the country records the lowest temperature in its history.

A residential building has been seriously damaged by an explosion in Madrid. At least two people died in the blast, apparently caused by a gas leak.

A Belgium court has ruled that Spanish rapper Valtonyc will not be extradited, arguing that his offenses — allegedly glorifying terror — were not a crime under Belgian law.