The pro-union Socialist Party is set to claim the most seats in the Catalan parliament, but the faction will also face a stronger separatist bloc. Party leader Salvador Illa said it was time to "turn the page." 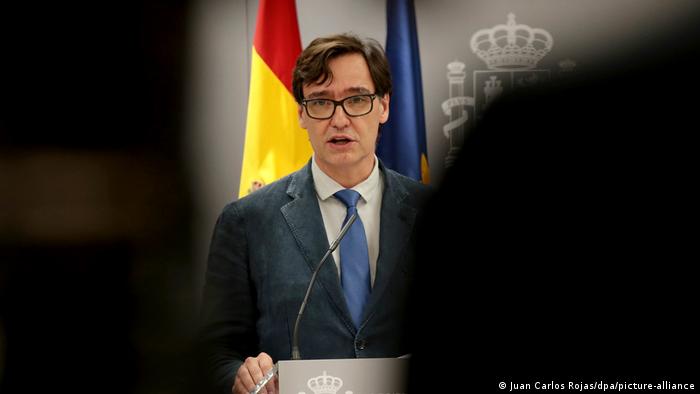 Salvador Illa is an ally of Spanish President Pedro Sanchez

The Sunday vote in Catalonia saw the pro-Madrid Socialist Party claim a narrow victory ahead of the secessionist Republican Left, although both parties are set to command an equal number of seats in the region's 135-seat parliament.

The Socialists won over 625,000 votes, giving them 33 seats, with over 99% of ballots having been counted. The Republican Left only claimed some 580,000 votes, but is also expected to have 33 lawmakers in the assembly. Another pro-independence party, the center-right Junts, would receive 32 seats, with another nine going to the left-wing CUP, which is also in favor of secession.

In total, the separatist bloc boosted its parliamentary presence from 70 lawmakers in 2017 to 74 following the Sunday vote.

The far-right Vox Party will enter Catalonia's regional parliament for the first time, winning 11 seats. The conservative People's Party is only expected to receive three seats.

How did the Socialists react?

The Socialist Party in Catalonia is led by ex-health minister Salvador Illa, who is an ally of Spanish Prime Minister Pedro Sanchez. The Sunday result show the PSC, as the Socialists are known in the region, nearly double its number of lawmakers compared to the 2017 vote. The 54-year-old Illa praised the outcome as a "clear victory."

"It is time to turn the page, to write a new chapter, to reach out to one another and advance together," Illa said on Sunday.

The vote across the troubled region of Catalonia  was widely seen as a test for the separatist forces.

What triggered the vote?

Earlier opinion polls had predicted a tight race against parties not in favor of secession. The PSC, which represents the nationally-governing Spanish Socialist Workers' Party PSOE in the Catalan parliament, was expected to snag at least 20% of the vote. The center-left PSOE opposes Catalonia's secession from Spain, but supports dialogue between Barcelona and Madrid.

Two separatist parties have been heading a minority government in the regional parliament — the left-wing Esquerra Republicana de Catalunya and the center-right Junts.

The minority government called for a new election after regional president Quim Torra was suspended from office by the Spanish judiciary in September. He was removed after refusing to take down pro-independence symbols from public buildings.

How did the pandemic impact the vote?

Some 5.3 million people in Catalonia were eligible to vote, but concerns about the pandemic might have led to a historically low voter turnout.

Due to the coronavirus pandemic, officials recommended that voting times were staggered. Those who are deemed high risk were encouraged to vote in the morning, leaving the general population able to vote in person from noon until 7 p.m.

Those who are COVID-19 positive, in quarantine or living with an infected person were then to vote in the last hour before polls closed.

Voters had to wear face masks, keep their distance while in line and use disinfectant provided at polling stations.

In 2017, Catalonia sparked Spain's biggest political crisis in decades after separatist leaders held an independence referendum, despite courts ruling that the vote was unconstitutional.

Following a short-lived declaration of independence, the wealthy region was placed under emergency measures by Spain's central government. Catalonia's regional president at the time, Carles Puigdemont, fled to Belgium while other separatist leaders were sentenced to prison.

A previous version of this article stated gave the political stance of CUP as far-right rather than left-wing to far-left. This has now been corrected. We apologize for the error.

All access to the Catalan region of Lleida has been closed again after a surge in COVID-19 clusters. Most of the new outbreaks are linked to the chaotic situation of 30,000 foreign day laborers.

Catalonia's regional government plans to hold its independence referendum on Sunday. But separatist movements are not unique to Spain: Several other European regions have aspirations of becoming autonomous.