Quim Torra has lost an appeal against his current conviction for disobedience and will have to step down. Pro-independence organizations have urged citizens in the region to protest the ruling. 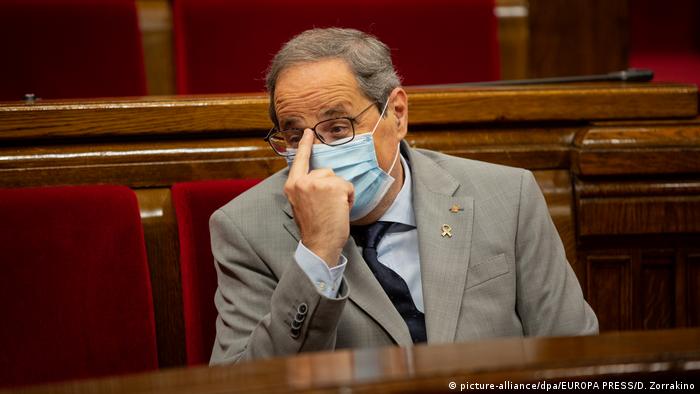 Torra was convicted in December of last year for refusing to remove a banner with separatist slogans from his government's headquarters in the run-up to the April 2019 general election. This was despite repeated appeals by the Spanish election board on grounds that it violated institutional neutrality.

The ruling means that Torra's deputy, Pere Aragones, would now take over as interim president until a new election is held.

Pro-independence organizations rejected the ruling and called for protests this week.

"The disqualification of Quim Torra is a serious attack on the self-government of Catalonia," separatist group Omnium Cultural said, accusing the Spanish government of waging a "dirty war against independence."

Quim Torra is a staunch supporter of the region’s separatist movement. He became Catalonia's president following the 2017 push for independence from Spain, which led his predecessor, Carles Puigdemont, to flee to Belgium.

Puigdemont was removed from his presidency for holding the 2017 independence referendum and issuing the region’s independence declaration.

Spain’s top court said Torra had ''stubbornly'' disobeyed the country's electoral board by refusing to take down a banner — supporting a dozen former Catalan Cabinet members, lawmakers and activists tied to the 2017 declaration — from a balcony in the regional government's headquarters.

According to recent polls and past election results, Catalans are roughly split on the question of whether it should become independent from Spain.