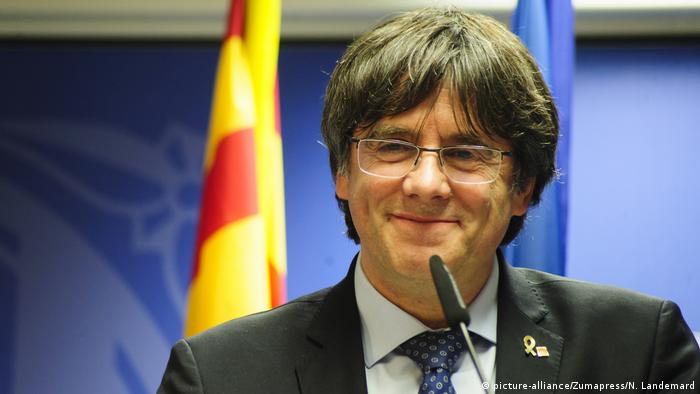 Belgium will not extradite Catalan separatist leader Carles Puigdemont to Spain after a judge on Thursday suspended the arrest warrant against him and fellow pro-independence politician Antoni Comin.

"Belgian justice recognizes our immunity and decides to suspend the arrest and extradition warrant!" Puigdemont wrote on Twitter.

His lawyer, Simon Bekaert, said that the judge also decided to "withdraw any conditions" on the two politicians' freedom.

"He decided that as long as the European Parliament has not waived their immunity, the legal proceedings regarding their extradition can not go on," Bekaert told news agency dpa.

Spanish authorities have charged the two politicians with rebellion and sedition over their role in the 2017 independence referendum in Catalonia, which Madrid ruled illegal.

Puigdemont and other exiled pro-independence politicians were elected members of the European Parliament in May last year.

Last month, the European Court of Justice (ECJ) ruled that as European lawmakers, the Catalan politicians have the right to immunity from prosecution. That immunity can be removed, however, if Spain requests it and if other MEPs agree.

Puigdemont and Comin have not yet been allowed to take their seats in the European Parliament — but it remains to be seen whether Thursday's decision will permit them to do so.

A third pro-independence politician, former regional vice-president Oriol Junqueras, was also elected as an MEP but is been serving a 13-year prison term in Spain for his role in the referendum. The European Union's top court also ruled that he should be allowed to take his seat and be granted immunity from prosecution.

Puigdemont served as the regional president of Catalonia from January 2016 and October 2017. He later fled Spain after trying to declare independence based on the results of the banned referendum. He and other pro-independence politicians fled to Belgium, where they have been living in exile since.

Besides Junqueras, 11 other pro-independence lawmakers were found guilty of sedition and eight of them also received prison sentences.