Parts of Spain have been covered by a rare snowfall, causing traffic disruption and canceling flights, as the country records the lowest temperature in its history. 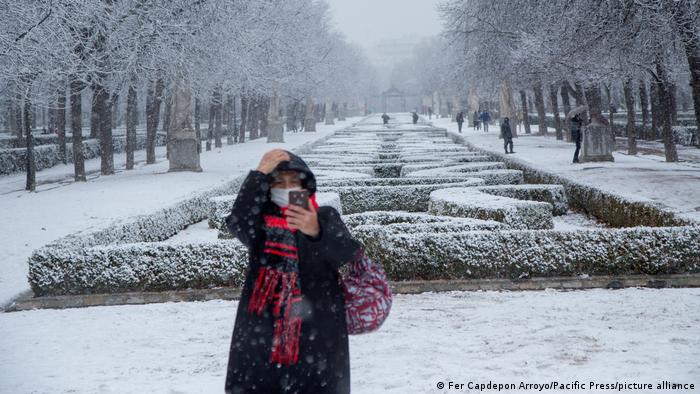 The snow in Spain is expected to last until Sunday

Madrid and other parts of Spain were blanketed in snow on Thursday as the southern European country witnessed record low temperatures due to Storm Filomena, forecasters said.

"If the forecasts are confirmed, we could be facing one of the most extensive snowfalls in recent years," said Ruben del Campo, spokesman for Spain's AEMET weather agency.

Snow fell heaviest in the northern and central parts of Spain. AEMET issued a code orange warning for most Spanish regions and a code red for three provinces in central Spain.

Storm Filomena also hit the Canary Islands and the southwestern coast of the peninsula, bringing unusually intense winds and rain, according to AEMET.

The rare snowfall caused traffic disruption on at least 200 roads and delays in public transportation.

Spain on Thursday recorded the lowest temperature in its history at -35.8 degrees Celsius (-32.44 degrees Fahrenheit)  in Leon, about 400 kilometers (about 250 miles) north of Madrid, according to regional meteorological institute Noromet.

The temperature on Wednesday at the Clot de la Llanca ski station in Catalonia, in the central Pyrenees mountain range, had reportedly reached -34.1 degrees Celsius.