Strife in South Sudan has been ongoing since 2013. Hundreds of thousands of refugees have tried to escape the humanitarian crisis by fleeing to neighboring Uganda. Now camps there are struggling to cope. 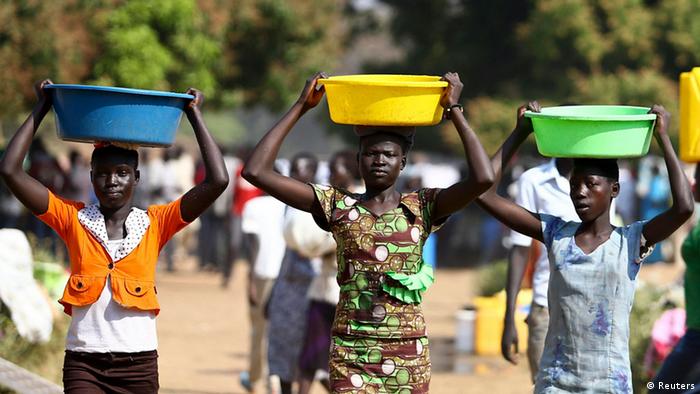 For many refugees from South Sudan, Nyumanzi Transit Center in northern Uganda is the first port of call. The fighting in their country has forced them to make the arduous journey to Uganda on foot or in crowded trucks.

The center is just one of many camps in Adjumani, a district near the border with South Sudan. When the new arrivals reach Nyumanzi, they are registered by the UN Refugee Agency UNHCR. But for many, the journey doesn't end in Nyumanzi. The camp is overcrowded. Many refugees have to be moved to other camps nearby.

According to aid agencies, around 75,000 people have fled from South Sudan to Uganda since the end of 2013. They hoped to escape the brutal fighting between Salva Kiir's South Sudanese government troops and the followers of the former South Sudanese vice president Riek Machar.

A steady stream across the border

In April alone, the Red Cross reported that 1,000 refugees were arriving in Uganda every day. According to Fred Opoka from the aid agency World Vision, 65 percent of the refugees are children. World Vision makes a particular effort to cater to their needs.

"The biggest challenge that the refugees here continue to face is a lack of opportunity for learning," Opoka said, highlighting that primary school children from fourth to seventh grade suffer particularly. "The nearby community schools are overwhelmed and cannot provide effective support to the South Sudanese refugees." 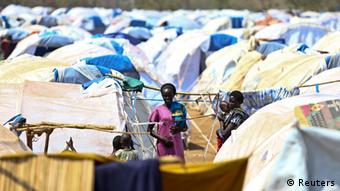 A refugee camp in the Adjumani district of northwestern Uganda

The refugee children attend class in the camp's provisional schools. Along with traditional subjects, they also learn about health and nutrition. One of their teachers is Anyieth Deng. For a month now, she has been teaching reading, writing and math. Classes are held in English as well as in Dinka, the language of the biggest ethnic group in South Sudan.

Anyieth Deng says the pupils in her class are slowly beginning to relax and forget what they have been through. "When they arrived, they were fearful of what would happen to them. But they are now forgetting what happened before. So there is some improvement," she says.

There are up to 500 pupils in Deng's class. The refugee camp doesn't have enough teachers. Huge tents serve as classrooms for the mass lessons. For the refugee agencies, it is important to do more than just feed the children. They also want to provide them with a regular daily routine.

A safe place to live and to learn

Many of the South Sudanese refugees in the camps had hoped that the conflict in their country wouldn't last long. But tensions there haven't eased. The aid organizations had initially counted on the refugees merely needing a temporary solution to their problems. According to Fred Opoka from World Vision, his organization had only planned aid for six months. Now, the money is starting to run out. Opoka is afraid that World Vision may have to cut or even shut down its relief program. 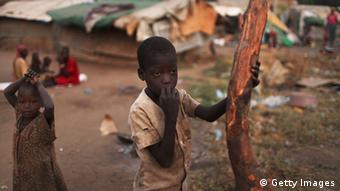 Refugee representative Mabior Deng thinks that would be a huge loss for the South Sudanese currently in the camps. After all, the children in Uganda are doing better than those still in war-torn South Sudan. They now have a safe place to live, eat and go to school. "The children were desperate, they were traumatized, because they came from a war zone," said Deng, who is from South Sudan himself. Aid organizations had created a child-friendly environment, he added. "The children now are happy, they are really beaming."

All the while, the situation back home is worsening. On Wednesday (06.08.2014), the United Nations announced that it is evacuating 220 staff and aid workers from South Sudan after local militias killed at least six relief workers.

The refugees don't know if and when they can go back home. Along with political strife, there is also a cholera epidemic raging in South Sudan. According to UN estimates, South Sudan is the country where the most extensive humanitarian campaign is currently taking place. But the measures are not enough to prevent an impending drought. The UN estimates that almost four million people would be affected by the resulting famine.

Politically, the situation in South Sudan remains in turmoil. President Salva Kiir's government and his rival Riek Machar have not been able to agree on a power-sharing deal. The peace talks between the parties were resumed on Monday in Ethiopia. So far, they have remained fruitless.

Wheeler: 'An arms embargo would help'

The civil war in South Sudan is one of the most brutal conflicts in recent history. Those responsible for the ongoing violence must be brought to justice, says Skye Wheeler from the advocacy group Human Rights Watch. (08.08.2014)

The UN is warning of a famine in war-torn South Sudan where more than a million people have been displaced. Many can no longer work in the fields in a country where 95 percent of the population depends on farming. (29.07.2014)