Wheeler: 'An arms embargo would help'

The civil war in South Sudan is one of the most brutal conflicts in recent history. Those responsible for the ongoing violence must be brought to justice, says Skye Wheeler from the advocacy group Human Rights Watch. DW: Human Rights Watch has just published a report that documents atrocities in South Sudan by both government troops and rebels. (Photo above shows a refugee camp). What crimes exactly have been perpetrated in the ongoing conflict?

Skye Wheeler: Many crimes have been committed by both government forces and by the opposition. It began here in Juba, in the capital of South Sudan. And almost as soon as the fighting began in December 2013 we began to document targeted attacks, killings, mass arrests, cases of torture of people from the Nuer ethnic group. Within a few days the conflict had spread to other parts of South Sudan. And again and again we documented how forces from both sides attacked civilians, shot them, often because of their ethnicity ,or because of their presumed allegiances, and killed them in really brutal and horrible ways.

Do you have any explanation why this conflict is so bloody and so brutal? 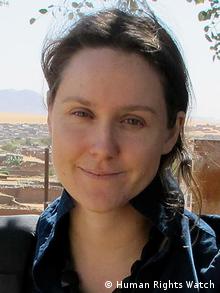 Yes. It is because of impunity. South Sudan has been on and off in conflict for 70 years. South Sudan's history is full of abuses against civilians and no one has ever been held accountable for this kind of brutality.

What should be done in order to prosecute those that are responsible for possible war crimes?

We have in place right now an African Union commission of inquiry, headed by former Nigerian president Olusegun Obasanjo. They should recommend some kind of justice mechanism to ensure that people this time are held to account for what happened. South Sudan's judiciary system is quite weak and so far we have seen no significant political will at all to hold anyone to account for what happened. So we probably do need to see some kind of international assistance on the justice front.

Has the scope and magnitude of these crimes been underestimated by the world so far?

Yes. There have been many places where we believe very extensive abuses against civilians occurred. But we do not know about all that has happened.

You have rather good evidence from towns. What about villages? It is not easy to reach som of the more remote villages where crimes probably happened too. How did you collect evidence for the report?

We spoke to more than 400 victims and survivors and witnesses from different towns. And the UN has a very large human rights team as well. And they also have documented very widespread abuses. But it is true: there have also been attacks on large rural areas, many villages and smaller towns have also been attacked. We understand that civilians have also been killed and there has also been widespread pillage in those areas. But we have a less good understanding of how extensive the war crimes have been outside of big towns.

As we speak the conflict is still ongoing, weapons are still coming into the country - how can that be stopped?

Who is providing weapons for the conflict parties?

There is no shortage of arms in South Sudan. We understand that the government has recently bought a large number of new arms from China. But an arms embargo would help stop more guns and other arms from flowing into this country which should help prevent further abuses against civilians in which is already a very, very abusive conflict.

Skye Wheeler is the South Sudan researcher at Human Rights Watch. She is based in the country's capital city Juba. This interview was conducted by Peter Hille.

Schmidt: 'There has never been a peaceful year' in South Sudan

Father Gregor Schmidt is a German Catholic priest and missionary. He has been working in South Sudan since 2011, when it became an independent state after years of civil war. (01.08.2014)

The UN is warning of a famine in war-torn South Sudan where more than a million people have been displaced. Many can no longer work in the fields in a country where 95 percent of the population depends on farming. (29.07.2014)

Oloo: "US-Africa summit a signal of strong partnership ahead"