A South Korean judge has found the former President Park Geun-hye guilty of abuse of power, as well as the crime of coercion. She has been sentenced to 24 years in prison. 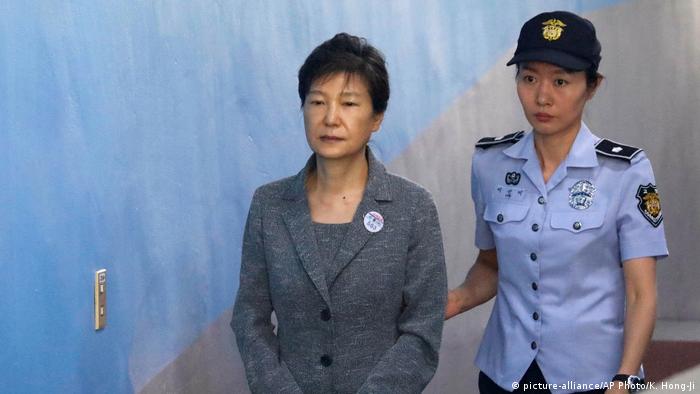 Park was sentenced to 24 years imprisonment and given a fine of 18 billion won (17 million dollars, 13.9 million euros).

"The defendant abused her presidential power entrusted by the people, and as a result, brought massive chaos to the order of state affairs and led to the impeachment of the president, which was unprecedented," said Judge Kim Se-yoon.

Read more: Choi Soon-sil – the woman who brought down a government

The former president has been held at a detention center near Seoul since she was arrested in March 2017. She has refused to attend, citing illness and claiming that the proceedings have been brought for political motives.

As she was being sentenced, supporters gathered waving South Korean and US flags. One of Park's policies was taking a tougher line on North Korea, while strengthening military ties with the US. 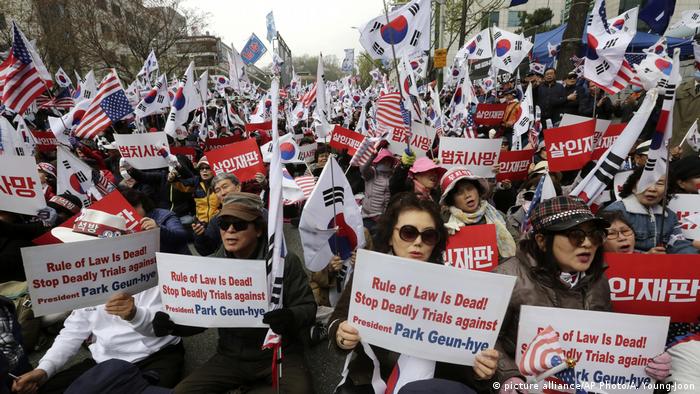 Park, who became South Korea's first female president in 2013, was impeached for corruption after weeks of demonstrations calling for her to step down.

The court concluded that Park had colluded with her friend Choi Soon-sil, giving her unwarranted access to the business of government. Choi was alleged to have taken tens of millions of dollars from conglomerates in return for policy favors.

Park was found to have colluded with Choi to pressure 18 business groups to donate a total of 77.4 billion won to help launch two foundations controlled by Choi.

The 66-year-old politician was elected to the country's national assembly five times. She is the daughter of Park Chung-hee, the former dictator who ruled South Korea from 1961 to 1979.

After her impeachment in December 2016, Park was removed from office by South Korea's constitutional court in March 2017 and, as a result, lost her immunity from prosecution.

South Korea has been gripped by the spectacular fall from grace of Park, a conservative icon who had assumed the role of an incorruptible "Daughter of the Nation."

Choi was tried separately by the same court and, in February, was sentenced to 20 years in prison.

Among the other figures who were implicated in the scandal was Samsung heir Lee Jae-yong, who was initially sentenced to five years in jail last year. Although the term was reduced to a suspended sentence on appeal, Lee — son of Samsung group boss Lee Kun-hee — spent almost a year in jail.