The Constitutional Court in Seoul has upheld the decision to remove President Park Geun-hye from office following a corruption scandal. A new election will have to be held within 60 days. 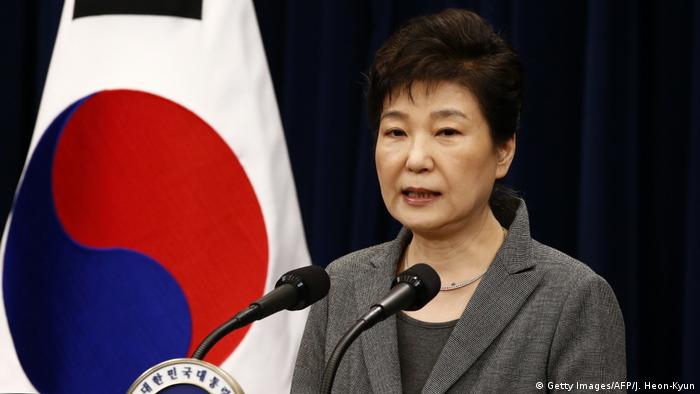 The Constitutional Court formally removed President Park Geun-hye from office in a ruling on Friday. In a unanimous verdict, the eight-judge panel upheld the legal decision which means she loses her presidential immunity from prosecution.

Chief Justice Lee Jung-Mi said that Park's actions had "seriously impaired the spirit of representative democracy and the rule of law."

Park was impeached in December amid a corruption scandal. The president's close confidante Choi Soon-sil has been accused of extorting money from corporations such as Samsung. 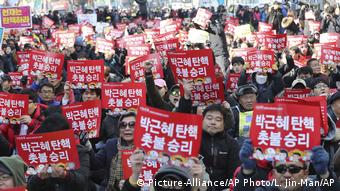 Anti-Park protesters gathered outside the Constitutional Court ahead of the Friday ruling...

Park has denied any legal wrongdoing and involvement in Choi's actions. The court, however, found that Park should be held responsible.

"Park concealed completely Choi's meddling in state affairs and denied it whenever suspicions over the act emerged and even criticized those who raised the suspicions," Justice Lee said.

While Park has been effectively stripped of power since December's parliamentary vote against her, with Hwang Kyo-ahn serving as acting president over the past three months, that decision is now formal. Park has thus far refused to cooperate with investigators. ... at the same time, hundreds of Park supporters came out to voice their support for the president

The South Korean Constitution requires for a new president to be elected within the next 60 days. The current favorite to win the vote is Moon Jae-In. The liberal politician had lost against conservative Park in the 2012 election.

Last month, one of Park's lawyers had said that there would be "a rebellion and blood will drench the asphalt" if Park were to be removed from office. Hundreds of people did gather outside the Court building on Friday protesting the court decision and thousands of police were mobilized in the capital.

South Korea has seen a series of large scale protests demanding Park's resignation, as well as pro-Park demonstrations against the impeachment, since corruption accusations against Choi and Park surfaced in Mid-2016.

The daughter of former dictator Park Chung Hee is the first South Korean president to be impeached since the northeast Asian country became a democracy in the late 1980s.

South Korea's acting president faces calls for impeachment after refusing to extend a corruption probe into his predecessor. Special investigators want an extension and the chance to question Park Geun-hye in person. (27.02.2017)

After her impeachment, South Korean President Park Geun-hye is both a perpetrator and a victim. Her future is uncertain as the country begins to recover from a political scandal. Fabian Kretschmer reports from Seoul. (09.12.2016)

Despite the impeachment of President Park, the political crisis in S. Korea is far from over. While the protesters continue to demand Park's resignation, the scandal has spilled over into the highest levels of business. (03.02.2017)

Park Geun-hye was due to serve 24 years for corruption and abuse of power following her impeachment in 2017. The current president said her pardon was in the interest of "national harmony."