Mass anti-Park protest in Seoul ahead of impeachment vote

Hundreds of thousands of people have gathered in Seoul for the sixth-straight week to demand the resignation of South Korean President Park Geun-hye. The protests come ahead of an impeachment vote in parliament. 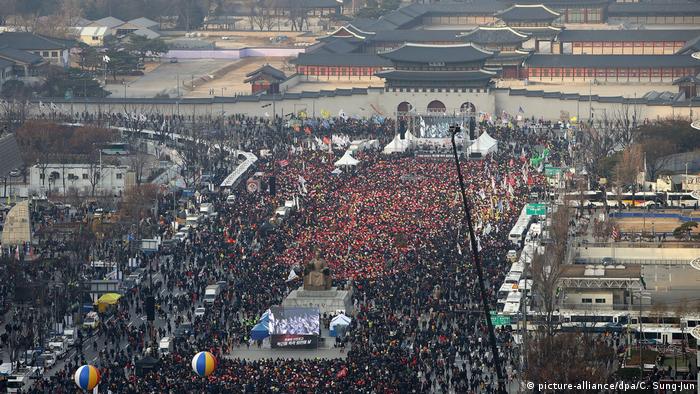 Massive crowds of people met in Seoul, South Korea, on Saturday for the sixth week in a row, calling for the ouster of embattled President Park Guen-hye.

The latest anti-Park demonstration drew hundreds of thousands of people to the capital and came hours after opposition parties filed an impeachment motion against Park. South Korea's parliament is set to vote on her impeachment on Friday.

The protest is set to culminate on Saturday with a candlelit march on the presidential Blue House. Seoul police said they deployed around 20,000 officers to control the demonstration.

Park, whose approval rating dropped to a record low of 4 percent last week, is accused of allowing her close friend Choi Soon-sil to meddle in state affairs.

Park is also suspected of colluding with her friend to put pressure on top Korean companies to donate to two foundations controlled by Choi.

She has repeatedly apologized for the scandal but denies any criminal wrongdoing. 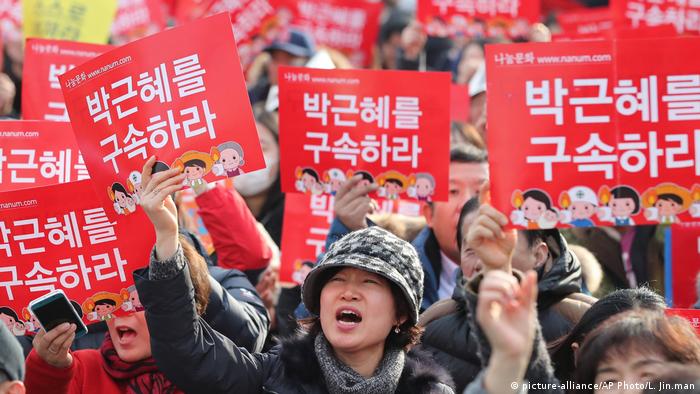 Hours earlier on Saturday, South Korea's opposition parties introduced an impeachment motion against Park. The measure was backed by 171 of the 300 lawmakers in the National Assembly.

A two-thirds majority is required to impeach Park and will need the support of 28 lawmakers from Park's ruling Saenuri Party. If approved, the motion would still have to go through the Constitutional Court in a process that could take up to six months with no guarantee of how the justices would rule.

If Friday's vote is successful, Park would be the first democratically elected leader in South Korea to be expelled from office.

On Tuesday, Park said she was prepared to resign, but would let parliament decide her political fate. Her Saenuri Party proposed she resign in April to allow for new elections in June.