After her impeachment, South Korean President Park Geun-hye is both a perpetrator and a victim. Her future is uncertain as the country begins to recover from a political scandal. Fabian Kretschmer reports from Seoul. 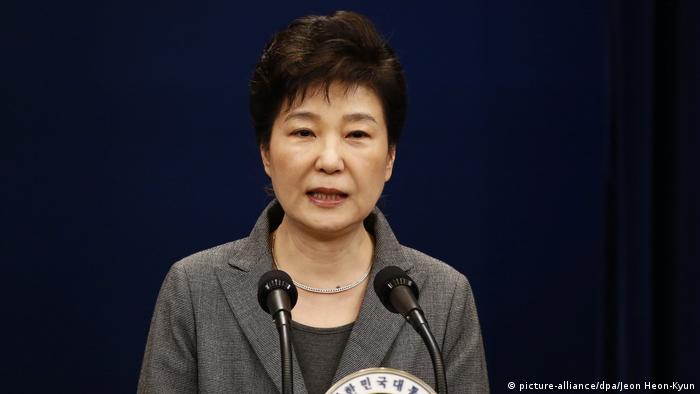 "Regardless of political affiliation, the public is watching what is happening right now in parliament with a lot of concern and they hope it won't happen again," said the parliamentary speaker for the impeachment proceedings.

The president also made a quick appearance in front of the television cameras and called on her ministers to minimize the vacuum of power and keep the country from further turmoil. The 64-year-old Park was visibly affected by the decision - speaking with a hoarse voice while looking down with dark rings around her eyes.

For the next weeks, and even months, Prime Minister Hwang Kyo-ahn will take over governing and assume control of the military. The Constitutional Court now has 180 days to formally confirm the decision of the National Assembly. And it could also take many months for new elections to take place.

Pressure on the parliament

In front of the parliament building in Seoul, the decision for impeachment was met by cries of joy from thousands of demonstrators. Many of them spent the night in freezing temperatures in front of the entrance to the National Assembly. Among them were farmers who travelled on tractors to the capital.

Their goal was to put visible public pressure on members of parliament. This was also the strategy of the leftist opposition that originally put the impeachment proceedings in motion. Pyo Chang-won, a member of the Minjoo Party, published in November a list of Saenuri Party members that had spoken out against impeachment.

Shortly thereafter telephone numbers of the "pro-Park faction" were shared on social media, and angry citizens called the politicians until deep in the night to get them to change their minds. Their message was clear: Whoever votes for Park Geun-hye, votes against the people.

In fact, public anger against Park has grown recently. According to a recent survey, 78 percent of all South Koreans supported Park stepping down immediately. Only 4 percent were for her remaining. On Friday, many members of parliament even took pictures of their ballot in the voting booth to show on social media as evidence that they indeed voted for impeachment proceedings.

Some South Koreans celebrate Park impeachment, while some mourn

Tens of thousands of people have held a celebratory rally after lawmakers voted to remove disgraced President Park Geun-h​ye. A protest against the move drew a far smaller crowd. (10.12.2016)

A developing political scandal in South Korea has given the North new reason to claim that the South is corrupt and that Pyongyang should be the "legitimate" ruler of the peninsula. Julian Ryall reports from Tokyo. (04.11.2016)

The decision comes in the wake of a drawn-out scandal involving Park Geun Hye's friend and confidante Choi Soon Sil. The Constitutional Court now has up to 180 days to decide whether to formally end her presidency. (09.12.2016)

The press is divided in its assessment. The left-oriented newspaper "Hankyoreh" describes the move as a resetting of Korean democracy. The conservative "Chosun Ilbo" criticizes the opposition as wanting to force "massive chaos" to generate political capital from the crisis.

The president as a tragic figure

After a month-long corruption scandal, Park's involvement with her childhood friend Choi Soon-Sil has proven to be a catastrophe. Choi is said to have collected donations from Korean companies amounting to over 60 million euros and used it for personal gain. She is also accused of having considerable influence on government business - without public knowledge and lacking any official function.

What is already known is that Choi received daily briefings from the presidency on highly confidential matters. She also wrote speeches for Park, chose her wardrobe and placed confidantes in key political positions. There was a lot of public speculation over the president really being a puppet with her friend pulling the strings.

In the history books, Park will probably go down as one of the most unpopular and possibly also unqualified presidents of South Korea. However, in the last few weeks it has become increasingly clear that Park is also a tragic political figure.

Is a prison sentence looming?

Park's life began with an imposing inheritance. She grew up as the daughter of Park Chung-hee - the "father" of the nation who led the country with a hard hand but to impressive prosperity. When Park Geun Hye was 22, her mother was assassinated. A few years later, her father was murdered by his own intelligence chief.

Park is said to have never fully recovered from this trauma. For most of her life, this dictator's daughter retreated socially and even broke all contact with her siblings. At 64, she lives alone and without children. In the meantime, her only loyalists in office have been fired or are imprisoned. Park's chef attested to her solitary lifestyle when he told Korean media that the president usually had dinner alone in front of the television.

But the loneliest chapter of Park's life could still be in front of her. Her impeachment also means that she has lost immunity from prosecution. The corruption scandal could also carry a prison sentence for the suspended president.