Less than six months ago, the name Choi Soon-sil was all but unknown in South Korea. Today, her face dominates the front pages of the papers and is on the television news everyday. But who is Choi Soon-sil? 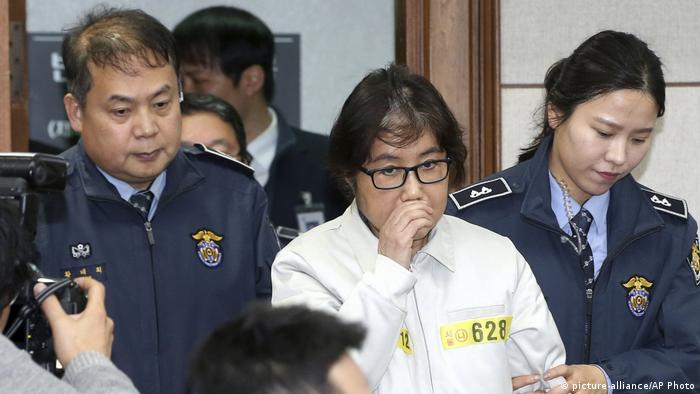 Choi Soon-sil is accused of influencing government policy and getting rich through extortion and manipulation - and bringing down the first female president of South Korea.

Choi is today in custody on charges of meddling in state affairs without holding a government position and using her connections with the president to extort vast sums of money from many of South Korea's best-known companies . Beyond the legal charges, she is being blamed with both effectively bringing down the government of President Park Geun-hye and leaving her reputation and political legacy in tatters.

The fall from grace of both women has been swift and cataclysmic. Neither is likely to recover their former status and standing, with Choi apparently heading for a prison sentence. 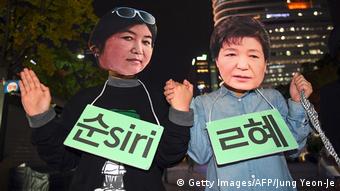 Park and Choi have known each other for several decades

Park may avoid that fate, but her name will forever be tainted by a long association with a woman who is now derided as a fake shaman and fraudster, and branded South Korea's Rasputin.

"It is utterly scandalous," is the assessment of Rah Jong-yil, a former ambassador to both Tokyo and London, of the last six months in Korean politics.

"Choi has used her position as a confidant to the president and taken appalling advantage of that situation," he told DW. "She was able to extract all sorts of benefits from big corporations, she has arranged privileges for herself and her daughter, she gained entrance for her daughter to a top university and then arranged for her to get credits for classes that she never attended.

"This is a terribly far-reaching scandal that has grown to envelope the presidential Blue House, the government, bureaucracy, the educational establishment and, ultimately, society at large," he said.

"It has all been compromised thanks to Choi's relations with the president, and it will take a long time for us to recover from this, I fear," he added.

With a note of incredulity in his voice, he admits that almost no-one in South Korean society was aware of Choi until recently. Yet she has been hovering in President Park's shadow for decades.

Born in June 1956, Choi is the daughter of a Choi Tae-min, who was a Buddhist monk who converted to Catholicism before creating his own religious group called Yongsae-gyo, or the Church of Eternal Life. Choi - who was married six times and used at least seven different names - declared himself to be a "future Buddha." 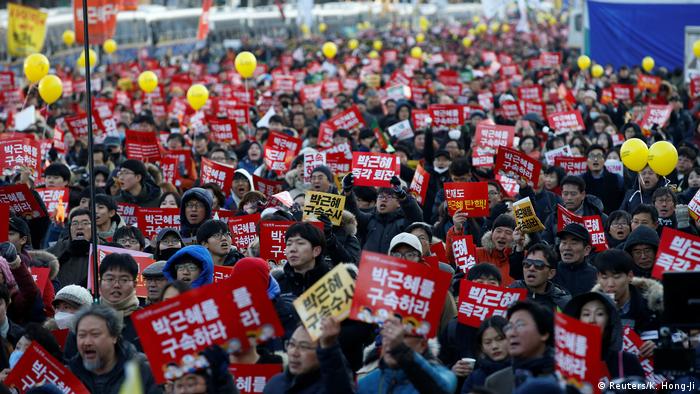 The president was impeached over a multifaceted corruption scandal in December

Considered an arch-opportunist, Choi befriended the 22-year-old Park when her mother, Yuk Young-soo, was assassinated by a North Korean sympathizer in August 1974 during an attempt on the life of her father, President Park Chung-hee. A little over five years later, Park Chung-hee was himself assassinated by his security chief.

Through her formative years, Choi Tae-min allegedly insinuated himself into Park Geun-hye's life until his own death in 1994. At that point, it appears that Choi Soon-sil picked up where her father had left off. Her former husband, Chung Yoon-hoi, also served as President Park's chief of staff.

"They have known each other for several decades, since the assassination of her mother, and Choi inherited from her father his personal and religious beliefs and helped to mould those of Park as she began to take up politics," said Rah.

"It is perhaps understandable that she sought support after the assassination of both her parents, but she has displayed very poor judgment and this is the tragic outcome," he added.

And the daily updates on the scandal only serve to underline the mistaken faith that Park placed in Choi.

What started out as an investigation in late October into the amount of input Choi had in speeches that Park delivered as president quickly snowballed. A significant portion of the national budget was steered into organizations that were ostensibly charitable foundations or shell companies, with companies encouraged to stump up funds in return for favorable business opportunities down the line.

Choi has allegedly controlled the budget for the upcoming Pyeongchang Winter Olympic Games, where her family owns large plots of land. She also allegedly had inside information on government plans to boost the real estate market and replaced anyone who opposed her decisions with cronies who did as they were told. 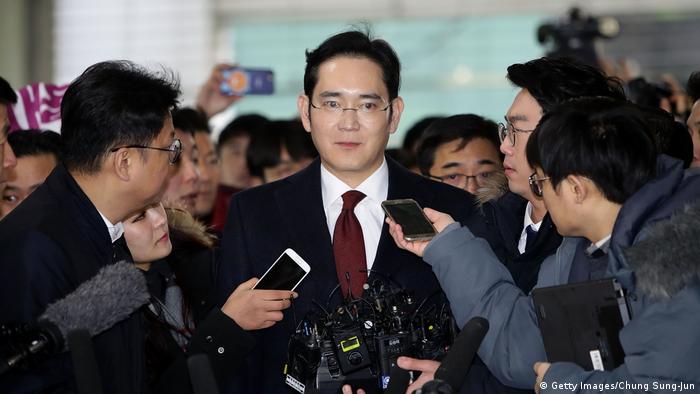 There are tales of influencing the media, ordering the purging of government officials who questioned policies, and arranging for at least one ambassadorial post for a businessman with no diplomatic or political experience.

Choi clearly has a soft spot for her daughter, Jeong Yoo-ra, and ordered the creation of an equestrian scholarship at the prestigious Ewha Womans University, despite Jeong not being a very good rider. There are stories of judges at one equestrian event she took part in during high school being arrested after they failed to award her the win. In other events, she was the sole contestant - and inevitably came first.

Jeong Yoo-ra barely attended university classes but was still awarded passing grades in all her subjects. One professor who dared to suggest that Jeong would fail because she did not attend sufficient classes was reportedly sufficiently terrified that she fled to the United States after a visit from Choi.

Jeong was in Germany when the scandal broke in Korea and swiftly went into hiding. She was located in Denmark in early January and is presently the subject of extradition procedures requested by Seoul.

Analysts say it is inconceivable that President Park had no inkling of what was going on around her.

"It is not clear that Choi and her father were actually grooming Park for the presidency, the power that would go with it and the benefits that they could accrue from their close ties with her," said Stephen Nagy, an associate professor of international relations at Tokyo's International Christian University.

"Politics and business overlap a great deal more in Korea than they do elsewhere and, in many ways, it comes as no surprise that someone like Choi could have so much influence or control over the president, both politically and personally.

"All this has tainted the legacy of a president who was feted as the first female leader of South Korea," he added. "I think it will be a long time before we see another woman in the Blue House."