Millions of South Koreans protested for Park Geun-hye's removal from office in response to corruption allegations in late 2016. The country's highest court removed her in March 2017. 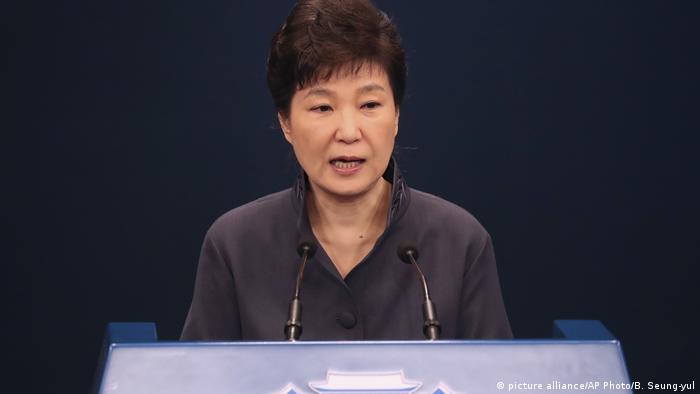 "We ask the court to hand down 30 years in prison and [a fine of] 118.5 billion won (€90 million; $110 million) for the accused, who must take the ultimate responsibility for the scandal as the 18th president of this country," prosecutors said in court.

Prosecutor Han Dong-hoon told the court that a long sentence was necessary "to send a message to the public and politicians that the tragic history should not be repeated."

The country's supreme court removed Park from office last March following the National Assembly's December 2016 decision to impeach her in response to the corruption allegations.

The Seoul Central District Court is expected to set a date for its final verdict later on Tuesday.

The 66-year-old Park was indicted last April on charges of bribery, abuse of power and leaking state secrets.

She is accused of both colluding with her friend Choi Soon-sil to pocket 60 billion won in bribes from three South Korean companies: Samsung, Lotte and SK. Prosecutors also allege Park granted Choi too much access to the government, despite the fact that Choi didn't hold an official office. Choi was sentenced to 20 years in prison in March and was ordered to pay an 18-billion-won fine.

Read more: South Korea's Choi Soon-sil – the woman who brought down a government

After the scandal broke out, millions of people took part in several massive demonstrations to demand Park's impeachment.

The scandal has also ensnared several former Cabinet members, presidential aides and business executives. Business executives involved in the scandal have walked away with lighter prison sentences. Samsung heir Lee Jae-yong was initially sentenced to five years in prison for offering bribes, but his sentence was ultimately suspended.

Park, South Korea's first female leader, was one of the country's most influential conservative politicians and was elected to the National Assembly five times. Her father was Park Chung-hee, a dictator who ruled the country in the 1960s and 1970s until his assassination in 1979.