South Korean women have taken to the streets to demand a crackdown on so-called spy-cam pornography. The online sharing of intimate photos and videos taken by secret cameras is considered an epidemic in the country. 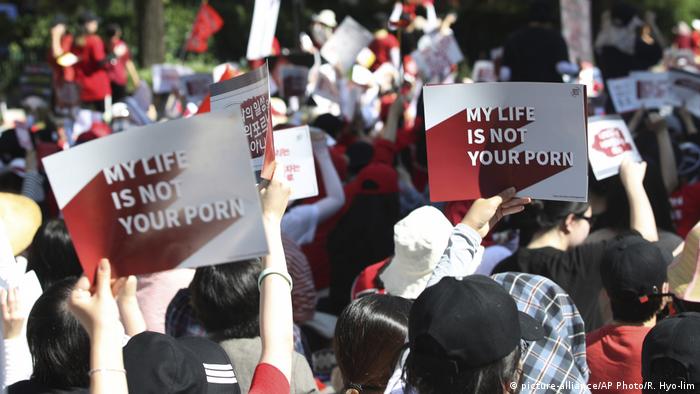 Thousands of women staged a rally through central Seoul on Saturday, calling on the government to implement harsher punishments for spy-cam offenses.

The use of tiny hidden cameras to film and photograph women without their permission has become an increasingly common problem in South Korea.

Organizers said around 55,000 women took part in the demonstration — one of the biggest-ever female-only rallies in the country. Police put estimated participation at 20,000.

Read more: 'Comfort women' — The wounds of their lives

Protesters described how many women lived in a constant state of anxiety, fearing footage filmed in a bathroom or beneath their skirt would be circulated online.

"I and my friends always look around to see if there are any suspicious holes on a wall or a door whenever we walk into a public toilet stall," a 22-year-old protester told the AFP news agency.

"What kind of country has South Korea become? A country where women can't even pee without having to worry about having their butts filmed in secret?"

President Moon Jae-in said in May that the epidemic had become a "part of daily life" in South Korea, and this week he ordered government officials to look into stricter penalties.

"We must make sure that the offenders suffer greater damage than the damage they inflict," Moon said.

Since 2004 smart phone manufacturers have been required to ensure the cameras on their devices make loud shutter sounds when taking pictures and videos. But peeping toms can still use apps to silence their phone cameras, or use tiny spy cameras that can be hidden in bathroom walls, on watches or on shoes.

South Korea and Japan have reached a landmark agreement on the latter's wartime sex slaves. The issue of "comfort women" - Koreans forced to work in Japan's wartime brothels - has long plagued ties between the neighbors. (28.12.2015)