In Seoul, former "comfort women" have decried South Korea's deal with Tokyo over Japanese wartime sex slavery. Protestors gathered around a statue that Japan wants to be removed. 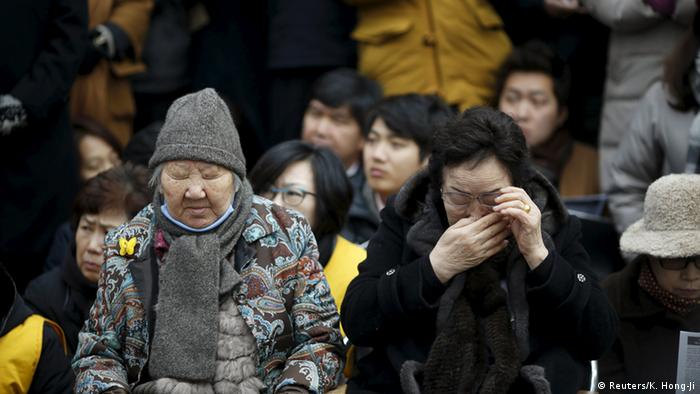 Some 250 protestors gathered on Wednesday at the statue outside Japan's embassy and denounced the deal concluded Monday as "humiliating."

For 7.6 million euros or one billion yen and reiteration of a Japanese apology, South Korea's government agreed to "finally and irreversibly" accept compensation for elderly survivors over the long-standing issue.

Former imperial Japan ruled the Korean peninsula harshly from 1910 until 1945 when it surrendered to Allied forces. 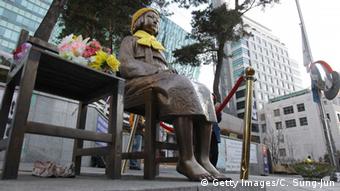 "Japan took us to be comfort women and still tries to deny its crime," Lee said as protestors milled around the bronze statue of a barefoot teenage girl, which symbolizes women forced to work in Japanese brothels.

Only 46 elderly survivors remain of the 238 women in South Korea who came forward in the early 1990s. Most of those vocal are reported to oppose Monday's deal.

South Korean activists said as many as 200,000 women, mainly Koreans, but also including citizens of China, the Philippines and what is now Indonesia, became sex slaves.

Japan's Asahi newspaper claimed on Wednesday that as one "precondition" of Monday's settlement South Korea's government had agreed to have the statue removed.

That was denied, however, by an unnamed South Korean official quoted by South Korea's Yonhap news agency.

South Korean Foreign Minister Yun Byung-Se said that only Seoul would "make efforts" to discuss its relocation with the Korean women's council that erected it in 2011.

A recent poll found that 66 percent of South Koreans opposed its relocation.

Facing criticism over the deal, South Korean President Park Geun-Hye has launched a campaign to win over public support.

And, in Japan, Prime Minister Shinzo Abe has faced further criticism from far-right activists and some newspapers for offering "anew his most sincere apologies and remorse" to South Korea as part of the settlement.

The United States, which has troops stationed in South Korea and Japan, has welcomed the accord after years of reluctance by Seoul and Tokyo to sharing sensitive military information.

A three-way pact was signed a year ago, under which South Korea sends information to the US, which in turn forwards it to Japan, and visa versa.