Kimchi: Koreans angry over attempted Chinese takeover | Asia | An in-depth look at news from across the continent | DW | 03.12.2020

South Koreans have leaped to the defense of a dish that has earned a reputation as the nation's "soul food," but which a Chinese newspaper contends is part of China's culinary culture. Julian Ryall reports. 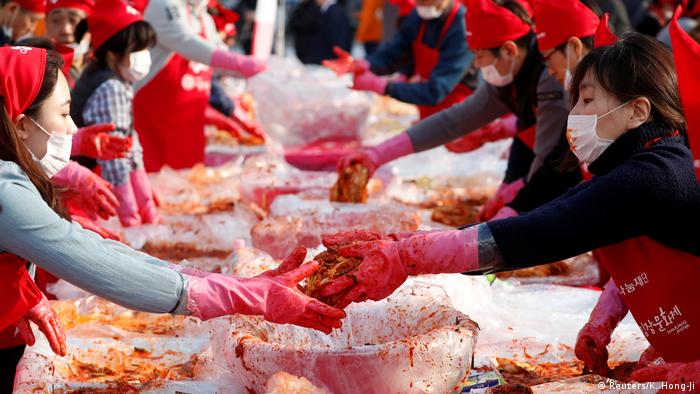 Social media users and South Korea's outspoken tabloid media have reacted with fury to a claim that China has been awarded certification from the International Organization for Standardization for "pao cai" — a pickled vegetable dish from Sichuan — as the definitive version of "kimchi," the spicy staple that is said to embody the soul of the Korean people.

In a provocatively worded article, China's state-run Global Times newspaper reported that the ISO had recognized "pao cai" as "an international standard for the kimchi industry, led by China."

The South Korean Agriculture Ministry was quick to dismiss Chinese claims, insisting that kimchi is not merely fermented cabbage but a central part of the nation's food culture and that the industrial standards for kimchi were recognized by the UN's Food and Agriculture Organization as long ago as 2001.

In addition, the ministry pointed out, the laborious and time-honored tradition of making kimchi — a process known as "kimjang" that involves washing and salting vegetables, saucing them with garlic, red peppers and cured fish before burying the concoction underground in clay pots — was designated as a UNESCO Intangible Cultural Heritage of Humanity in 2013.

In a statement, the ministry said the Chinese had been granted certification for pao cai, adding, "We need to understand that pao cai is different from kimchi."

That measured response was not sufficient for some Koreans, however, with the Chosun Ilbo newspaper claiming the move was part of China's "latest bid for world domination" and describing the Global Times as a "propaganda rag."

There was also fury on social media, with coverage of the issue on Naver particularly heated. One message read, "It is so frustrating to see the Chinese claiming so much of our heritage." Another said, "Historically, China has been the nation that has caused the most problems for the Korean Peninsula."

In a more pointed comment, another user wrote, "I am sure I hate China more than I hate Japan now!"

Read more: South Korea struggles to choose between US and China

Feelings were running similarly high on Twitter, with one user claiming that the Chinese should be ashamed for "not knowing world history." Another user called for a boycott of travel to China and all Chinese imports.

Others were more sanguine about the challenge to a cuisine that is a way of life to Koreans. "I laughed when I heard that the Chinese were trying to claim that their dish is the 'definitive' version of kimchi," said Ahn Yinhay, a professor at the Korea University in Seoul and a keen kimchi maker every autumn.

"I understand why this might make some people angry and encourage them to get on social media, but the truth is that Korean kimchi has been recognized internationally for many years. It's effectively synonymous with Korea and our culture and simply claiming it is Chinese is not going to make that change," she told DW.

"The claim is just absurd," she said. "The two things are completely different and the process of creating the two dishes is different. I'm not sure what the Chinese newspaper was even thinking, but perhaps we should not be surprised as it is a state-run publication."

Ahn said her family eats kimchi every day, sometimes as a side dish to every meal.

"It may sound strange, but kimchi is a big part of our cultural identity and it's the 'soul food' of the nation," she said, adding that every Korean mother is particularly proud of her efforts every autumn to purchase the all-important ingredients and then roping in the rest of the family to assist in the process.

Powerfully pungent to many outsiders, kimchi is an indispensable part of the Korean diet, with more than 2 million tons consumed every year. Often incorporated into stews and soups, kimchi is also served as a side dish and comes in more than 200 varieties.

More than 90% of South Koreans say they eat kimchi at least once a day, with over 60% having it at breakfast, lunch and dinner.

There was consternation this year, however, after a series of typhoons and the wettest and longest rainy season on the Korean Peninsula in living memory devastated crops and sent prices soaring.

As a consequence, napa cabbages, the main ingredient in preparing kimchi, were hard to come by in the autumn and prices soared 40% from last year.

The prices of other vegetables that are also incorporated into the fermented delicacy, including red peppers, onions and radishes, also rose as much as 70%.

The government was forced to release thousands of tons of cabbages held in the national stockpile to keep prices low enough for families already struggling with the impact of the coronavirus pandemic.

David Tizzard, a professor of education at Seoul Women's University, told DW that China's claim to Korea's national dish "comes at the worst possible time" as there are a number of bilateral issues that continue to dog the two nations' relations, while Koreans have also just completed the laborious task of preparing the kimchi stocks for the winter months.

"And that is on top of all the problems that have been caused by coronavirus to Korean society," he added.

"I think this was probably just a bit of mischief on the part of The Global Times, but there is a lot of rivalry in the region at the moment so I guess it's not completely surprising that some people have been offended," he said.

"But I think that if you ask the vast majority of South Koreans, they will just give you a blank look," he said. "It's nonsense. Korean people know that, and they don't need to be told that kimchi is Korean food. It just is."