Conservatives and religious groups are facing off with women's rights organizations in a fierce debate over changes to a 1953 law that makes abortion illegal. 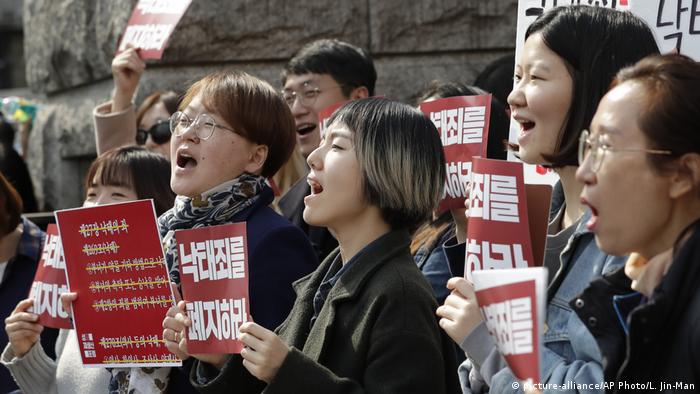 The South Korean government has announced plans to reverse the blanket ban on abortions that was imposed in 1953 and revise the law to permit a termination before the 14th week of a pregnancy. The proposed changes have been strongly criticized by both sides of the argument.

Last week, the government announced that it will alter sections of both the Criminal Act and the Mother and Child Health Act that refer to abortion. The changes will also allow abortions up to a maximum of 24 weeks for women with extenuating medical or economic circumstances, if a genetic disorder is identified in the baby or if they have been the victim of a rape.

The announcement comes after the Constitutional Court ruled last year that the criminalization of all abortions is in contravention of the constitution.

Conservatives and religious groups have taken issue with the court's ruling and the government's planned legal revisions on the grounds that all life is sacred and should be protected.

In the other camp, liberals and women's rights groups say the proposals do not go far enough and that the government is still dictating what a woman can choose to do with her own body.

And they warn that while punishments for illegal abortions have been rare in the last decade, the authorities may now choose to crack down on procedures that take place after the 14-week deadline.

By law, a woman can be punished by up to one year in prison or a fine of a maximum of 2 million Korean won (€1,477, $1,741) for having an abortion, while a medical worker who carries out the procedure can be sentenced to two years in prison.

Rights groups argue that limited sex education, including surrounding contraceptives, and broad disdain for condoms among Korean men — only 11% of men use condoms — mean that unwanted pregnancies are a serious problem.

According to the Health Ministry, 30 out of every 1,000 Korean women between the ages of 15 and 44 had an abortion in 2005, putting South Korea in the top three countries for abortions per capita in the world, only behind Russia and Vietnam.

Song Young-chae is a university professor and active in a human rights group backed by a Christian church and is adamant in his opposition to plans to change the existing law.

"I'm a Christian so this goes against my religious values, but it's more than that because it also goes against Korean values, our ancestors and society," he told DW. "Koreans and Christians will always value all life, even if it is unborn. So I cannot agree with the government's plans."

Song said there is growing opposition in conservative circles in Korean society to many of the government's left-wing policies, such as in education and attitudes toward homosexuality, as well as the South's relations with North Korea and the government's failure to condemn Pyongyang's human rights abuses.

Oh Kyung-jin, a coordinator for the Korean Women's Associations United, told DW that the government's approach to abortion has traditionally been about controlling the population "based on very conservative elements in Korea rather than to guarantee women's sexual and reproductive health and rights."

Oh said that despite the law, South Korean governments between the 1970s and 1990s quietly encouraged abortions in an effort to curb a booming birth rate and large families.

"However, since the first decade of the new century, the nation's low birth rate has become a serious social issue, with the abortion ban used as a tool to prevent women from having an abortion as the government stepped up enforcement of the law," she said.

Oh said women's groups across the country have been actively demanding the complete abolition of the ban, through rallies, online campaigns and sharing their own experiences of abortion.

"Today, it is recognized around the world that Korean women are acting and speaking up bravely when it comes to a wide range of gender equality issues, including abortion, the #MeToo movement, cyber sexual violence and so on," she said.

And while KWAU and other women's groups welcome a discussion of the abortion laws, they insist that the changes that have been proposed still fail to address the problem.

"Women's organizations are very critical of the plan as the government is still maintaining a policy of regarding women as the ones who need to be controlled, not individuals who have the right to decide their sexual and reproductive health," Oh said.

Activists are demanding that section 27 of the Criminal Act, which is titled "Crimes of Abortion," should be deleted in its entirety and that termination of a pregnancy is no longer considered a crime but a women's rights issue.

The South Korean government appears to have been taken aback at the hostility to its proposals on abortion, with the ruling Democratic Party hinting just days after its initial proposal that it may seek to modify the bill.

The government was particularly surprised at the outrage among women's groups and is expected to further relax the restrictions on abortions.

That, in turn, will only cause deeper opposition among the conservatives who insist their opinions and beliefs are being overlooked.