South Asian migrants accuse Croatian police of brutal beatings at border | Asia | An in-depth look at news from across the continent | DW | 26.10.2020

South Asian migrants stuck in Bosnian camps have accused Croatian police of badly beating people caught trying cross the border into the EU. Human rights groups are calling for an investigation of the abuse allegations. 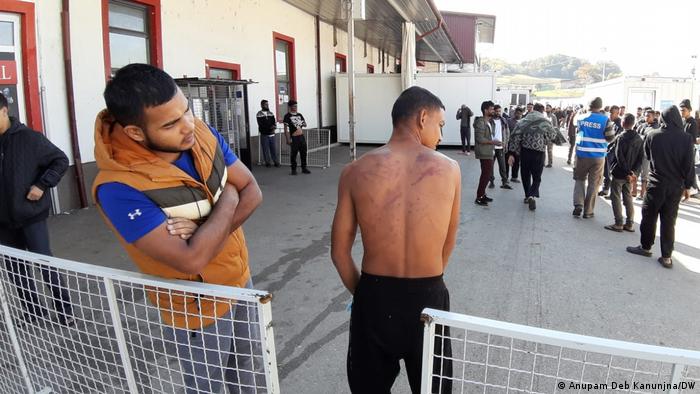 Solaiman is a 20-year-old Bangladeshi migrant and one of nearly 600 South Asian asylum-seekers who are camped out in a hilly forest in the western Bosnian town of Velika Kladusa, just a few kilometers away from the border with Croatia.

They are spending nights in crowded shacks made from tarps, and they lack sufficient food, water and medical supplies. But more than cold or hunger, they fear what may happen when they attempt to cross the European Union border into Croatia.

"Croatian police split us into groups of five people after we crossed the border. They forced us to lie down and beat us mercilessly before forcing us back to Bosnia," Solaiman told DW just an hour after an alleged incident that took place on October 19.

He was bleeding from an injury on the right side of his forehead, his lip was split, and there were bruises all over his body.

Read more: South Asian media: "We need to talk more with refugees and not just report about them"

"There were 21 Bangladeshis and seven Afghan refugees in the group. They beat all of us, and some had their hands and legs broken by the torture," Solaiman said. 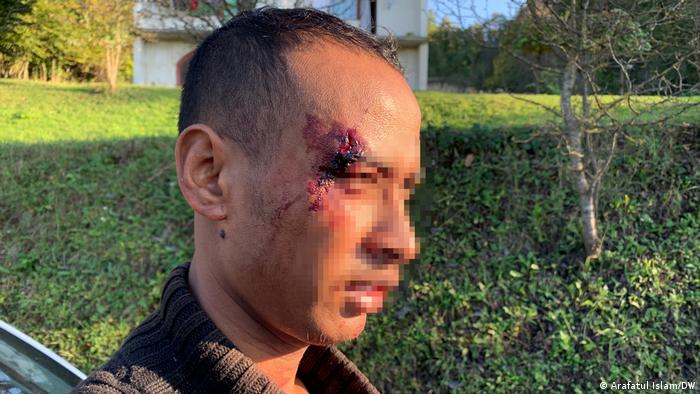 Solaiman claimed the police officers who tortured them were wearing black uniforms and ski masks. Other migrants and refugees living at the camp told DW that the Croatian police in black uniforms are notorious for brutality. The migrants accuse the police of beating and robbing people who try to cross the border illegally.

"They take our bags, mobile phones, money and even our clothes. After that, they beat us and force us back in our underwear," Mohammad Yasin, another Bangladeshi asylum-seeker, told DW.

Bosnia has become a bottleneck for thousands of Europe-bound migrants after other nations closed their borders and disrupted migration paths through the Balkans.

Upon entering Bosnia, most migrants walk northwest to the country's highly porous 1,000-kilometer (620-mile) border with Croatia, one of the last gateways to northern Europe.

Border town Velika Kladusa is a migrant hotspot where around 1,500 people, most of them from Pakistan, Bangladesh and Afghanistan, have been staying, their future uncertain.

At the nearby Miral camp, run by the International Organization for Migration (IOM), hospital beds are provided only to severely injured migrants; others are provided with pain medicine. The camp also houses refugees who cannot live without support. 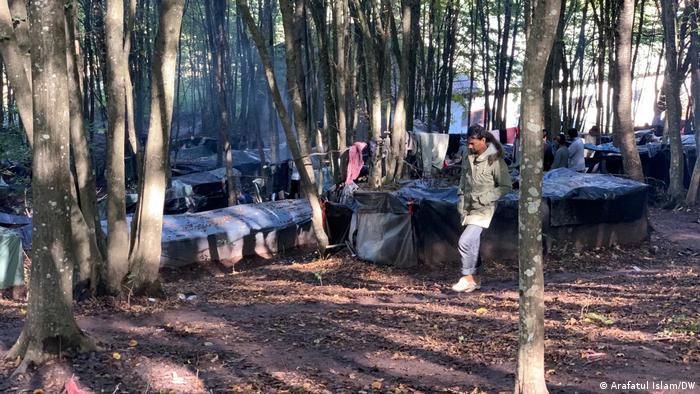 Hundreds of people camp in the woods near the Croatian border

There are about 700 migrants living at the overcrowded Miral camp. Half of them are from Pakistan, around 30% from Bangladesh, and the others from Afghanistan, Morocco and Tunisia.

The rest of the migrants live without medical aid in the forest camp, or in an abandoned factory.

"Croatian police broke both my legs by beating me mercilessly. It happened last night when I was trying to cross the Bosnia-Croatia border," Muhammad Waqas, a 27-year-old refugee from Pakistan, told DW at the Miral camp. He had been rescued by Bosnian police and taken for treatment to Miral.

"They intentionally aim for bones and faces using black batons. They don't listen, or ask anything, before starting to beat us," he said.

Mite Cilkovski, the manager of the Miral camp, said it often receives injured migrants who were beaten at the border, many of whom will take months to heal.

"They say that the injuries were caused by the Croatian police. We report the issue to relevant institutions and organizations whenever we receive such injured people," Cilkovski told DW.

Last week, the Danish Refugee Council (DRC) recorded more than 75 incidents of violence at the Bosnia-Croatia border near Velika Kladusa. The humanitarian NGO said it has teams in the area to verify reports. Most of the victims come from Bangladesh and Pakistan. 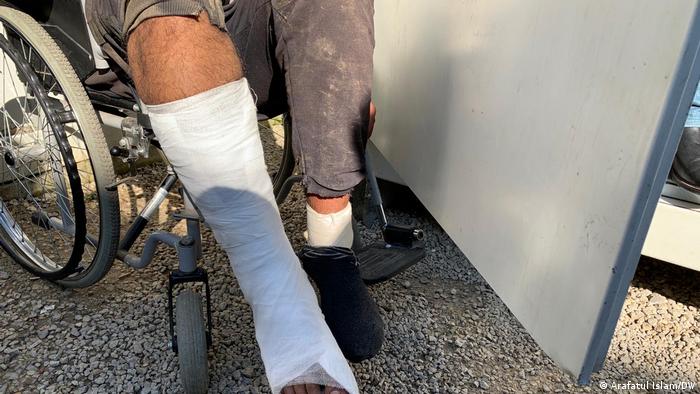 This man said his leg was broken during a beating

"The testimonies that the DRC has collected from victims of pushbacks are horrifying," DRC Secretary General Charlotte Slente told DW.

"People from different groups and nationalities have independently reported inhumane treatment, savage beatings and even sexual abuse at the border," she said, emphasizing this has been taking place for months.

She said authorities needed to intervene. "There is an urgent need to ensure that independent border-monitoring mechanisms are in place to prevent these abuses and to ensure that all reports of abuse are transparently and credibly investigated — and those responsible are held to account," she said.

Human Rights Watch (HRW) has repeatedly asked the European Commission to take action against member states like Croatia, accusing them of allowing unlawful abuse during violent pushbacks at EU borders.

"HRW has documented violent pushbacks from Croatia to Bosnia and Serbia for several years. These abuses have been going on unabated and are a frequent occurrence — not isolated events but rather a part of systemic practice by Croatian border officials," Lydia Gall, a senior researcher on the western Balkans at HRW, told DW.

"EU law prohibits summary returns of migrants and any violence during such unlawful returns on all its external borders," she added.

HRW's Gall said there should be enough evidence of beatings to legally prove abusive asylum practices.

"The European Court of Human Rights has ruled on asylum and pushback-related cases in the past," she said, adding that a lawsuit would be possible if lawyers could provide enough evidence of abuse.

Ylva Johansson, EU Commissioner for Home Affairs, has said that she is aware of the reports of police brutality at the Bosnia-Croatia border and was taking the matter very seriously.

"I am planning a thorough discussion with the Croatian authorities on these and other reports of fundamental rights violations," she said on Twitter, adding she plans to discuss Croatia's border-monitoring mechanism.

"Croatian authorities have committed to investigate reports of mistreatment at their external borders, monitor this situation closely and keep the Commission informed on progress made," Johansson said.

However, HRW's Gall said that EU should open infringement proceedings (legal action) against Croatia over its "blatant abuses of EU law " to put pressure on Croatian authorities to "effectively investigate abuses on its border, including holding responsible officers to account." 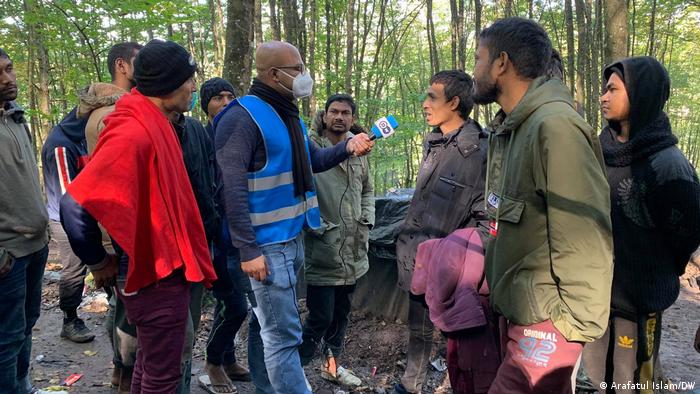 Croatia says it will investigate

Croatia's Interior Ministry told DW it is investigating the abuse allegations and has not independently verified whether they occurred.

''Immediately after receiving these allegations, this ministry initiated relevant procedures to verify them," the ministry said in a statement.

"It is our objective, and in our interest, to not only remove any suspicion of actions taken by Croatian police officers, but also to sanction and eliminate irregularities if, by chance, any have occurred."

''Taking into consideration the severity of those accusations, we find it inappropriate to provide any response to those accusations until they have been thoroughly verified,'' the ministry said.

Many refugees fear that their situation could get worse as winter is approaching. Cilkovski, the manager of the Miral Camp, said there is not much more his organization can do.

"We can't accommodate more than 700 people in the Miral Camp. Another camp is needed to accommodate others who are in the forest and surrounding areas now," he said.

"But it's not happening. If someone wants to return to their own country, IOM will arrange their flight free of cost."

DW Akademie's projects: Media about, for, and from refugees

Refugees in Bosnia: Waiting for winter at the EU gates