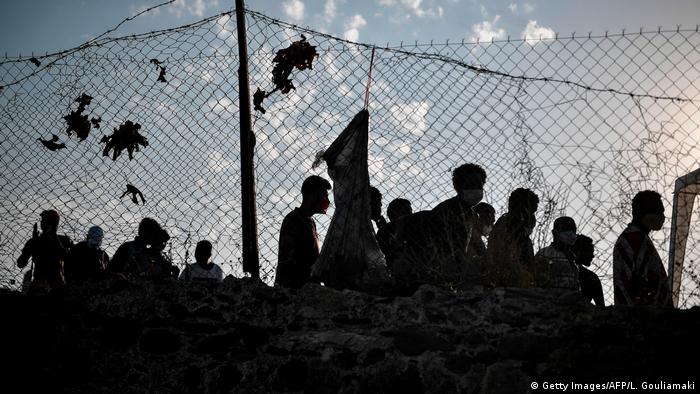 European Commission Vice President Margaritis Schinas likes to compare the EU's proposed pact on migration and asylum to a house with three floors.

The first floor consists of agreements to "keep people, for a better life, in their countries." The second floor contains the EU border and coast guard agency, well equipped to close off the EU's borders as much as possible. And the third floor is focused on what Schinas describes as a "system of permanent, effective solidarity," which would allow those asylum-seekers that nevertheless make it through to Europe to be distributed among the member states — either to be taken in by willing nations or for eventual deportation.

But this delicately constructed new European asylum policy has once again been demolished with a crash by Hungarian Prime Minister Viktor Orban, along with his Visegrad colleagues from Poland, the Czech Republic and Slovakia. Orban wants nothing to do with the third floor and its redistribution of asylum-seekers within the EU, "return sponsorships" and "mandatory solidarity." Sebastian Kurz, the anti-migration chancellor of neighboring Austria, also believes the word "solidarity" is wrong where asylum-seekers are concerned.

In a matter of days, the Commission's proposed migration pact, long in the making, is already not worth the paper it's printed on. Schinas' migration blueprints have been met with near-universal criticism. Lukewarm support has only come from Berlin, Rome and Paris, along with remarks that the proposal was a basis for negotiation and a step in the right direction. But that direction remains undefined.

Read more: From Bangladesh to Germany: How political refugee built a new life in Düren

Bernd Riegert is a DW correspondent in Brussels

What's clear, however, is that this proposal will not achieve anything — a view that is shared by many migration experts. The Commission's plan is unrealistic, because the intransigent anti-immigration forces in Eastern and Central Europe were always going to shoot it down in flames.

Orban, Kurz and the rest want to completely seal off the borders to "irregular" migrants, and have called for all asylum-seekers to be sent across the EU's external frontier. That would mean an end to any right to asylum, a fundamental right which the EU has until now guaranteed and to which it has committed on the international stage.

And now? We'll likely, once again, see years of negotiations about the many individual details of the migration pact, only for all parties to admit in the end that no agreement can be reached. Faster asylum procedures and deportations of rejected asylum-seekers are already possible, as they're already part of existing EU law. Why EU member states don't make use of these laws, instead of keeping people detained on Greek islands or letting them drift in the Mediterranean somewhere between Libya and Italy, remains a mystery.

This seeming reluctance to act must be part of some deceptive deterrence strategy. The EU seems to want to prove that conditions in the bloc are worse than in Turkey, Libya or Syria, so that asylum-seekers don't decide to make the journey in the first place.

Even Ylva Johansson, the EU commissioner for home affairs responsible for migration, has begun speaking of deterrence as the goal of the migration pact. Two-thirds of asylum-seekers have seen their applications rejected and thus have to be sent back home, she has pointed out. That may sound good — but the problem is that many countries of origin refuse to take back their citizens. Sometimes it's even impossible to determine where people came from in the first place, and people can end up going underground to avoid the authorities. The number of people who actually end up being deported is unbelievably low. There doesn't appear to be any room in Schinas' plan to deal with these problems. Maybe his house is missing a floor?

And how will this help the people on Lesbos — the migrants, the aid workers, the authorities and the residents of the Greek islands? It won't. New, terrible migrant camps like Moria could be set up to replace the destroyed facility. Many more Morias will be necessary if all examination and asylum procedures end up taking place directly at the border, as proposed in the new migration pact. People will have to be detained there, especially if they are to be returned directly to their countries of origin. New closed camps would also have to be set up in Spain and Italy.

The builders of Europe's new migration house did offer one bit of supposed comfort: With just 140,000 irregular migrants arriving in the EU each year, the European Commission said the bloc was far from a crisis, and that it wouldn't do to overdramatize the situation. They should give that advice to Viktor Orban. To the people living in shelters on the Greek islands, it just sounds like cynical mockery.

This commentary has been translated from German by Timothy Jones

Opinion: No far-right publishers at the Frankfurt Book Fair, please! 22h ago