Saudi blogger Raif Badawi could receive 50 lashes in public on Friday for insulting Islam. People around the world have taken up his cause, protesting on the streets or on social networks. 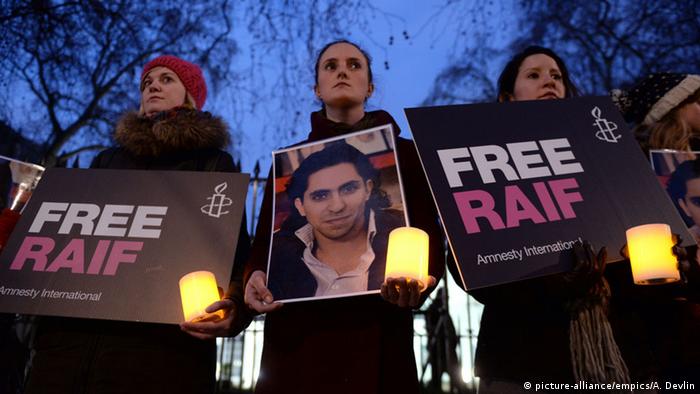 1,000 lashes with a stick sounds like a form of punishment from the Middle Ages - but it is in fact the punishment that awaits Saudi blogger Raif Badawi in Saudi Arabia.

He was flogged 50 times on Jan. 9, in public after Friday prayers in front of the Al Jafali mosque in Jiddah. His second scheduled beating was postponed twice, but he is now set to receive the lashes on Friday, January 30.

Badawi was arrested in 2012 for allegedly insulting Islam in his Free Saudi Liberals blog. Also charged with having ridiculed Muslim dignitaries and overstepping "the boundaries of obedience", he was sentenced to ten years in prison, a 200 000 euro ($225,938) fine and 1,000 lashes - 50 every Friday for 20 weeks. Physicians say that is tantamount to an execution by installments.

Tens of thousands of supporters in the Internet

People all over the world are shocked at the cruel sentence.

Lawmakers in Germany's Bundestag unanimously demanded the immediate pardon and release of the Internet activist.

On Facebook, activists have organized protests at Arab embassies and consulates in their native countries. The Facebook group "Free Raif Badawi", which has more than 10,700 followers, has called for protest marches and campaigns in Germany, Belgium, Switzerland, Austria, Canada, Britain, Ireland and the US.

A small group of demonstrators gathered at the Saudi embassy in Brussels on Thursday, demanding the blogger's immediate and unconditional release:

Users can share pictures of their protest ,or their horror at the Saudi regime's methods, under the hashtag #FreeRaif. Badawi's own twitter account is continued by his wife Ensaf Haidar and has almsot 39,000 followers.

In 2012, Haidar and the couple's three children fled to Canada, where she has been working for her husband's release ever since, among others side by side with Amnesty International (AI). "Raif told me he is in a lot of pain after his flogging, his health is poor and I'm certain he will not be able to cope with another round of lashes," Haidar said after her husband had received the first beatings.

AI Kanada has gathered almost 76,000 signatures on a petition to save Raif Badawi eine Petition.

The human rights organization appeals to the Saudi government to drop all charges against Badawi. He should be set free immediately and protected from further lashings and other torture.

Worldwide, many more people are campaigning for the blogger's release, AI says:

An online petition by Reporters Without Borders addresses Saudi King Salman directly, and has been signed by more than 42,600 people.

In India, a cartoonist expresses indignation in his own way:

Amnesty International Germany is also campaigning for Raif Badawi's release, and joined a protest against the verdict and the violation of human rights in front of the Said embassy in the capital Berlin.

"The lashings amount to torture," Ruth Jüttner, a Middle East expert from Amnesty International in Germany, told DW after the second beating was postponed. "We demand that the punishment be stopped and that Raif Badawi be released from prison."

The news of the massive support has also reached Badawi's Saudi prison. Mireille Elchacar from AI Canada told the Quebec daily newspaper La Tribune how important social media intervention has become for the blogger's morals: "In spite of everything, he is aware of what is going on and that allows him to have hope."

The US president has visited Saudi Arabia, where he offered his condolences for the late king. Obama also held his first formal talks with the newly enthroned King Salman. (27.01.2015)

The planned public flogging of Saudi blogger Raif Badawi has been postponed for a second time, says Amnesty international. Riyadh may be trying to quietly drop the punishment that has drawn strong international rebukes. (22.01.2015)

Amid growing criticism, Bayern Munich have stood by their decision to participate in a friendly match in Saudi Arabia, despite the international outcry over the country's human rights record. (21.01.2015)