Social inequality in Germany is on the rise | Germany | News and in-depth reporting from Berlin and beyond | DW | 12.05.2021 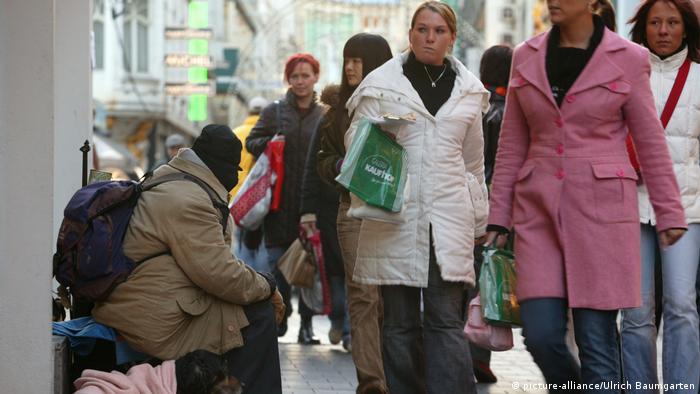 More and more people in Germany have precariously low incomes

Djamila Kordus is a brave woman. The trained retail saleswoman ventured onto television on the ARD talk show "Hart aber fair" on May 10, for the segment titled, "Poor despite work — is social advancement an empty promise?"

Kordus is a single mother and money is always tight. Although she has a full-time job at a large online retailer as a warehouse clerk, she says she is left with around €500 ($610) to live on per month after deducting all her fixed costs.

Being poor despite work is becoming an increasingly common reality in Germany. That much is confirmed by the German Labor Ministry's latest poverty and wealth report, which Chancellor Angela Merkel's Cabinet approved on Wednesday. Its results will be debated in the Bundestag in June.

The government compiles the 500-page report every four years, and it is supposed to give an overview of the social situation in Germany. At the moment, this looks rather bleak: The gap between rich and poor in Germany is widening, a situation that has been aggravated by the coronavirus pandemic. For opposition parties, trade unions, and social associations, this is an alarm signal.

For Joachim Rock, researcher and labor department head at the Paritätische Wohlfahrtsverband, one of Germany's largest associations of charity organizations, "the report shows that the crisis has hit the poorest the hardest."

Rock told DW that during the coronavirus crisis more than ever, people with low incomes would have had a high risk of "losing their jobs and income." Rich people, he says, would have struggled significantly less.

But what does being poor mean in Germany? Are people only poor if they don't have a roof over their heads, collect deposit bottles to make ends meet, or live on state support? Or could it also include the people who have a full-time job but cannot live on their wages?

In Germany, this is precisely defined. A person is categorized as poor if they live on less than 60% of the median net wage, which is currently €1,176 ($1,429) a month. The rich are those who receive a monthly net salary of more than €3,900. However, this would also include the super-rich, such as the owner of the Lidl supermarket chain, Dieter Schwarz, whose private wealth is estimated at over €20 billion.

The proportion of rich people in Germany has continued to rise in recent years, the latest poverty and wealth report shows, as has the proportion of poor people. Meanwhile, the middle-income bracket continues to shrink. 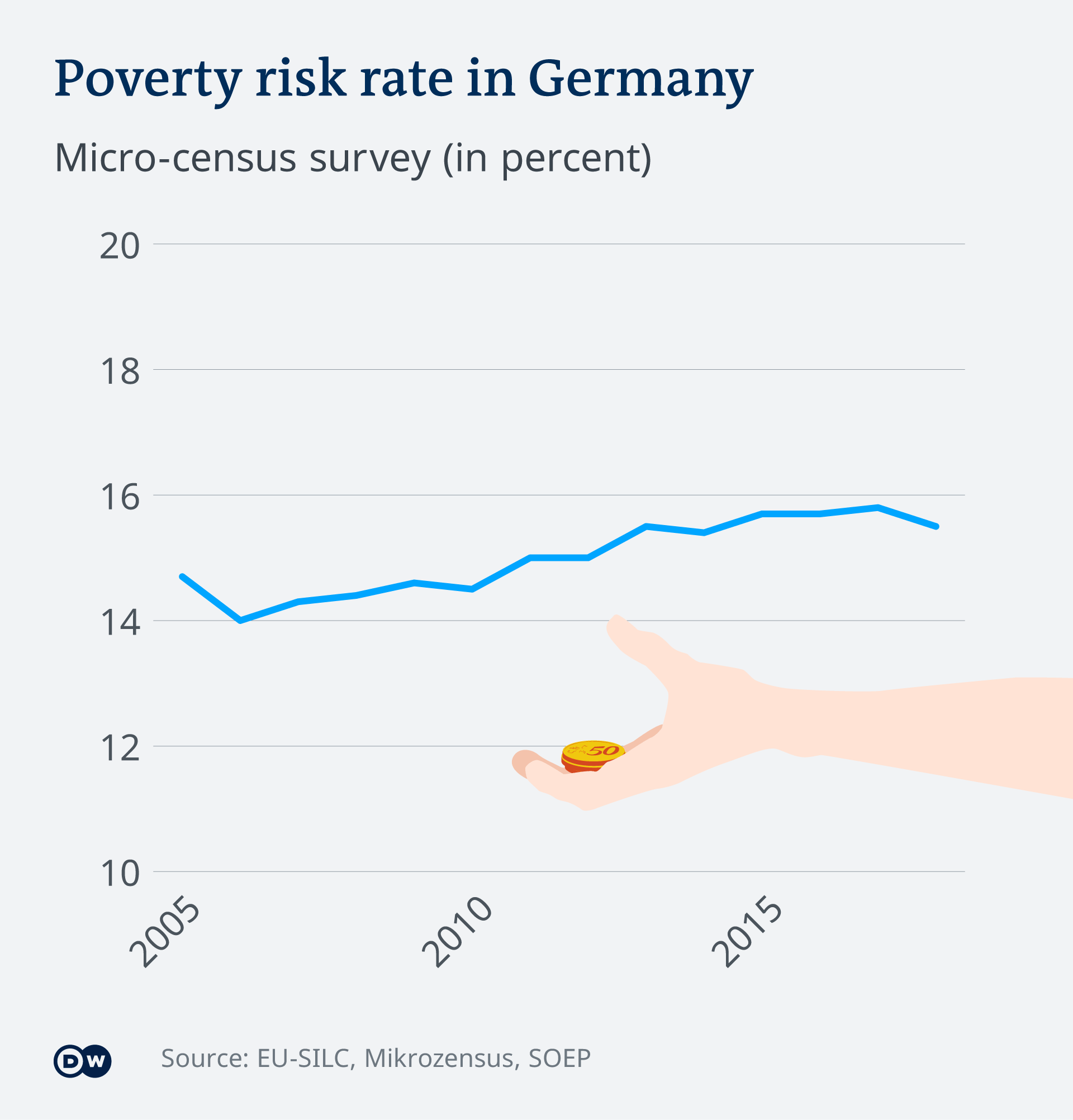 This situation has been exacerbated by the coronavirus. In a survey for the report, about a quarter of households said their incomes had shrunk during the pandemic, with low- and medium-income earners hardest hit. Many of the respondents with particularly low incomes had struggled to meet current expenses since the pandemic began. The income risks associated with the pandemic were "greater in the lower income brackets," the report continued, in part because these people had "little in the way of reserves or other financial flexibility."

Rock, of the Paritätische Wohlfahrtsverband, has long noted that incomes in Germany develop very differently: "While people with low incomes often suffered real income losses, higher incomes grew much more strongly. Wealth is distributed very unevenly: The richest half of the population has 99.5% of the assets." Around 3.8% of the population has very high net wealth, which means they own more than half a million euros, usually in real estate, financial investments, or business assets. 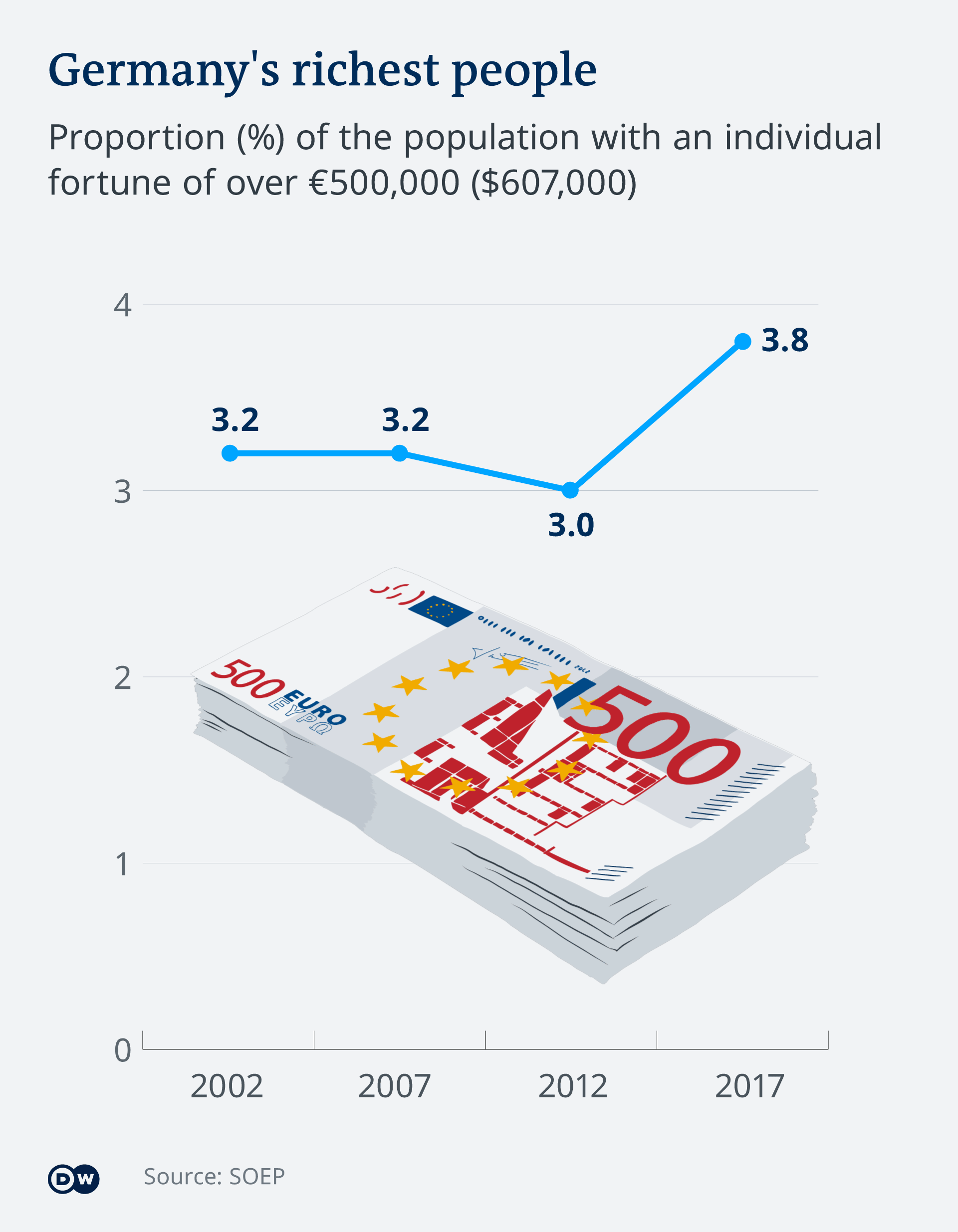 The report has sparked much government criticism from Germany's political opposition. Green Party leader Katrin Göring-Eckardt said the growing gap between rich and poor and the experience of more and more people being left hanging in the crisis is poison for social cohesion.

Katja Kipping, the social policy spokeswoman of the socialist Left Party, told DW, "The neoliberal promise of upward mobility is revealing itself to be an empty promise, at least for poorer classes."

Rock gives Chancellor Angela Merkel rather poor grades for her time in government. "Inequality in Germany has grown significantly over the past 16 years," he said. "The social reforms that came into force in 2005 have contributed significantly to this: in 1995, only 15% of the unemployed lived in poverty; in 2005, it was already over 35%, and in 2015, almost two-thirds."

There are political consequences to this. Historical trends show that the lower the income, the lower the political engagement and the willingness to vote. The current government will not be able to change the situation much in the few months before the election, but it is already clear that the issue of social justice will play a major role in the upcoming campaign. Will there be a new wealth tax? Does the minimum wage have to rise?

From rags to riches — very unrealistic

And another finding has emerged from the government analysis: The promise of social advancement remains mostly unfulfilled for poorer people and their children. According to the report, people in the low-wage sector and their children have very little chance of advancement.

For people like Djamila Kordus, the single mother from Berlin, the government report must seem pretty sobering. But one thing is out of the question for her: Drawing government aid instead of going to work. "I grew up thinking that work is the most important thing," she said on the TV show. She also wants to be a role model for her daughter. "If I just sit at home, what are the kids going to do later?"

While you're here: Every Tuesday DW editors round-up for you what is happening in German politics and society, with an eye toward understanding this year’s elections and beyond. Sign up here for the weekly e-mail newsletter "Berlin Briefing," to stay on top of developments as Germany enters the post-Merkel era.