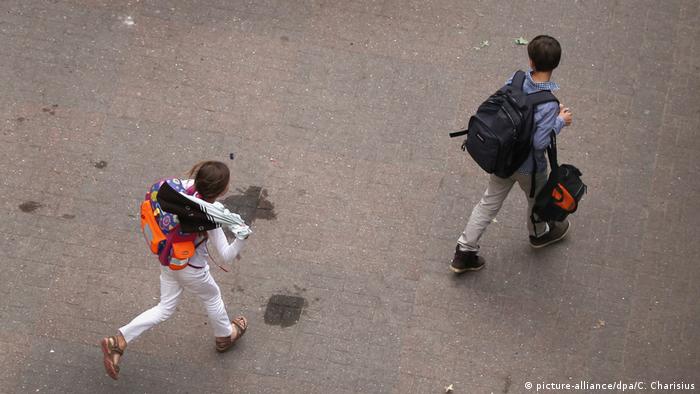 Some 2.8 million children in Germany — or one in five — are growing up in poverty, a report from the Bertelsmann Foundation published Wednesday showed.

The study found that there had been few improvements in recent years, and that the coronavirus crisis will likely make the situation worse.

"For years, the fight against child poverty has been one of the greatest social challenges in Germany," the report said.

Even so, since 2014 the child poverty rate in Germany has registered very few improvements.

According to the report, 21.3% of all people under the age of 18 in Germany are growing up in poverty.

The country's persistently high rate of high child poverty shows that the area is a "significant, unfinished construction site" for Germany, the report said.

World in Progress: New challenges for German schools in the pandemic

The study considered several factors in its analysis of childhood poverty. In addition to looking at families that receive Germany's Hartz IV welfare benefits, researchers also considered children from families whose income is less than 60% of the average of all households, considered to be at-risk of poverty.

Around two-thirds of children living in poverty in Germany experience it longterm, the report said. Concrete effects of poverty in Germany include not owning a car or having electronic devices in the house, and doing without vacations and activities like going to the movie theater.

"Child poverty remains an unsolved structural problem with considerable consequences for the growing up, well-being, education and future prospects of children," the foundation stressed.

The coronavirus crisis threatens to further exacerbate the problems of child poverty, the report said.

Parents of disadvantaged children often work part-time jobs and have consequently been disproportionately affected by job and income loss during the pandemic. There is a risk that many children who live in poverty will "fall through the cracks," warned Jörg Dräger, chairman of the Bertelsmann Foundation.

Dräger said this could be partially explained by the fact that many state and social services were shut down at least temporarily during the crisis.

The homeschooling required by the coronavirus lockdowns also disproportionately affects poorer children, the report said. These children often do not have the necessary technical equipment or space to engage in learning.

For example, 24% of children in households receiving basic income support have no access to a computer with internet, the report said.

Dräger said lawmakers weren't doing enough to tackle child poverty, and called on the state and federal governments to take greater action: "The prevention of child poverty must become a political priority, especially in the corona crisis," he said.

A comparison of the world's most developed countries has found that rising employment is masking an increased risk of living below the poverty line. In Germany, the contrast is particularly stark between generations. (05.12.2019)

Germany could have 3.2 million pensioners at risk from poverty, according to data disclosed by an investigative television program. Monitor says the unpublished figures come from the federal statistics office. (09.01.2020)

UN: Millions of children missing out on routine vaccinations 15.07.2021

Some 23 million children did not receive essential vaccines last year, as health services struggled worldwide with COVID-19. It marks the highest number in over a decade, according to UN data.

A WHO official has warned that the omicron variant may lead rich countries to once again hoard vaccines. Meanwhile, Slovakia is offering cash to people over 60 if they get vaccinated. DW has the latest.