A food bank that provides groceries to about 6,000 people decided to stop issuing membership cards to foreigners. Now it's at the center of a heated national debate, and even Chancellor Merkel has an opinion. 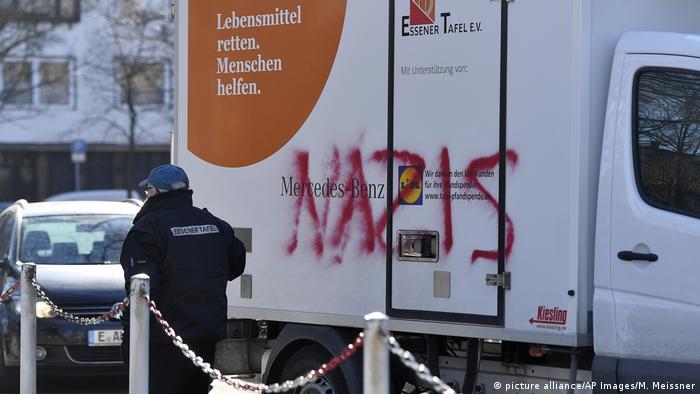 A small NGO in the western German city of Essen has become a flashpoint for the ongoing national debate over xenophobia, migration and poverty.  The controversy surrounding the local food bank, or "Tafel," has become so heated that even Chancellor Angela Merkel weighed in on Tuesday  —  slamming the decision some say is the result of her government's policies.

In December, the food bank, which gives leftover food from supermarkets and restaurants to about 6,000 needy people a week, decided to stop issuing new membership cards to people who weren't German citizens.

When local media caught wind of the move last week, it prompted a national outcry, with many of the organization's critics accusing it of focusing on country of origin instead of the level of need. A French single mother told DW that she had been turned away at the door. 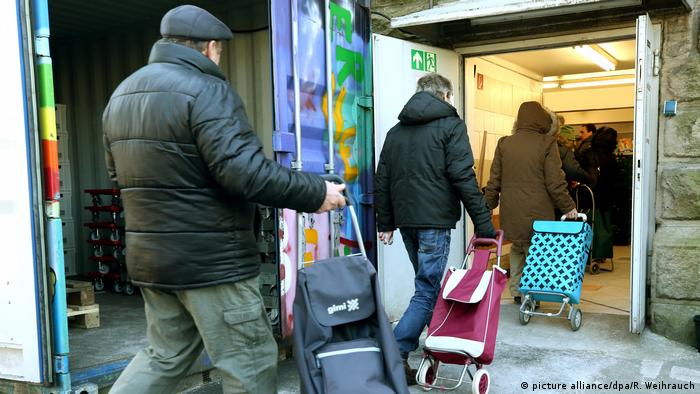 The Essen Tafel is one of 930 non-governmental food banks around Germany, around 75 percent of its members are foreigners

Manager Jörg Sartor said at a press conference last Thursday that he "didn't understand all the excitement." He said that his decision was based on reports of "pushing and shoving," that frightened off the elderly and stretched the food bank's resources. He stressed that the Tafel was not xenophobic, and that the restriction was only temporary.

Sartor hoped that would be that — but over the weekend, six of the food bank's delivery vans and one of its entrances were graffitied with the phrase "F***  Nazis." The manager dismissed the vandalism as "kid stuff," but said he was also worried it would make his volunteers too scared to come to their shifts.

Soon federal lawmakers began to offer their own views of the situation. Left Party leader Sahra Wagenknecht blamed the government for forcing small nonprofits to bear the costs of its poor planning during the refugee crisis.

In an interview with Deutschlandfunk radio, Wagenknecht asked why "in a country as rich as Germany are we arguing about who gets leftover groceries?" 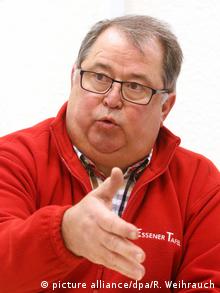 Sartor: "If anyone here starved just because the Tafel didn't exist anymore, something would be going very wrong in this country."

When Chancellor Merkel was asked about the food bank hubbub by broadcaster RTL on Tuesday, she said it "wasn't good" for the Tafel to hand out membership cards based on citizenship, but said that the situation highlighted "the pressure that [nonprofits] are facing."

But it is government policy that is responsible for this pressure, poverty expert Dr. Christoph Butterwege told DW.

"The main thing here is the successive cutbacks of the social welfare system," said Butterwegge. "We're seeing the results of that here."

When asked if it was possible to understand the food bank's decision without immediately being smeared as a "Nazi," Butterwege said "well, the whole thing does have hints of racism. Nationality cannot be a selection criterion for food aid."

However, Butterwegge added, making sure no one goes hungry in Germany is "actually the government's responsibility."

Butterwegge's point was bolstered by a new study published on Tuesday that said the unemployed in Germany were more at risk of sinking below the poverty line that any other EU country.

At a meeting of the food bank's leadership on Tuesday, they decided to keep the rule for now. However, they said that within the next two weeks they will hold a roundtable with lawmakers and community leaders in order to gather suggestions for other ways to handle the problems the Tafel is facing.

Poverty, homelessness on the rise despite German affluence

Slums like the favelas in Brazil don't exist in Germany. Poverty and homelessness are only visible at second glance, in part because social decline is less obvious. (18.12.2017)