Prime Minister Igor Matovic has pitched switching jobs to resolve the standoff over the ruling coalition's pandemic measures. However, some are calling for his removal entirely. 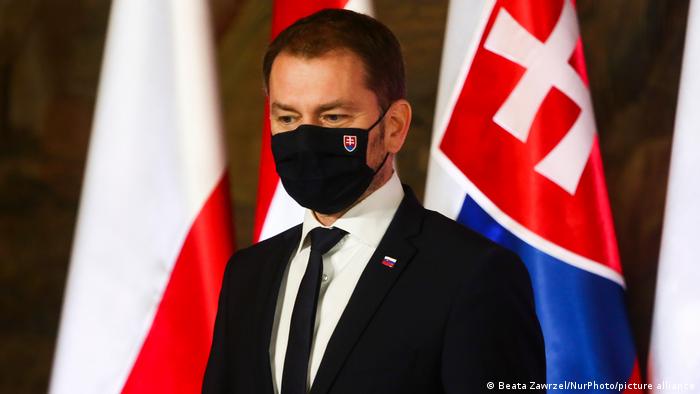 Matovic has come under increasing pressure to relinquish his position for his handling of the coronavirus pandemic.

"We will exchange our posts with minister of finance, Eduard Heger. ... He is a good man and all of us can trust him," Matovic told reporters.

Coalition in danger of crumbling

Six ministers, including the health minister, have already departed from the 16-member Cabinet, and one party has announced that it will no longer be a part of the four-party coalition unless Matovic quits the government entirely.

Matovic and Heger are from the coalition's strongest party, OLANO.

Slovakia has been hit hard by the pandemic, and the standoff began after Matovic ordered a shipment of 2 million Sputnik V doses without his coalition partners' knowledge.

He defended the purchase, saying it would speed up the country's vaccination program.

During the pandemic in Slovakia, a country of 5.4 million people, Matovic's critics have also accused him of poor communication and political missteps.

German Chancellor Angela Merkel's chief of staff, Helge Braun, warned that the country still finds itself "in the most dangerous phase of the pandemic."

The country's true COVID death toll stands above 321,000, almost 60% more than originally thought. The higher fatality rate rivals that of Brazil, one of the hardest-hit countries. Follow DW for the latest.