Sloth sanctuary nurtures animals back to health | Environment | All topics from climate change to conservation | DW | 17.04.2013

In Costa Rica, where mother sloths abandon their babies more often than in any other rainforest, a sanctuary takes care of wounded and abandoned sloths. About 130 animals have been released back into the wild. 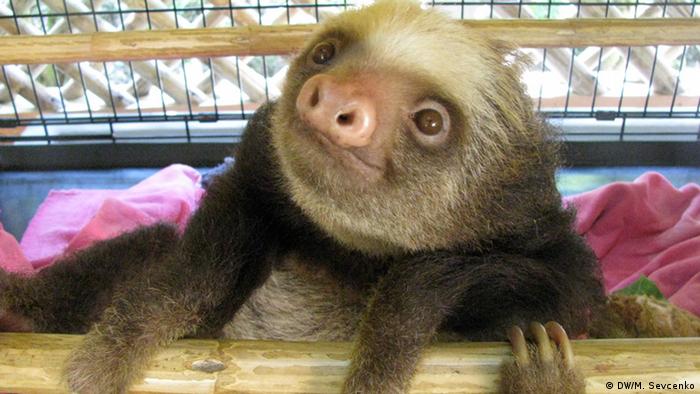 Claire Trimer, nursery supervisor at the Aviarios Sloth Sanctuary, weighs and feeds around half a dozen baby sloths every morning. Some sloths, like one-year-old Linus, need to be fed by hand. The docile baby sloth's deformed mouth may have been the reason for his mother abandoning him. At the sanctuary, Linus is a staff favorite.

Linus came to the sacntuary at a very young age, Trimer recalls. "His mouth was and still is deformed. We don't know if it's a birth defect, or if he was maybe sucking on his claws or heel in utero, but his mouth doesn't close all the way, which means he can't form suction." 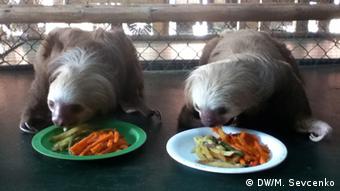 The nursery itself is an outdoor area where each animal is kept in its own spacious cage, equipped with blankets and stuffed toys. With 150 sloths currently residing at the sanctuary, the facility is the only of its kind in the world. Lush and tranquil, the sanctuary is sprawled over 120 hectares (300 acres) of protected land.

Most days, crowds of visitors explore the grounds and take photos, cooing over the adorable sloths.

But apart from producing a panorama of natural treasures, the rainforests of Costa Rica are also cultivating a mysterious phenomenon: mother sloths here abandon their babies more often than mother sloths in other rainforests, such as in Columbia. One theory suggests the abandonment could be related to genetic mutations, caused by pesticides.

Many babies are found on the Costa Rica rainforest floor - they are picked up by employees of the Ministry of Environment, Energy and Telecommunications who accidentally stumble upon them, sometimes only days old. Adult sloths, on the other hand, are brought in with serious wounds caused by deforestation, traffic and power lines, and even human brutality. 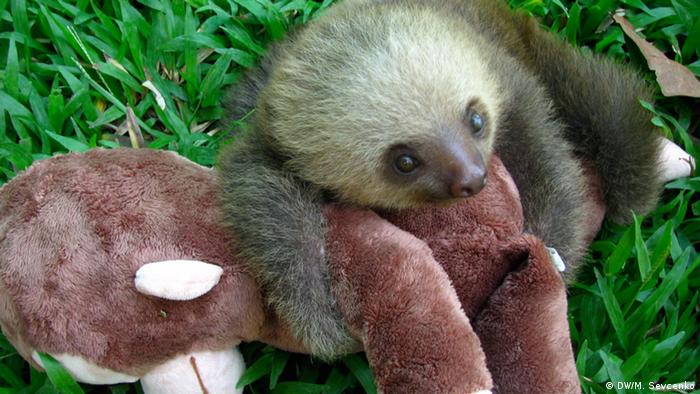 "In every language, the word sloth translates as lazy, and some people believe that a sloth is a deadly sin and therefore the animal is the devil's animal," says Becky Cliffe, a British PhD student who is spearheading a long-term research project on sloths in the wild: from what they eat and how they sleep to their behavioral patterns and population density.

"In Costa Rica that can be quite a problem because a lot of people abuse the animals. We've had some here that have been set on fire, or run over or beaten with sticks."

"I'm working with something called the Daily Diary," Cliffe explains, "which is a data logger that records everything the animal does, almost as though the animal was writing a diary. It stores it in something I've christened the 'sloth backpack.' It also has a tracker in there, so I can go and find the sloths. Essentially this allows us to see what the animal is doing and where it's doing it." 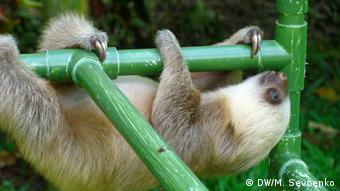 Cliffe is one of the few out there who is working to learn more about the mysterious animal.

"People thought that they were so slow and they weren't very interesting. They just sat in trees all day and they didn't really do much, so they went under the radar for a very long time," Cliffe says. "Now we're just starting to realize how different to every other mammal they actually are."

Some of those differences are that sloths don't store milk like other mammals - in fact there is no external signs of pregnancy, not even a baby bump. Sloths are also the slowest mammal on the planet, taking 30 days to digest just one leaf. And they only defecate once a week, climbing all the way down the tree to do so. This is an evolutionary conundrum, as it leaves sloths vulnerable to predators.

The sanctuary takes in both species indigenous to the area, the two-fingered Choloepus and the three-fingered Bradypus, which is famous for its perma-smile. The three-fingered are the more visible of the two, as they tend to move during the day, whereas the two-fingered sloths are nocturnal and stay conceal during the day. "They are very different animals, they should not have been called by the same name," Trimer says.

"In the wild, a two-fingered sloth is going to keep her baby up to a year," Trimer explains. "During that time she's teaching the baby a lot of survival skills. They do not instinctively know what foliage in the jungle is toxic. Mothers are also going to encourage their babies to move slowly, because quick movement draws the attention to predators." 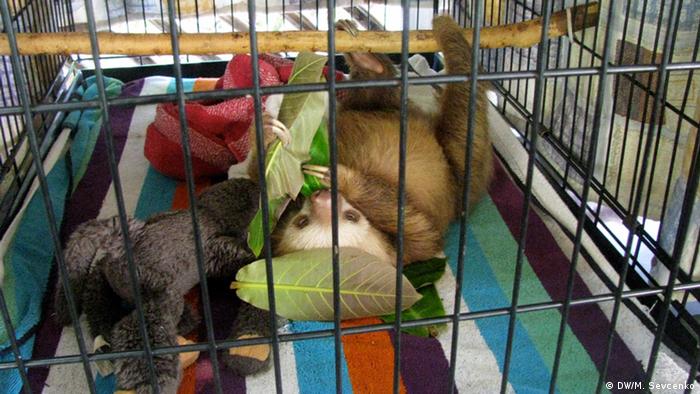 It takes a month for sloths to digest just one single leaf - but for baby sloths, leaves work as a toy too

The problem occurs, however, if a baby arrives at the sanctuary without having had significant time with its mother. Since it lacks the necessary survival skills, it will remain in captivity for a lifetime. The sanctuary releases all the adults unless they are permanently injured in a way that would effect survival.

Ubu resides in the adult sloth clinic - an outdoor enclosure comprised of rows of cages. Only a couple of years old, Ubu came to the sanctuary paralyzed from the waist down and will remain in captivity.

"In the hopes that maybe he could regenerate some movement we started doing impromptu physical therapy," says Trimer. "The interesting thing is, just using his arms he can swing across the cage faster than a fully functional sloth."

The Aviarios Sloth Sanctuary is primarily a family-run operation that is funded through proceeds from daily tours and over-night stays at the Sloth Hotel as well as donations.

In the early 1990s, native Alaskan Judy Arroyo and her late Costa Rican husband Luis opened a hotel on their property, in the wake of a deadly earthquake which had destroyed their bird-watching tourism business. 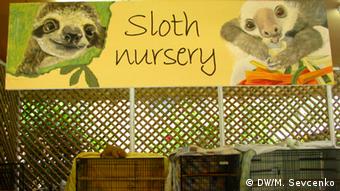 About 150 sloths currently reside at the sanctuary

But when three local girls brought an abandoned baby Bradypus sloth to their door, Judy and Luis' lives would never be the same. Twenty-one years later, sloth Buttercup has become a cherished mascot of the sanctuary.

Through careful observation and common sense, the Arroyos broke ground in sloth research and were able to determine factors such as the diet, habitat and behavior of the sensitive and solitary sloth. For example, examining Buttercup's black teeth helped Judy deduce that she was eating the leaves of the Cecropia tree, as the tannin forms a darkish residue.

Arroyo has received some criticism, however, from a few staunch animal rights activists who say it's better to let sloths perish in nature than keep them caged for rehabilitation.

"A baby that's raised in captivity doesn't belong in the wild," Arroyo says. "For one thing, it's clean of all its defenses, and it's probably a different genetic group that's out there."

As for the injured and rehabilitated older sloths, the sanctuary is working to reintroduce them back into nature. So far they have released 130 sloths into the wild. Another goal is to find homes in suitable zoos for those sloths that must remain in captivity. But with barriers of red tape imposed by the Costa Rican government, that task is an increasing challenge leaving the sanctuary with almost too many sloths to handle.

Creating sustainable communities in the Amazon

The small municipality of Ilha das Cinzas in Brazil has shown that sustainable cultivation can benefit locals and protect nature. The community has only recently gained ownership over the land they now work to preserve. (12.06.2012)

Costa Rica is considered a global pioneer in environmental conservation. But even so, many species including the country's large parrots, are endangered. One environmental group is fighting for their survival. (10.05.2011)

While zoos are being recognized as key centers for conservation, the impact of climate change has brought some experts to the conclusion that more radical solutions are needed to save vulnerable species. (30.04.2011)