Slight optimism after Putin visit to Berlin | Germany | News and in-depth reporting from Berlin and beyond | DW | 20.10.2016

"Better this than nothing" was the reaction after Vladimir Putin's first visit to Germany since the Ukraine crisis. But it's unclear whether the meeting will yield any concrete results on either that conflict or Syria.

"The efforts toward a peaceful solution of the Ukraine conflict have been given an important new impulse," Franz Josef Jung - the deputy parliamentary chairman of the conservative CDU - told Deutsche Welle. "It's important now that the foreign ministers of the four nations agree in November on a concrete timetable for implementing the Minsk II peace accords. Most of agreements reached thus far have not been implemented because the parties in the conflict - the Ukrainian separatists and Russia - have lacked the will to do so."

"I hope very much that the German government becomes convinced that dialogue is better than threats of fresh sanctions," Left Party chairwoman Sahra Wagenknecht said in a statement. "Even if the concrete results of this summit are modest, the talks could be the beginning of a different relationship with one another."

In early-morning interviews with German television and radio, the government's Russia commissioner, Gernot Erler of the Social Democrats, said that the "more had come out" of the meeting than expected and that "very important" progress had been made toward implementing the Minsk II peace accords aimed at ending the conflict between Russia and Ukraine.

On Wednesday evening, the four leaders agreed to draft a roadmap on how to realize ceasefire arrangements in Eastern Ukraine - essentially an agreement to reach an agreement.

In a midnight press conference after the meeting, Merkel said that the participants had drawn up "an initial document" but that there were still "many disagreements."

"We've proclaimed our determination to draw up a roadmap," Merkel said. "But as things stand, there's a lot of hard work to come."

The role of the OSCE

Merkel and Hollande did not confirm reports that they had agreed to an armed mission by the Organization for Security and Cooperation in Europe (OSCE) to keep peace in eastern Ukraine. However, the CDU did state on Thursday that the role of the OSCE had been discussed.

"The realization of the agreement reached yesterday that OSCE observers will be allowed to visit the Ukrainian-Russian border could help build trust and boost stability," Jung said. "We'd be able to monitor whether Russia was fulfilling its promise not to bring weapons across the Russian border into separatist territory."

The Greens welcomed the prospect of a greater role for the OSCE.

"The agreement yesterday for a timeplan for the implementation of Minsk II and the OSCE police contingent is a step in the right direction," Marieluise Beck - Green spokeswoman for Eastern European policy - told Deutsche Welle. "Now we have to see that the trust, which has been damaged by the Kremlin, is restored step by step."

Hollande and Merkel said they had also raised the topic of Russia's support for the Syrian government and the continuing aerial attacks on civilians in the city of Aleppo. They refused to rule out further EU sanctions against Russia. But they said a meeting of the European Council on Thursday would focus on humanitarian aid in Syria, and not on punitive measures aimed at Moscow.

In his press conference after the Berlin meeting, Putin said he would support the extension of a unilateral government ceasefire in Syria. 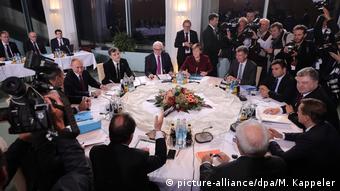 In the German media most commentators were skeptical as to whether any action would follow the words in Berlin.

The online version of Die Zeit newspaper proposed that the meeting might be useful for preventing an existing conflict from getting worse.

"The point of such conversations in this format is less to achieve anything in the long term, to say nothing of peace between Moscow and Kyiv," the paper wrote. "The main thing is to cool off the hot war that threatened to end in a dangerous defeat for Ukraine in 2015."

Some newspapers focused on the fact that Putin was accompanied by an advisor who is officially banned from entering the EU but who received an exemption for the meeting. Most commentators read this as a gesture by Putin regarding EU sanctions against Russia.

"Putin made it clear what he thinks of sanctions with a provocative gesture," Die Welt newspaper wrote. "He took Vladislav Surkov along with him to Berlin, the man who is denied entry into the European Union as part of the 2014 sanctions imposed because of the Ukraine crisis."

But the Wednesday meeting can also be seen as a slight softening of Russia's hardline stances on Syria and Ukraine. It was the first time that Putin has visited Germany, since Russia annexed the Crimea from Ukraine in 2014.

Opinion: A roadmap of made of paper

Against all the odds, the Berlin Ukraine summit has yielded a result. However, Russia’s president will have little interest in following up with action, says DW’s Christian F. Trippe. (20.10.2016)

A Russian general has said that Thursday's ceasefire to allow aid into Syria's Aleppo will run for 11 hours, not the eight initially planned. Moscow and Damascus say that their air forces have already halted operations. (19.10.2016)