Ski season is on again in Germany and Austria, with restrictions | Culture | Arts, music and lifestyle reporting from Germany | DW | 12.11.2021

Ski season is on again in Germany and Austria, with restrictions 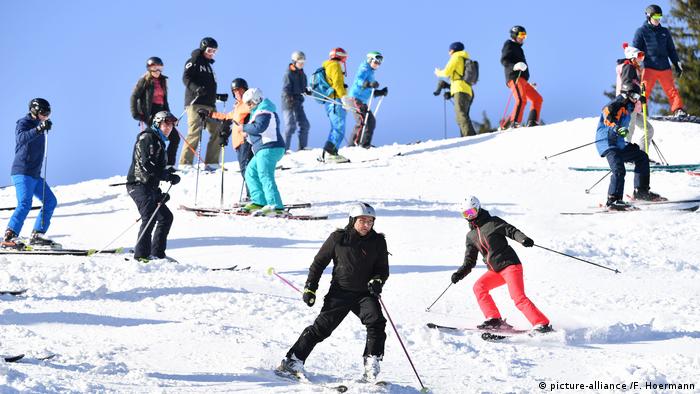 In the run up to winter tourism season, Austria's innkeepers and ski lift operators were worried once again as the number of coronavirus infections shot up shortly before the start of the season — just like last year. In 2020, cable cars and ski lifts remained closed for the entire season. It was a disaster for Austrian tourism. This year could be worse still, now that Germany has designated Austria a high-risk travel destination due to spiking infections.

The decision will come as a huge blow to Austria, which relies heavily on German winter sports enthusiasts. When German holidaymakers stayed away last year following a similar travel warning, it spelt disaster for Austria's ski season. Indeed, just earlier this month, Austria's tourism minister, Elisabeth Köstinger, had assured her compatriots that "the top priority must be that this year's winter season takes place."

That can't be done without restrictions. Infection rates are too high, intensive care units too full. Since early November, only those who have been vaccinated or recovered from COVID-19 are allowed to participate in public life — which includes hitting the slopes. From now on, a negative COVID-19 test is no longer sufficient. In addition, it's mandatory to wear FFP2 masks in ski lifts and cable cars. 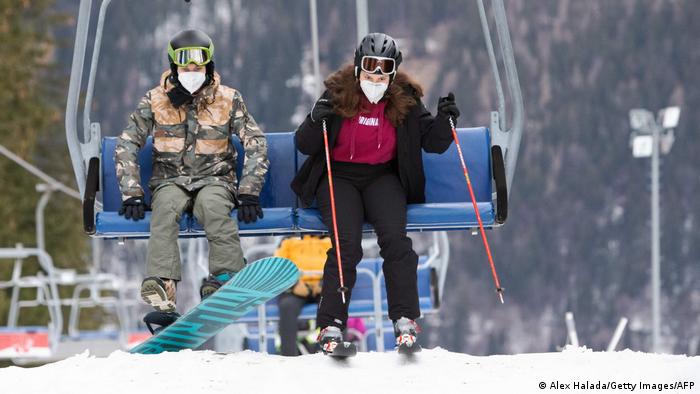 Only some places in Austria opened to skiers in 2020, but hopes are up for this season

Germany's travel warning is no trivial matter. It means that unvaccinated Germans returning from Austria must now spend 10 days self-isolating, and may only break quarantine if they can produce a negative test result on day five, or after. Vaccinated or recovered returnees must complete a digital registration form upon entry.

These re-instated requirements could deter potential vacationers, even though Austrian ski resorts are already off limits to those who aren't immunized, or have recovered from COVID-19. Industry experts believe German families will put off visiting Austria, as parents will want to spare their unvaccinated children from having to quarantine after returning home. Germany's decision will "directly impact the start of [Austria's] ski season," Walter Veit, deputy head of Salzburg’s Hotelier Association, told Austrian public broadcaster ORF.

But Christian Gantner, minister of tourism in Austria's westernmost state of Voralberg, remains optimistic. Speaking to the country's tabloid Kronethosen Zeitung, he said the vast majority of German visitors were fully vaccinated and travelling without children. He also added that some 40% of German youngsters are now vaccinated as well.

For those who have been vaccinated, therefore, little stands in the way of a winter vacation. But even they should carefully read the fine print of the new pandemic-related requirements before traveling to Austria to calculate how long ago they were vaccinated. If nine months or more have passed since their second shot, they'll have to get a third booster shot to be granted access to ski resorts. And only those who can prove they have had COVID-19 within the past six months are considered to have recovered. Children up to 12 years of age, meanwhile, are exempt from these rules.

In Germany, infections are on the rise, too. There were plans to require proof of vaccination or recovery or a negative test across the country to allow for a smooth ski season. While this has not yet been realized, some are now calling for Germany to follow Austria's lead. While many federal states are still hesitating, Saxony and Bavaria, for example, have gone ahead and made proof of vaccination or recovery mandatory in some places.

This is having an effect on the upcoming openings of many German ski resorts. For example, the Zugspitze in the Bavarian Alps will be one of the first German ski resort to welcome winter sports enthusiasts on its slopes from November 19. Here, guests must already show proof of vaccination or recent recovery due to high incidence rates and quickly filling intensive care beds in the nearby town of Garmisch-Partenkirchen. "Having to do without some guests hurts, of course," says Verena Altenhofen, spokeswoman for the Bavarian Zugspitze Railway, in an interview with DW. On the other hand, it increases the level of safety for everyone. Since the winter tourism season was cancelled last year, she says there is a lot of anticipation about the coming season. "The conditions under which it will take place are of secondary importance for the time being," says Altenhofen. 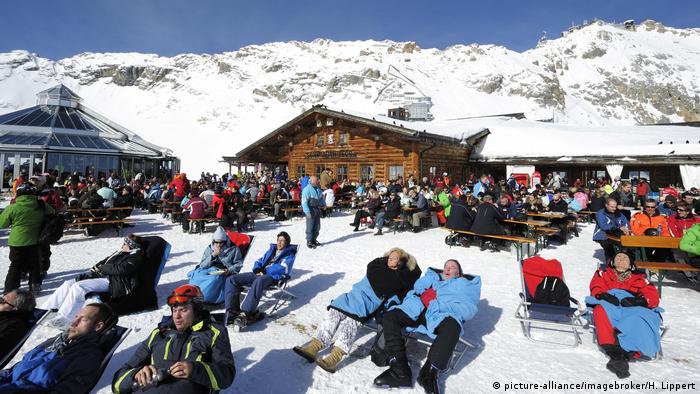 The Zugspitze ski area is getting ready to welcome tourists

At the Zugspitze, FFP2 masks must also be worn in cable cars going up to the slopes. In addition, the cable car should only operate at two-thirds capacity. In the cable car stations, staff will monitor compliance with the measures, and security staff may be present at ski chalets, says Altenhofen. Despite the stricter conditions, she expects operations at the Zugspitze to run smoothly. People have become accustomed to coronavirus protection measures and accept certain restrictions, she said. Most ski areas were closed in Germany and Austria in 2020

Other popular German ski resorts, such as Feldberg in the Black Forest, have also announced stricter coronavirus measures. From December 3, only vaccinated and recovering adults, as well as school-age children who have not yet started school, will be allowed on the slopes. Children, however, must have a negative coronavirus test. At the same time, the new regulation eliminates the requirement to wear a mask and the need to socially distance in the ski area. As in Austria and Bavaria, the stricter requirements are to be checked when ski passes are sold.

While lifts in Austria and Germany were at a standstill last season, skiing took place in Switzerland. This year, the country once again has less stringent restrictions for winter sports enthusiasts. However, the cable car operators in the respective ski resorts are allowed to impose their own protective measures. Holidaymakers should therefore learn about local regulations before starting their trip. In general, it is compulsory to wear masks in all closed cable cars and lifts, as well as in waiting zones. Ski lifts were empty during the 2020 winter season in parts of France, as well as in Austria and Germany

France also requires wearing masks in gondolas, lifts and waiting areas. Infection figures are currently much lower than in Germany or Austria. Strict corona regulations are therefore only to be introduced from an incidence of 200, reports the German press agency DPA. However, the so-called "pass sanitaire," or proof of vaccination, recovery, or a negative test, is required in places such as in hotels, bars, and public transportation.

The rules are somewhat stricter in Italy. When the season opens here at the end of November in most ski resorts, guests must prove they are vaccinated, have recovered, or tested negative for COVID-19. Gondolas and closed chairlifts may also only operate at 80 percent capacity. In addition, safety distances apply in gondolas and queuing areas, and masks are compulsory for people over the age of six.