Almost half of female politicians and parliamentary staff in Europe say they've been threatened with violence, according to a study. A majority of parliaments don't have a mechanism for women to speak out or seek help. 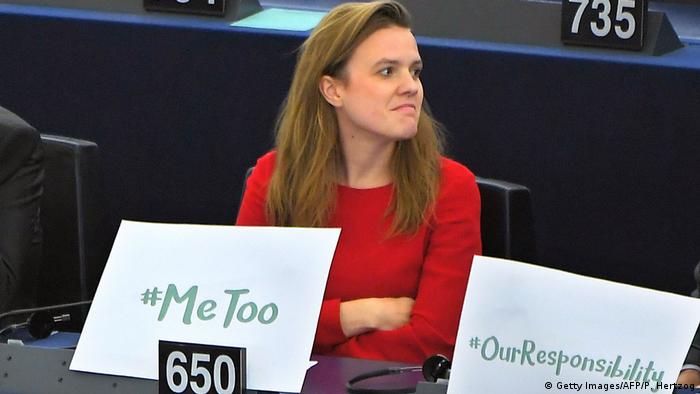 Almost half of Europe's female politicians and parliamentary staff members have at some point received threats of death, rape or beating, according to a new study published on Tuesday. This also included threats to either kidnap or kill their children.

The findings by the Inter-Parliamentary Union, an organization for individual parliamentarians, and the Parliamentary Assembly of the Council of Europe provide a snapshot of how widespread sexual abuse and violence against female government workers is in Europe's parliaments.

Younger women aged 40 or under were found to be the most vulnerable. Among staffers, 49 percent said they had been abused in the workplace; in 70 percent of cases the perpetrator was a male politician.

"As a woman MP myself, I am deeply troubled by these results that show that the problem of sexual harassment in parliaments is even worse than we thought," Inter-Parliamentary Union President Gabriela Cuevas said. "Not only is harassment a severe infringement of women's rights, it's also bad for democracy. We need to acknowledge the perverse effect that this can have on the freedom of action of women MPs."

Tuesday's report was based on interviews with 123 women — 81 MPs and 42 parliamentary staff members — from 45 European countries.

GMF: Women in the arts and feminism in the age of #MeToo

The study also warned that male MPs had gotten away with harassment and abuse because most of Europe's parliaments had failed to introduce the right mechanisms for women to report mistreatment or seek help.

Only 23.5 percent of female MPs and 6 percent of parliamentary staff members who had suffered sexual harassment said they had reported the incident.

Those women who were active in the fight against gender inequality and violence against females were all the more likely to be singled out for attack.

European Parliament in Brussels gets its #MeToo movement

The report's release comes a week on from the launch of a new blog detailing anonymous accounts of sexual abuse at the European Parliament in Brussels.

The group known as MeTooEP said it has decided to lift the lid on sexual harassment inside the EU institution following a lack of action by parliament officials.

Honoring Denis Mukwege and Nadia Murad is the right thing but shows just how much more work still lies ahead, writes Dirke Köpp. (05.10.2018)

Most adults and teens in Germany believe that discussing assault and inequality in schools can help combat these problems. A majority of Germans also believe that workplace discrimination remains a major problem. (13.09.2018)

Regina Ziegler: "There's no such thing as 'can't be done'."