Mukwege: 'Do not treat sexual violence as taboo'

If all men would act and think like Congolese gynecologist Denis Mukwege, it would be a better world. DW's Susanne Krauß met the Nobel Peace Prize winner also referred to as the 'miracle doctor' at his Panzi hospital. 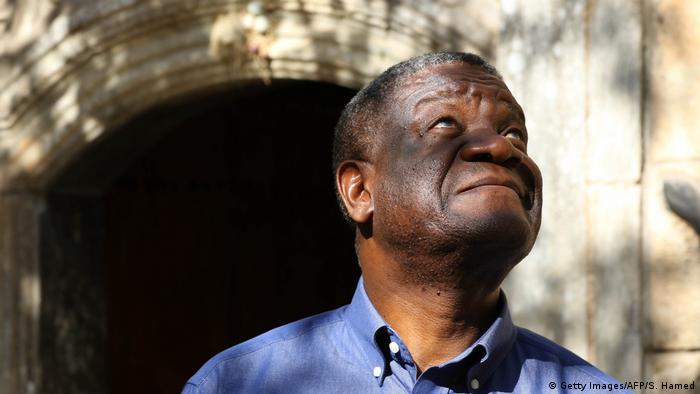 Congolese gynecologist Dr. Denis Mukwege founded the Panzi Hospital in the provincial capital Bukavu. The 63-year-old physician, together with Iraq's Nadia Murad, who is lauded for speaking out on the plight of Yazidi women, will be awarded the 2018 Nobel Peace Prize for his commitment to women who have faced sexual violence.

DW: This year, the Nobel Prize Committee has decided to focus attention on the sexual violence suffered by women around the world. What does the committee's decision mean for you and your colleagues?

Denis Mukwege: I think it was a great decision. Many people in the world and even people in my country do not understand what it means to use rape as a weapon of war. They do not understand how rape can destroy. Not only the victim, but how rape destroys families, society and an entire country. I think it is very important to pay attention to this fact. If a society or a country is destroyed in this way, such destruction could last for many decades. We witness that here at the hospital (in Bukavu, DRC). We must not only tackle this problem for the sake of the victims, but we must also prevent something like this from happening in the future.

Here at the hospital we take care of victims of sexual violence. We do not only treat them physically, but we also have to take care of their trauma. This can take a long time. It depends on the trauma the victim has experienced. And later it is about reintegrating these women into society. And this cannot be achieved if they are not allowed to be independent.

With the three pillars - medical, psycho-social and socio-economic help – we try to restore justice. They (the women) want justice. Perhaps they are doing well economically, but they ask themselves the question: Why did this happen to me? Why is this man who raped me still free? And continues to rape? Today there are women who express themselves and demand justice. But that takes a lot of time.

You have been doing this work for almost 20 years. What has changed and what is the current situation of women in Eastern Congo?

What has changed ... and I can see that today. Today women are fighting to break the silence. When the problem arose in this region it was very difficult for women. Even if there was all the evidence that a woman had been raped and badly injured in the genital area, they usually came with some other reason because they were so ashamed of what had happened. Today I can see that women are stronger. They report to the police and come to the hospital and say, "Look what happened to me and I know who is responsible. I think this is a big step forward in the fight against sexual violence. Because as long as people treat sexual violence as a taboo, something that cannot be talked about, this behavior also protects the perpetrator. Talking about it is one way to show the perpetrators: If you do this to me, everyone will know about it and the shame will not be on my side but on yours. When that happens, things change. As I said, it will take time, but it will happen. 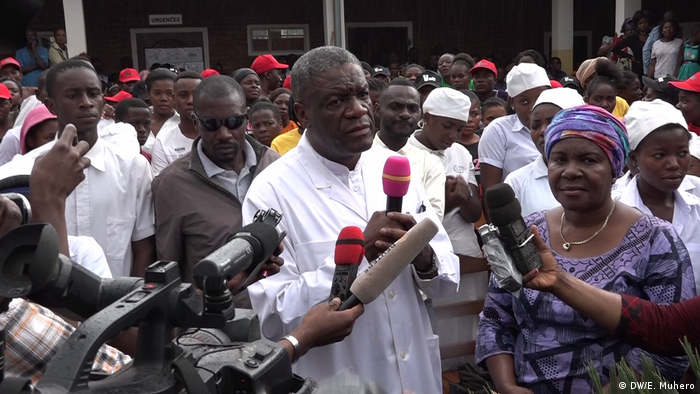 Where does your motivation come from? What gives you the strength for your work?

Whoever meets the women we treat here will see that they could be daughters, wives, mothers, grandchildren. I think those who cannot identify with their counterparts will ignore the suffering of others. I think that is a crucial point. It is very important to me. When I see someone else suffering, I feel compassion and put myself in their situation. That is very important. A second point is that I have seen the strength of women. I am very impressed with how strong women can be. Even if they arrive here under very difficult circumstances, wounded, psychologically humiliated, they stand up afterwards and fight for their rights. This has touched me personally and encourages me to continue.

The #MeToo movement has become known worldwide and receives a lot of attention. How do you see this movement and how is it perceived here in Congo?

We support the #MeToo movement one hundred percent. MeToo is a way to fight against the patriarchal system. It is a way to denounce perpetrators. When perpetrators begin to understand that if they rape and hurt women, that woman will tell the truth and they will feel shame ... Here in the region we are working hard to break the silence. And I think #MeToo has the same goal. If the silence is broken, perpetrators will understand that it is no longer a taboo. That's why I support this movement.

The gynecologist was awarded the Nobel Peace Prize for his work in helping victims of sexual violence in the Democratic Republic of Congo. He shares the prize with Iraqi activist Nadia Murad. But who is Denis Mukwege? (05.10.2018)

Honoring Denis Mukwege and Nadia Murad is the right thing but shows just how much more work still lies ahead, writes Dirke Köpp. (05.10.2018)

The award, worth more than a million dollars, has been given jointly to Denis Mukwege and Nadia Murad for their efforts to end the use of sexual violence as a weapon of war. Murad is the second-youngest laureate. (05.10.2018)