A forestry project in Egypt is using sewage effluent to nurture tree plantations in the desert, preventing desertification. The method has been so effective that it's attracted the interest of German forestry companies. 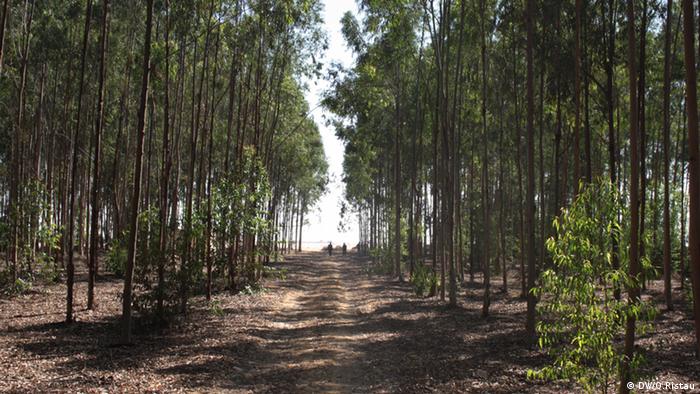 Water sparkles under a clear blue North African sky, not unlike a giant swimming pool surrounded by ranks of trees. But you wouldn't want to swim here.

This body of water in northern Egypt, about two hours by car from Cairo, is a drainage basin for sewage effluent produced by the half-million inhabitants of the nearby town of Ismailia. What's remarkable is that the tree plantation along the banks of the basin is in the middle of the Egyptian desert.

The Serapium forest, as it's called, is the work of a research program initiated by the Egyptian government in the 1990s, aimed at greening 36 different desert locations. A broad variety of native tree species were planted here, alongside commercially valuable non-native species like eucalyptus and mahogany.

The ground under the trees is covered with a layer of dry fallen leaves, but aside from that it's no different from the desert sand surrounding the plantation. Out there in the desert, the sun beats down with a force of about 2,200 kilowatt-hours per square meter - an intensity twice that of sunshine in Germany. Living soil has no chance here, unless sheltered from the ferocity of direct exposure to the Egyptian sunshine. 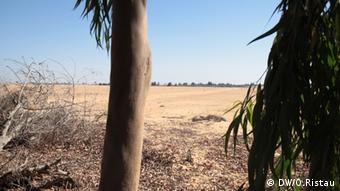 Outside the plantation, the sun beats down with an intensity twice that of in Europe

But inside the plantation sunshine is captured by leaves, powering the growth of the trees. Shade and moisture here allow flowers and animals to thrive. Mosquitoes are on the hunt, and birds tweet from the branches.

Ahmed Ragaie manages the 200-hectare (around 500-acre) plantation, which is not far from the Suez Canal. His crew of 18 forestry workers regularly checks the condition of the trees and measures their growth. They also maintain the network of black irrigation tubes which feed nutrient-laden water from the adjacent drainage basin to the trees' roots.

"Twice a day, each tree is given five liters of water," Ragaie says during a walk through the plantation. "Extra fertilizer isn't necessary - the effluent water delivers all the nutrients that the plants need."

Without regular watering, the trees would quickly dry out and die. Virtually no rain falls in the Egyptian desert. Piped effluent water is the only option. Regular tests have shown the effluent has not contaminated the soil, according to Ragaie.

Fertile soil is disappearing, swathes of land are being eroded away. Through its convention on combating desertification the UN is attempting to stop the desert growing and take back the land. (31.07.2015)

On the World Day to Combat Desertification, DW asks what the commonly used term actually means, why it is such a problem in so many parts of the world, and what can be done to reverse it. (17.06.2015)

Treated waste water is being used to nourish certain tree species in several places in the desert in Egypt. That's creating new jobs as well as preventing further desertification. (10.12.2013)

Household effluent from Ismailia is treated in a two-stage process. In the first stage, coarse dirt or garbage such as plastic or paper are mechanically removed.

In the second stage, oxygen and microbes are added to the effluent. These decompose organic materials, including the stinky stuff.

What emerges is a fluid with a high concentration of phosphates and nitrogen compounds, a first-rate fertilizer similar to what one can buy in powder form at gardening centers.

Sewage effluent was treated in much the same way in Europe until the 1970s. Today in Germany, there's a third stage of treatment during which phosphates and nitrates are removed in order to prevent over-fertilization of the waters into which the treated effluent is subsequently released.

That's also the case in Egypt: effluent only treated with the two-stage process isn't released directly into the Nile Delta, where fruit groves and vegetable gardens would be contaminated by excessive inorganic substances and bacteria. But in areas where nothing is grown for human consumption, trees and other plants are happy to soak up those nutrients.

Hany El Kateb is a forestry scientist at the Technical University of Munich (TUM). For many years, the Egyptian-born researcher has been conducting joint research projects on desert tree plantations with colleagues from Cairo's Ain Shams University.

El Kateb says eucalyptus trees planted in Egypt can produce wood at four times the rate of typical pine plantations in Germany. Egyptian trees are big enough to harvest after as few as 15 years, at which time they produce around 350 cubic meters of wood per hectare. To produce the same amount of wood from a German pine plantation would take about 60 years.

What's more, there aren't really any better or alternative uses for Egyptian sewage effluent. If Egypt were to use 80 percent of its effluent to nurture tree plantations, amounting to about 7 billion cubic meters of effluent per year, around 650,000 hectares of Egyptian desert could be converted to wood production, according to El Kateb's calculations. 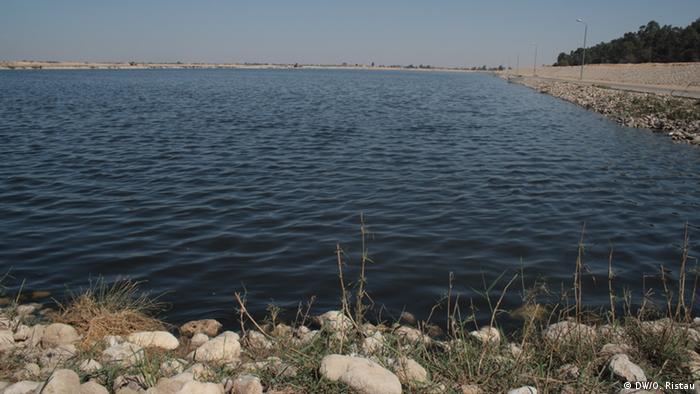 Treated sewage effluent from the town of Ismailia fertilizes the Serapium forest, seen at the upper right

Using drinking water for such a purpose is out of the question - it's far too scarce and expensive. Egypt is 96 percent desert, and the country sources its drinking water almost entirely from the Nile River.

It's a limited and precious resource, rationed out under international agreements with other countries upstream, including Sudan. According to government statistics, agriculture uses four out of five liters drawn from the Nile; households consume barely 5 percent.

Nurturing tree plantations with second-stage treated effluent water, by contrast, could be the basis for a business model in half the world, according to El Kateb. "We can use this to create badly needed jobs in arid regions worldwide, giving people a reason not to leave their home countries," he said.

The method could be used in countries in North Africa and the Sahel, in parts of the Middle East and the Arabian Peninsula, as well as in countries with extensive deserts and arid regions like in Latin America and China. 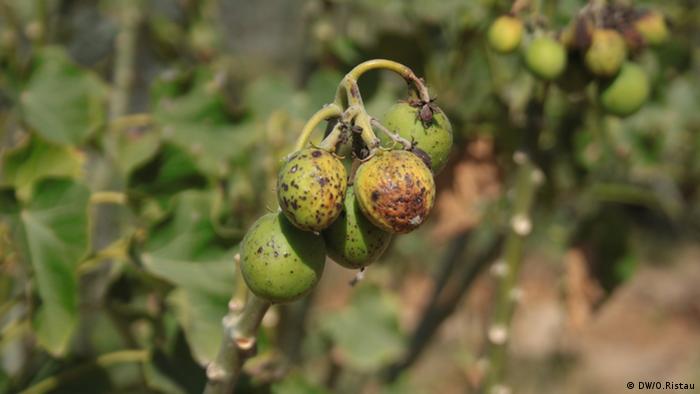 Fast-growing jojoba trees can be planted and used to produce jojoba oil, used in cosmetics

At the same time, the tree plantations would help stop deserts from spreading further, provided they were maintained and not clear-cut. Individual trees could be harvested selectively, but tree cover would have to be kept in place continuously, El Kateb explained.

The UN's Food and Agriculture Organization (FAO) has said forests are the most effective barriers against desertification. According to FAO statistics, deserts are spreading globally at a rate of 23 hectares per minute - about the size of three football fields.

To finance a tree-planting campaign in the desert using effluent, El Kateb has proposed using money from the Green Climate Fund agreed to at the UN climate conference in Paris last December. In addition, the net positive CO2 balance from tree plantations could generate revenues through sale of emissions certificates. 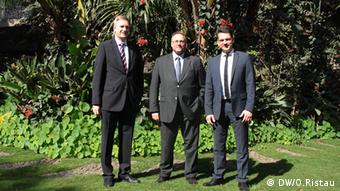 German companies have already taken an interest in the potential of this business model. A forestry services company based in Bonn, ForestFinest, has already been involved in research work in the Serapium forest. Together with wood processing equipment maker Siempelkamp Group, ForestFinest is planning a large-scale tree plantation project for the Egyptian desert.

There's a big potential demand for wood from the proposed plantation. Currently, Egypt's wood products and furniture industries must import all of their raw material from other countries.

Before the Germans can get going with the project, the relevant Egyptian government ministry must first outline a regulatory regime for allocating land and effluent resources. Without access to those two resources, there won't be any possibility for privately financed development of desert tree plantations, said ForestFinest head Dirk Walterspacher.

"It would be important for the regulations to specify that a failure to incorporate biodiversity should be a criterion for project applications to be rejected," he added. This would ensure developers don't get approvals for projects that set up cheap but ecologically underproductive monocultures.