Holding back the growing desert | Environment | All topics from climate change to conservation | DW | 31.07.2015

Fertile soil is disappearing, swathes of land are being eroded away. Through its convention on combating desertification the UN is attempting to stop the desert growing and take back the land.

Deserts are expanding – every year they grow by an area around the size of Ireland. But it’s not a natural process; it’s manmade. Overgrazing, increasing agriculture, deforestation and a growing use of water are eroding the land. And it is particularly affecting parts of Africa, America or Asia.

Preventing the destruction of the soil

An important step was made during the 1992 United Nations (UN) Conference on Environment and Development in Rio de Janeiro – the decision to fight desertification.

The UN Convention to Combat Desertification (UNCCD) has been in place since 1996 and has been signed by 194 countries. Its aim: “promote processes and activities relating to combating desertification and/or mitigating the effects of drought…” (Article 2, UNCCD)

It was not only countries affected by desertification that signed the agreement, but also those that are not, like Germany. And it is there where the responsible UN-secretariat has its base for combating desertification, at the UN Campus in Bonn.

It was here that the UN’s Committee for the Review of the Implementation of the Convention (CRIC), the body responsible for making sure the conditions of the convention are adhered to, met in March. The members regularly meet to examine the status of the 10-year strategy. Ahead of the UN Climate Change Conference COP21, due to take place in Paris later this year, they also made recommendation on how the convention can be effectively implemented. 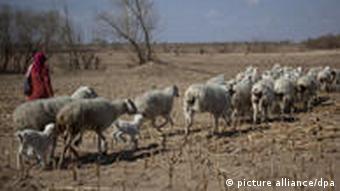 “The most important thing in the last few days was everything surrounding the ‘Post-Sustainable Development Goals’ that were recently negotiated in New York,” said Kauna Schroder, the Bonn-based representative for Namibia, which currently has the COP presidency.

It is yet to be decided as to how far that UNCCD aspirations can be integrated into the climate negotiations. “Our big aim is for a land-degradation neutral world,” said Schroder.

“Nothing will be decided here and nothing agreed,” she said. Comments will only be collected for the next meeting, the “Twelfth session of the UNCCD Conference on the Parties”, due to take place in October in Ankara, and that’s where the concrete agreements will be made.

“The most important convention”

Currently Africa is being particularly affected by the drought and desertification, said Schroeder. And as a consequence, there’s hunger and poverty. “We need the earth for food security,” she added.

For her, it is the UNCDD convention that is most important. Because “without earth or land, we don’t need to speak about climate change or biodiversity,” she said.

Schroder is content that the meeting in Bonn took place. It was an opportunity to make some decisions before the main negotiations. “The way forward meanwhile seems to be correct to me – in order to reach better results and to bring forward our demands,” said Schroder. “We’re going into the next meeting with concrete goals. And that is important!”

From millet to pomegranate, tomatoes to basil - can these plants thrive in hot, dry areas? That’s the question being investigated by researchers at the Jacob Blaustein Institutes for Desert Research in Israel. (12.06.2015)

It requires little water, grows fast and lays deep root - we're referring to the neem. An intiative to plant the "miracle" trees in Peru’s arid north has proven to be a boon for the climate and local communities, too. (13.08.2013)

Farmers use 80 percent of all water in California. During a drought, they have to save more than others. But also urban dwellers have to share the burden. They are asked to cut use by a quarter. (28.05.2015)