Seven people have been given life sentences in Tunisia over two deadly attacks in 2015 that killed dozens of people. The attacks were a significant blow to Tunisia's tourism industry. 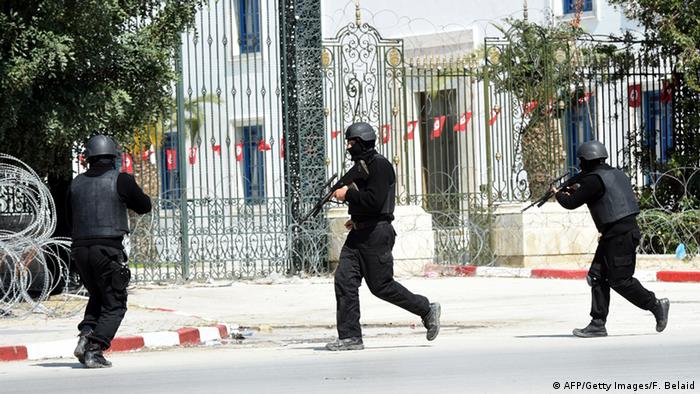 A Tunisian court has sentenced seven jihadis to life in prison for attacks at a museum and beach in 2015 that killed 60 people, including dozens of tourists, prosecutors said Saturday.

Dozens of defendants faced two separate trials over the closely linked shootings, which occurred just months apart in the capital, Tunis, and Sousse, but many were acquitted.

Three were given life sentences for homicide over the first attack in March 2015 at the capital's Bardo Museum, in which two gunmen killed 21 foreign tourists and a Tunisian security guard.

Read more: Tunisia protests: Is there a trade-off between a strong economy and democracy?

Four French nationals, four Italians, three Japanese and two Spaniards were among those killed in the Bardo attack before the two gunmen were shot dead.

Four others received life sentences for the shooting rampage at a Sousse tourist resort in June that year, which killed 38 people, mostly British tourists.

Other defendants were sentenced to between six and 16 years, said prosecution spokesman Sofiene Sliti. Prosecutors said they planned to launch appeals in both cases.

Among those facing trial were six security personnel who are accused of failing to help people in danger during the Sousse attack.

The court heard that the two attacks — both claimed by the Islamic State (IS) — were closely linked.

A number of the defendants pointed to the fugitive Chamseddine Sandi as the person behind both attacks.

Tunisian media have reported that Sandi was killed in a US air strike in neighboring Libya in February 2016, but there has been no official confirmation.

The Sousse shooting was carried out by Seifeddine Rezgui, who opened fire on a beach before storming a high-end hotel, where he continued to fire a Kalashnikov and throw grenades until he was shot dead by police.

Investigations into the Bardo attack showed one of the gunmen, Yassine Laabidi — who was born in 1990 and came from a poor district near Tunis — had amphetamines in his body at the time of the assault.

His fellow attacker Jaber Khachnaoui, born in 1994 and from Tunisia's deprived Kasserine region, had traveled to Syria in December 2014 via Libya.

The Sousse attack, which killed 30 British citizens, is also the subject of proceedings in front of the Royal Courts of Justice in London, which is attempting to determine what happened.

Since a 2011 uprising in Tunisia that toppled dictator Zine El Abidine Ben Ali, dozens of security force personnel have been killed in jihadist attacks.

As well as leaving tens of people dead, the Bardo and Sousse attacks were a devastating hit, from which it has slowly started to recover, to Tunisia's vital tourism sector.

Tunisian arrested in for plotting in Germany linked to Bardo attack

German police have conducted raids in and around Frankfurt targeting suspected "Islamic State" members. Among those arrested is a Tunisian suspected of involvement in the 2015 Bardo Museum terror attack in Tunis. (01.02.2017)

The man had appealed against his deportation from Germany, saying he faced death penalty in his native country. Tunisia order his extradition in connection with a 2015 attack in Tunis which left over 20 tourists dead. (27.09.2018)

Tunis and at least five other Tunisian cities saw violent demonstrations linked to the 10-year anniversary of the Jasmine Revolution that ousted the country's longtime ruler.