Serbia has canceled its decision to expel the Montenegrin ambassador over a diplomatic row. The reversal comes days before a new, pro-Serb government takes charge in Montenegro. 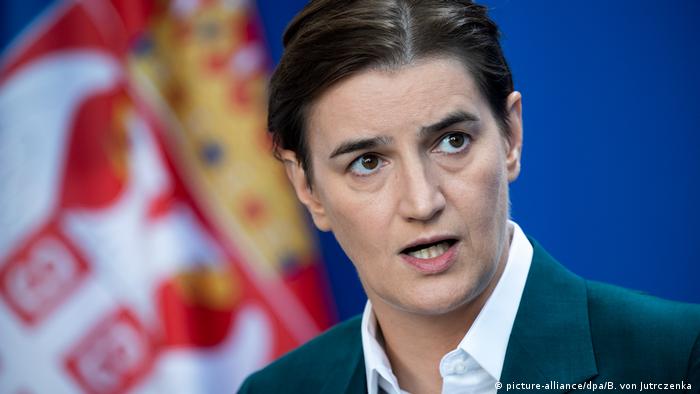 Serbia on Sunday reversed its decision to expel Montenegro's ambassador a day after both countries declared each other's envoys persona non grata over a diplomatic spat.

"We decided that Serbia already tonight unilaterally revokes the decision on expelling Montenegro's ambassador," Serbian Prime Minister Ana Brnabic (pictured above) said. "We decided to do that because we don't want to carry out any hostile act against Montenegro."

Brnabic added that Belgrade wants to extend "the hand of cooperation and friendship" to Montenegro and hoped the decision was made to ease tensions between the two neighbors.

Montenegro on Saturday ordered the Serbian envoy Vladimir Bozovic to leave the country over "long and continuous meddling in the internal affairs of Montenegro," its foreign ministry said.

Bozovic recently praised a 1918 assembly which decided that Montenegro should lose independence and join a Serbia-dominated kingdom. He called the assembly — symbolically annulled by Montenegrin lawmakers in a 2018 resolution — a "liberation."

Montenegro regained full independence after a 2006 referendum, but the history of its statehood remains a painful issue in the Adriatic nation. Nearly 30% of Montenegrin citizens consider themselves ethnic Serbs.

Montenegro's foreign ministry said Bozovic's "behavior and statements (were) incompatible with the usual and acceptable standards of diplomacy."

The dispute between the two Balkan nations is expected to be short-lived as a new pro-Serb government in Montenegro is due to be sworn in on Wednesday.

Montenegro's Prime Minister-designate Zdravko Krivokapic slammed the outgoing government's decision to expel the Serbian ambassador and has vowed to work on "healing Montenegro's relations with Serbia."

"The outgoing regime, even in its last days, is not refraining from the polarization of society and the deepening of divisions," Krivokapic tweeted. "Such acts are not in the spirit of the European path and good regional cooperation of friendly countries."

Under Djukanovic, who is now the president, Montenegro joined NATO in 2017 defying its traditional Slavic allies Serbia and Russia, and has taken steps to join the EU. His opponents accuse the veteran leader of corruption, nepotism, media censorship and ties to organized crime.

"The new government will work to improve Montenegro's relations with Serbia, we will promote a truly good-neighborly policy with Belgrade, as well as with everyone in the region, on the principle of sovereignty, independence, and non-interference in the internal affairs of other countries," PM-designate Krivokapic said.

As Russia and others continue ramping up their influence in the Western Balkans, the goal of EU membership is becoming more distant than ever. What should Europe be doing to prevent the death of democracy in the region?