Serbia is vaccinating faster than the EU — with the help of China. The People's Republic is also investing in train lines, steel mills and surveillance technology there. 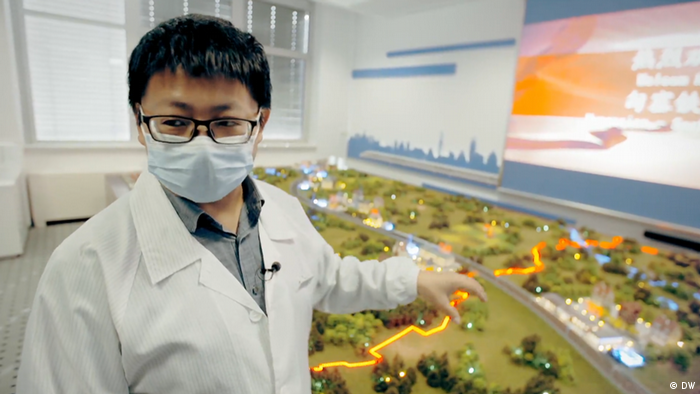 Fast train from Belgrade to Budapest? "No problem," says engineer Yu Hui, overseeing the project for China Railway in Serbia

The man in the plain white coat, who appears friendly and patient, does not fit the pompous image of the "iron friendship" between Serbia and China. Yu Hui calmly shows a model railroad that fills half the room at China Railway's Belgrade headquarters.

"It's not a particular challenge for me," says the Chinese engineer. "I've not only been to Pakistan, but also to Egypt, Iran, Argentina."

The high-speed rail line between Belgrade and Budapest will soon resemble this model — built by Chinese and Russian companies. To this end, Serbia is taking out loans worth billions from both countries. 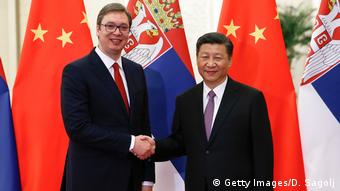 What is business as usual for Beijing on the New Silk Road means a lot for the small Balkan country. Here, trains barely travel faster than 50 kilometers per hour (31 miles per hour) on average. And now, it's about to go about four times as fast? For China, it's about optimizing the connection from the Greek port of Piraeus to Western Europe.

"We lie directly on the way to one of the biggest markets in the world: the European Union — with 500 million people," says Marko Cadez, president of the Serbian Chamber of Commerce.

'The Chinese are a godsend'

Chinese investors see the advantages of Serbia, a country which has extensive trade agreements with Brussels, but is not an EU member and is therefore not subject to the bloc's strict rules.

For his part, in Belgrade, President Aleksandar Vucic is a pragmatic autocrat who keeps the media on a tight leash and forges ahead with his witch hunt against the opposition. His populist Progressive Party rules in the tiniest of villages. Whether it's the opening of a Chinese-built bridge in Belgrade or a new section of highway, Vucic and the TV cameras are there.

"The Chinese built us bridges and roads that Europe was not interested in," says Milomir Maric, the country's best-known TV presenter. In the studio of the private, government-aligned station "TV Happy," there is wallpaper simulating bookshelves. What the studio lacks, however, are critical voices. The president himself is a regular guest there, and Maric is on a first-name basis with him. 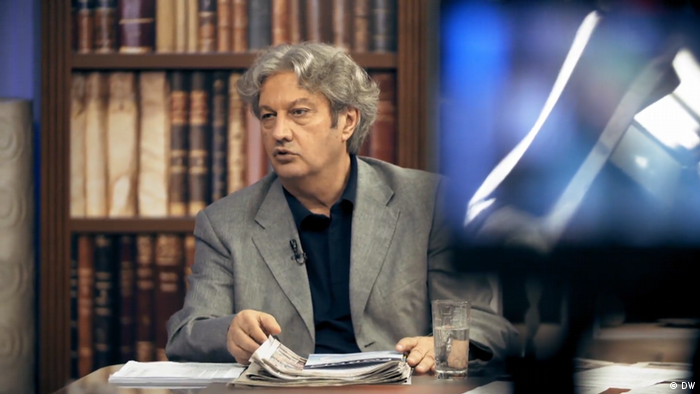 As a young man, Maric dreamed of what he calls the "American dream": joining the EU, being part of the West. Now, he believes he will not live to see it. This is partly because the governments in Berlin and Brussels are setting political conditions — that Serbia should accept the independence of the former southern province of Kosovo, for instance. On the other hand, in the UN Security Council, Beijing and Moscow have opposed Kosovo's secession.

"For us, the Chinese are like a godsend — they've given us loans, but they've also taken on a major part of the work," Maric said.

The money flows back to China

One example of what Maric means could be observed several few months ago on a sunny day in the Belgrade district of Zemun. There, a station for a fast train line was being completed. Serbian workers were hardly present. Instead, most of them were from China, but they did not want to speak with journalists, not even to merely say how they were doing in Serbia. 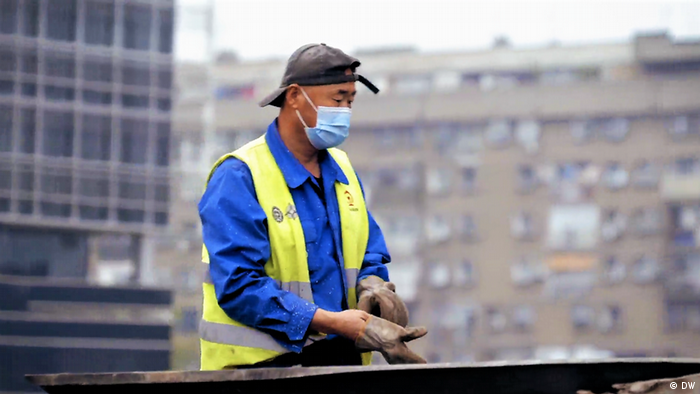 Requests for interviews with Chinese companies and Serbian ministries have also been in vain. Chinese firms also now operate a huge steel mill in central Serbia, a smelter and copper mine in the east of the country, and a tire factory in the north.

Environmental standards seem to take the backseat. Jobs in Serbia, however, appear to be the top priority — even though most people have to get by on less than €500 a month ($607) and many jobs depend on the mercy of the party.

According to the government, Chinese "investments" amount to €10 billion ($12 billion) in recent years. But the Central Reserve Bank's data up until 2019 shows only 1.6 billion of that at hand — a fraction compared to investments from the EU.

Critics believe that the Chinese have not been investing at all, but that they merely lend the money for the construction projects. The contract is then awarded to a Chinese company and it is Chinese workers who work on the construction sites. In addition to French companies, Chinese companies are also to build the subway in Belgrade starting next fall. 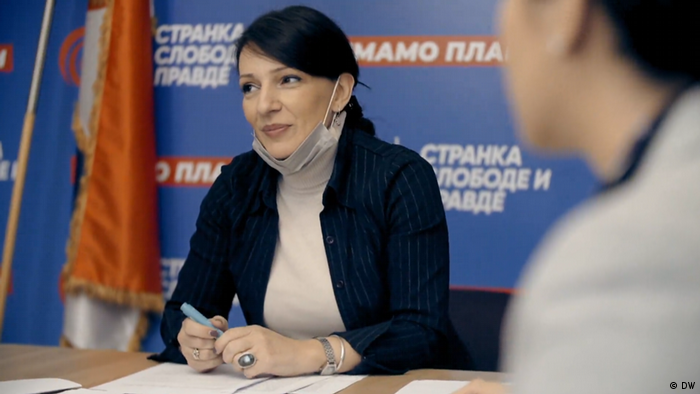 'No insight into how the money is spent,' says opposition politician Marinika Tepic

"What rattled us was the drastic price difference for the construction," says Marinika Tepic, of the opposition Freedom and Justice Party. Since China has gotten involved, the project is expected to cost €4.4 billion — twice as much as previously envisaged, before Chinese involvement. It is a monumental task for Serbia, with a state budget of just €11 billion per year.

Investments would be helpful, Tepic says. Less productive is the throwing money out the window and the corruption she suspects. "We have no insight into how the money is spent since Chinese companies are protected like polar bears by a bilateral intergovernmental agreement," Tepic says. Due to her criticism, she has been called a "traitor" in tabloids, and she has also received death threats.

But even the harshest critics of President Vucic and his love for China have fallen silent in recent weeks. Due to the supply of a million doses of the COVID-19 vaccine from Chinese manufacturer Sinopharm, Serbia is vaccinating much faster than EU countries. Citizens are even allowed to choose whether they want Chinese, Russian or Western vaccines. 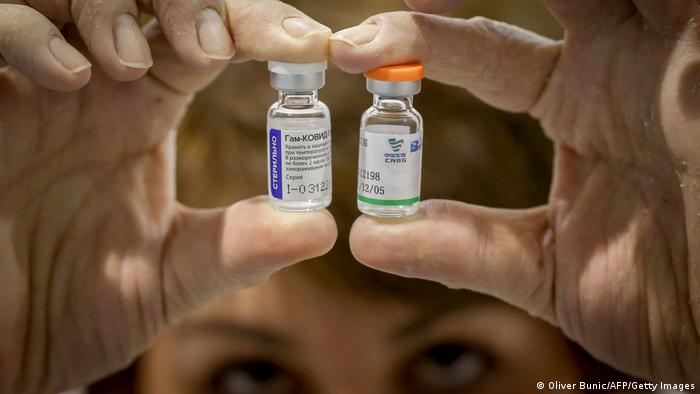 From which country should the vaccine come: Sputnik from Russia (l) or Chinese-made Sinopharm China?

It is pure geopolitics in the fight against the pandemic. Hungary, the neighbor to the north, is following suit and ordering vaccines from China. Even German Chancellor Merkel says she has nothing against vaccines from the Far East, as soon as they are approved by European authorities.

Huawei is watching you

Serbia as a pilot project of the Chinese on their march to Europe? Nevena Ruzic fears this is the case. On Republic Square, in the center of Belgrade, between the National Museum, the People's Theater and the pedestrian zone, the lawyer points to white security cameras. 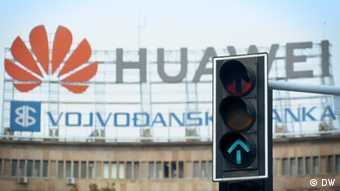 Over a thousand such cameras by the company Huawei have already been installed in the Serbian capital. The police remain silent, however, about their exact location, forcing activists to go on a search for them and mark them on a map. It is unclear whether the Serbian police are already using the facial recognition features.

What is certain: Belgrade is the first European city in which "smart" cameras can be found throughout the city. Boasting the name "Safe City," this is also intended as an advertisement for Chinese surveillance technology.

"There was no consultation in parliament or among experts. No information was made publicly available explaining why we would need this," says Ruzic, who works for the Open Society Foundation in Belgrade.

Unlike in Europe, privacy is not a fundamental human right in China, she said. "Therefore, we should already ask ourselves whether we should share such sensitive information with such companies across borders."