An Indonesian museum has taken down a wax sculpture of Nazi Germany leader Adolf Hitler after it sparked global outrage. The statue was a popular attraction for visitors who took selfies in front of the exhibit. 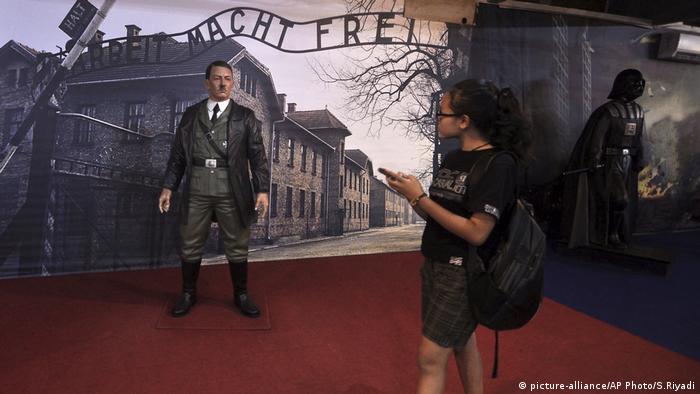 The De ARCA Statue Art Museum in the Javanese city of Jogjakarta drew condemnation from Jewish groups, foreign media and human rights organizations for putting up Adolf Hitler's wax statue against a backdrop of the Auschwitz concentration camp.

The exhibit featured the Nazi leader in a dominating pose standing in front of a large photo of the gates of Auschwitz, where the Nazis killed more than 1.1 million people during World War II.

The Simon Wiesenthal Center, a Los Angeles-based Jewish organization that campaigns against anti-Semitism, had condemned the sculpture as "disgusting" and demanded its removal.

Jamie Misbah, the museum's operational manager, confirmed Saturday they had taken down the figure.

"Our purpose to display the Hitler figure in the museum is to educate [people]," Misbah elaborated.

There are about 80 sculptures of world leaders and global celebrities in the museum. Visitors take selfies with the statues and circulate them on social media.

"I can confirm that the statue has been removed," said Andreas Harsono, an Indonesian researcher at Human Rights Watch.

"We welcomed the decision because regardless of the intention, depicting Hitler as if he were a respected figure is in bad taste," he added.

It is not the first time an Indonesian establishment has shown insensitivity toward the Nazi atrocities, including the Holocaust. In January, the authorities had to shut down a Nazi-themed café in the western Javanese city of Bandung.