The Syrian army has returned one of two Russian pilots from a jet shot down by Turkey to a Russian airbase. Russia said it will deploy its advanced S-400 air defense system in response to Turkey's actions. 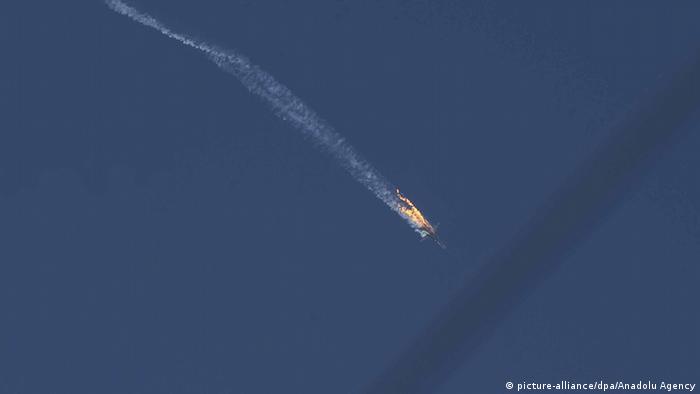 Russia's ambassador to France confirmed the pilot had been rescued on Wednesday.

"One on board was wounded when he parachuted down and killed in a savage way on the ground by the jihadists in the area and the other managed to escape and, according to the latest information, has been picked up by the Syrian army and should be going back to the Russian air force base," ambassador Alexandre Orlov told Europe 1 radio.

Rebel videos of the first pilot show him dead and bloody. The rebels said they fired on the parachuting pilot on his way down, but it is not immediately clear whether the pilot was killed while in the air or once he landed.

Another Russian soldier was also killed when a helicopter search-and-rescue mission came under rebel fire.

A rebel YouTube video that cannot be verified showed rebel fighters blowing up a downed Russian helicopter with a TOW anti-tank missile. The US, Turkey, Saudi Arabia and Qatar have provided rebels with TOW missiles.

The mountainous area along the border had been under Russian and Syrian regime attack recently, prompting Turkey to protest the assault on ethnic and linguistic Turkmen "brothers" it has backed for years during the Syrian conflict.

The downing of a Russian jet has heightened geopolitical tensions across the region, threatening to jeopardize fledgling cooperation between the West and Russia against the "Islamic State" group and talks on a political transition in Syria.

Turkey has defended its right to protect its airspace even as criticism that it could have shown more discretion rolls in. Turkey's airspace is violated dozens of times a year - mostly by Greece and Israel - but new rules of engagement established a few years ago along the Syrian border allow for pilots to fire on jets violating its airspace.

Russia maintains the jet was shot down over Syrian airspace and landed 4 kilometers (about 2.5 miles) inside the Syrian border. Russia has challenged Turkey's claim that it warned the jet 10 times in five minutes before it entered Turkish airspace for 17 seconds.

A US official told Reuters on Tuesday that Washington believed the Russian jet was destroyed while inside Syria after briefly entering Turkish airspace.

While ostensibly backing Turkey's right to protect its borders, NATO, the US and EU have called on Turkey to show greater discretion and urged Ankara and Moscow to deescalate the situation.

Russian President Vladimir Putin described the jet downing as a "stab in the back" and vowed "serious consequences." 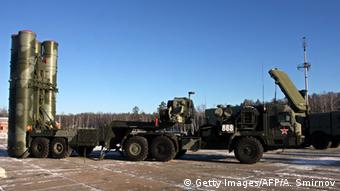 In response, Moscow ordered its guided missile cruiser to be stationed near the Syrian port of Latakia and fighter planes to escort bombers. On Wednesday, the military said it would deploy its advanced S-400 anti-aircraft missile system to Syria.

Speaking in Istanbul on Wednesday, Turkish President Recep Tayyip Erdogan said Turkey would like to avoid escalation with Russia but defended its right to protect its borders and ethnic Turkmen.

"We have no intention of escalating this incident. We are only defending our own security and the rights of our brothers," Erdogan said, referring to Turkmen.

A Russian warplane has been shot down by Turkish F-16 fighter jets, purportedly after it violated Turkish air space. NATO ambassadors are to meet in a special session later in the day to discuss the incident. (24.11.2015)