Unwanted by the poultry industry, billions of male chicks are thrown into mechanical shredders or gassed to death the moment they enter this world. German researchers have developed a more humane alternative. 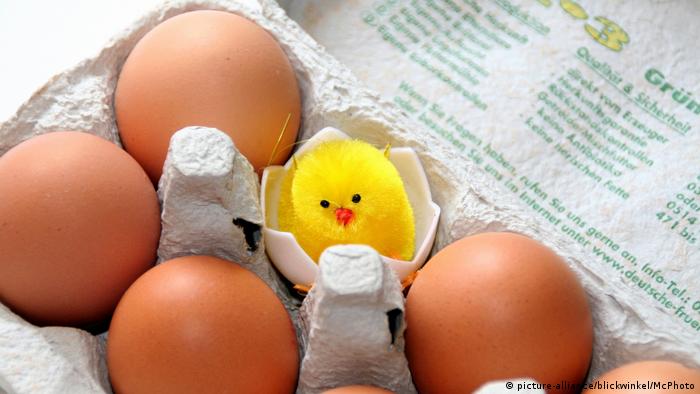 Poultry farming is a particularly unpleasant business - especially for male chicks. Because they are not well-suited to be raised for meat - and because they don't lay eggs - about 45 million male chicks are killed shortly after they hatch each year in Germany alone. Worldwide, that figure is put at about 2.5 billion.

On industrial livestock farms, the baby birds are usually suffocated with carbon dioxide or shredded alive in a mechanical chopper.

Germany's Agriculture Minister Christian Schmidt is set to unveil a machine that could put an end to the mass slaughter of male chicks.

The machine uses a process of "in-ovo" sex determination and was developed as part of Agriculture Ministry-supported research project led by the University of Leipzig.

Researchers managed to establish a method for determining the gender of fertilized eggs as early as 72 hours after the incubation process has started.

The method is "an economic, practical and appropriate alternative" to shredding, said Schmidt, who will present the new prototype at Berlin's International Green Week, which opens on Friday (20.01.2017). 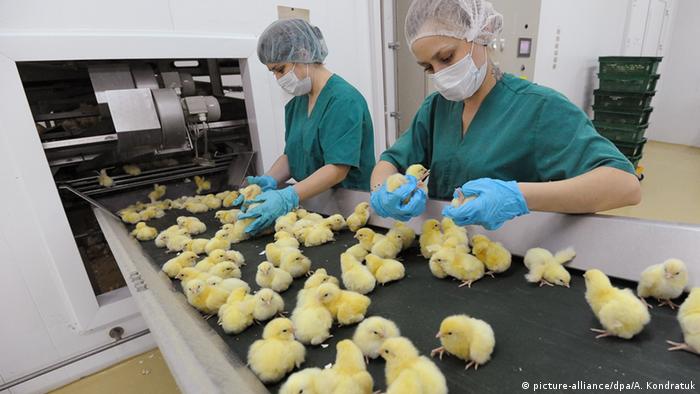 While Schmidt himself has long argued that the shredding of chicks should be stopped, it's proven difficult to end the practice. Until now, the shredding of male chicks has been - at least as far as the bottom line is concerned - a necessary evil.

Green party agricultural spokesman Friedrich Ostdorff says the new invention is not enough, and accuses Schmidt of posturing with new technology but failing to introduce a law to end shredding.

"That really isn't something that can be achieved with a nonbinding technical demonstration during Green Week," said Ostdorff. "What's needed for that is binding political action and a specific timetable." 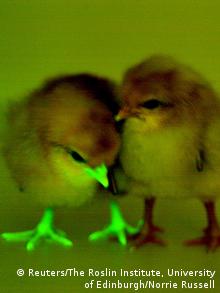 But Schmidt believes the existence of the equipment can bring about an end to the legal defense that many firms use to justify shredding under animal rights legislation.

In May 2015, a court in the German city of Münster ruled that the shredding of male chicks is permissible because animal protection laws allow for animals to be slaughtered if there are sound economic reasons to do so.

"With this, we will do away with this immoral and unethical practice in 2017," said Schmidt. Merely banning the process would simply shift the killing of chicks abroad, Schmidt believes.

To this end, it's also hoped that process won't be limited to Germany, Schmidt believes. "There have already been inquiries from other countries," the minister said.

The new machinery would allow poultry breeders to determine the gender of the egg just three days after it has started being incubated, with the eggs being sorted automatically by the machines.

The method involves using a laser drill to open a tiny hole in the eggshell, lighting up the interior. Researchers found  they could work out the gender by analyzing the way the egg's blood cells scatter light using near-infrared Raman spectroscopy.

The hole in the shell is then sealed again, and female embryos can be incubated as normal. The "male" eggs, meanwhile, can be used in a number of industrial processes, including animal feed.

An advantage of using lasers and light is that the process is contactless, and so doesn't require disinfection or replacement parts.

But in developing the process, technologists have been presented with a number of challenges, such as reducing the time needed to conduct the tests.

Another problem has been the need for a large opening in the eggs, which means an increased amount of germs can get into the egg during the incubation process. It's an area where the German Poultry Association ZDG sees a need for more research.

The ZDG has previously commended Germany for taking the lead in the search for a more humane solution, but also called for a joint European effort. The association says that "unilateral action on the national level could lead to a shift of production abroad."

The procedure would only add a few cents to the cost of an egg. In fact, the technology may even offer economic advantages, because male eggs can be sorted out before having to be incubated for the remaining 21 days.

Prospects for male chickens are still far from rosy - they die either way. With the new method, though, it'll happen much earlier - and it's hoped, with less pain and suffering.

Global warming may threaten many bird species. Some chicks, though, are hatching well prepared for higher temperatures. Researchers say it's all thanks to their parents' song. (18.08.2016)

Every year billions of chicks are killed as soon as they hatch simply because they are male. The German parliament has decided not to ban the practice. It's feared a ban would weaken German agriculture. (18.03.2016)