Every year billions of chicks are killed as soon as they hatch simply because they are male. The German parliament has decided not to ban the practice. It's feared a ban would weaken German agriculture. 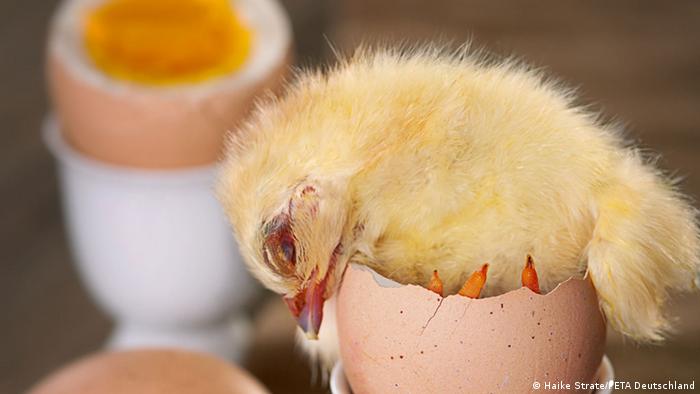 They're known as one-day chicks - baby chickens that never grow older than a day. Thousands of them are killed every day across Germany. The reason: They are male, they won't lay eggs, and so feeding them simply isn't economically viable.

Animal rights activists want the practice stopped. So do the Greens. The party introduced a bill in the German parliament calling for a ban on the killing of chicks following a transition period to allow agriculture to adjust. On March 17 parliament voted against the bill.

"Animal well-being cannot be achieved using the sledgehammer approach, but only in accordance with the livestock owners," says Dieter Stier of the ruling Christian Democratic Union (CDU). "Otherwise, animal production will move to another country."

The hidden facts of egg production

When chicks are hatched in industrial hatcheries, workers sort the seething fluffy masses into male and female. The hens go onto the right-hand conveyor belt, are packed into boxes and sent to breeding farms. The cocks, meanwhile, end up on the left-hand conveyor belt, where a steel slide sends them to certain death.

"There are chickens for fattening and there are laying chickens, which lay a lot of eggs," explains Marius Tünte from the German animal protection organization Deutscher Tierschutzbund. "So the male chicks among the laying breeds don't have any economic value. That's why the decision was made at some point to kill all the male animals." 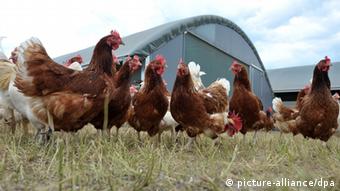 Only the laying hens survive

More than 40 million animals are killed in this way every year in Germany - and about 2.5 billion worldwide. It's all part of increased specialization in the industrial farming sector, says Tünte.

The male chicks are either chopped to pieces in a kind of chaffcutter fitted with multiple sharp knives or gassed using carbon dioxide.

"In both cases, the animals often have to suffer before finally dying," says Tünte. "In the chaffcutter, animals occasionally survive severely injured, and in the videos of the gassing you see clearly that the animals fight for air before they die."

The dead chicks are then ground into animal meal before being burned. Some of the gassed chicks end up as feed for birds of prey in zoos, but according to Deutscher Tierschutzbund, they only amount to a few percent.

It is only after the chicks have been sorted into male and female that the companies decide whether they are to be reared in a cage, or if they are to become "organic hens." Organic farmers buy their laying hens at the breeding farms, too - so organic farms cannot opt out of the system. 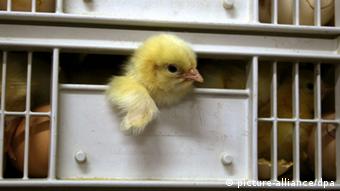 Even organic hens come out of breeding farms

"At the moment, there are no alternatives to the market," Gerald Wehde, spokesman for the farming association Bioland, told DW. "All we can do is to try to alleviate the situation a little."

On top of this, farmers generally slaughter the laying hens as soon as they are a year old and begin to molt. Bioland advises its members to let their hens live a little longer, because they still lay eggs after molting, if not quite as many.

If more hens were allowed to live into their second laying period, farmers wouldn't have to buy as many laying hens, Wehde says: "Then we could at least reduce the number of murdered chicks, if not actually stop it."

According to Paragraph 1 of Germany's Animal Protection Law, animals may only be killed for a useful reason. Animal protection advocates, and indeed some lawyers, have their doubts about whether such a reason can be said to exist in the case of one-day chicks.

The German Ministry for Food, Agriculture and Consumer Protection said, in reply to DW's request for a statement, that "the killing of male one-day chicks should be the last resort after all other possibilities for the use of the animals have been exhausted." But, according to the industry, there is no other use for the animals except for the unprofitable fattening.

Most parties and even the breeding firms themselves have now grasped that the killing of billions of chicks worldwide each year is neither practical nor morally defensible. They incubate vast quantities of eggs every year for no useful reason, and have to dispose of the dead chicks afterwards. 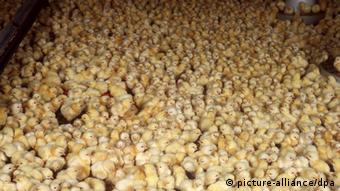 100,000 chicks are hatched every day in some farms

"No one, including the industry, actually wants to have to kill healthy male one-day chicks," says Maria-Elisabeth Krautwald-Junghanns, a veterinarian and researcher at Leipzig University. She is looking for ways to potentially determine the sex of a chicken embryo even before it is hatched. She hopes her research will mean that in the future, only female embryos will be incubated.

For chicken breeders and animal protection advocates, the best solution would be to develop chicken breeds that are suited for both - the females lay eggs, while the males can be fattened. This was common before 1950. But sorting chicks on the basis of their sex has become normal now because high-performance breeding is more efficient.

In other countries, such as Italy or Switzerland, the concept of the dual-purpose chicken already exists as a niche product. In Germany, it is about to be introduced to the market.

Until then, consumers who want to boycott the killing of chicks have only one option, says Tünte, namely "to abstain or eat fewer egg-based products."

The European Court of Human Rights has upheld a German ban on a poster campaign that drew analogies between intensive farming and the Holocaust. A Berlin court ruled that the images trivialized Nazi atrocities. (08.11.2012)

Poultry and wild birds in Europe are dying of bird flu. This time, the epidemic has been particularly deadly. Christina Strunck reports from the Netherlands, which has a high number of poultry farms relative to its size.

The mass killing of Danish minks shines a spotlight on a highly dubious industry. It also shows how little we value the lives and deaths of so-called farm animals.