In order to take advantage of high wind speeds on the open seas, the race is on to create wind turbines and wind farms that float on the surface of the water. But, the jury is still out on which is the best method. 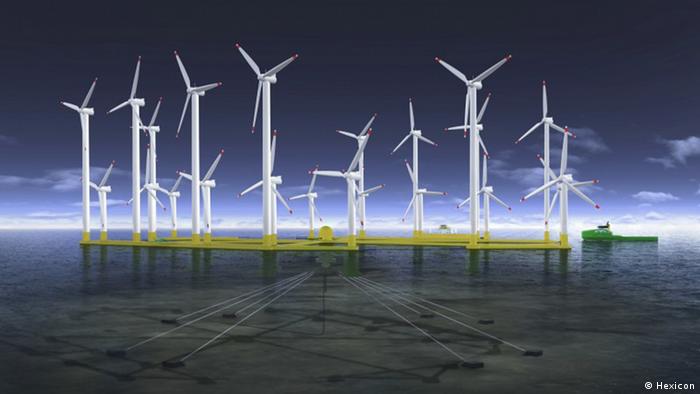 Erecting a wind turbine in the middle of the ocean is a costly and time-consuming business. Most importantly, the structure must be anchored at the bottom of the sea to ensure its stability in the face of extreme wind and rough seas. The project is normally only feasible up to depths of 50 meters of water.

But, a new generation of wind turbines no longer has that problem. Mounted on pontoons which are attached to the ocean floor by long steel cables, floating wind turbines are now the new trend in the renewable energy scene. First prototypes are already being tested.

The world's most advanced floating wind turbine has floated in the North Sea off Norway since 2009. It's called the Hywind turbine, and looks like a kind of giant, bottle-shaped buoy. The tower with the rotor blades at its tip rises high into the air, while the body of the turbine is settled deep in the ocean, weighed with cement ballast. This gives it the stability it needs to stay upright in heavy weather. 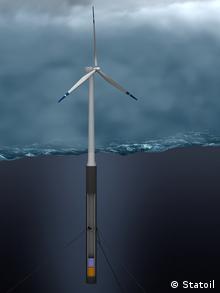 The "Hywind" floating wind turbine, with its cement ballast

But it's not the only way of producing a floating wind turbine. The alternative to a floating buoy like Hywind, is a floating island. Windfloat, installed off the Portuguese coast in 2011, is a turbine mounted on a large triangular base, with three separate floating corner pontoons.

Sweden's Hexicon firm has ambitious plans. They want to design a pontoon that measures half a kilometer in length, scheduled to carry 24 turbines. It's a floating wind park complete with its own power station.

With all of the options, cables tether the installations to concrete blocks on the floor of the ocean. The companies involved say that the turbines can be based in waters that are up to 700 meters deep.

Frank Sandner, an engineer at the University of Stuttgart, says the technology has massive potential. "Many countries all over the world have steeply sloping coasts," he told DW. "Floating wind turbines are the only chance to utilize the wind energy out on the ocean."

An additional advantage of floating wind parks is the cost. The rotor blades are mounted on land, in a dry dock, before the installation is towed offshore. That means there is no need for costly construction work on the high seas.

There are, however, disadvantages. Like a ship, the floating turbines rock and heave on the waves. In principle, the solution to that problem is simple – make the device heavier so that it less susceptible to waves. That calls for an extremely large amount of material, Sandner says. "With the current cost of steel, that would be much too expensive."

Engineers are working on alternative solutions to get around the extra material costs. Intelligent systems that would pump ballast water from one tank to the next to stabilize the wind turbine or the option of tightening the cables that moor the structure to stabilize it in heavy seas.

No matter what tricks engineers come up with - they will never succeed in stabilizing the floating turbines to an extent that they stand completely rigid and fixed. They will always rock.

"In the swell of the waves, the installations can easily tilt by up to 15 degrees," according to Andreas Heege, the director of Barcelona-based LMS Samtech, a company that produces specialized wind power software. He adds that today's generation of wind turbine rotor blades are not designed to function in those sort of conditions. 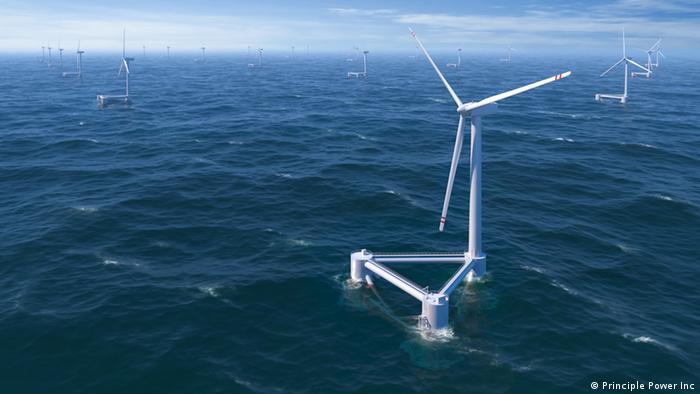 Windfloat is a three cornered pontoon island, that floats on the surface of the sea

Exposed to constant motion, floating wind turbines experience much more wear and tear than fixed offshore facilities. The rocking motion also interferes with power generation. When the installation reels into the wind it is hit by significantly stronger winds than just a moment later, when it rocks back into the other direction. "The result is erratic power generation that we have to balance by carefully adjusting the rotor blades," Heege said.

One thing is clear. Mounting a regular wind turbine on a pontoon is not likely to function. Engineers will have to develop new, specialized rotor blades.

Which of the two different concepts currently being tested – either the turbine weighted with ballast or the floating wind park island – will win the race is not yet settled. Both prototypes are doing quite well, Frank Sandner said. "Which concept is superior has not yet become apparent."

In both cases, the most important question is commercialization. That means, which is of the turbines can be produced reliably and at low cost. Experts say the structures would have to be more slender than at present, using much less material - which in turn would threaten stability.

It is akin to a tightrope act, said Andreas Heege: "To make the proposition profitable, we will have to push ourselves to our technological limits."

The sparsely populated region of Caithness in northern Scotland once prospered thanks to a nuclear energy test facility. Now wind and wave energy are set to take over. (19.11.2012)

Old World War II munitions pollute German costal waters, and disposal is dangerous for both humans and the environment. The unexploded bombs also slow the construction of offshore wind turbines. (07.11.2012)