Old World War II munitions pollute German costal waters, and disposal is dangerous for both humans and the environment. The unexploded bombs also slow the construction of offshore wind turbines. 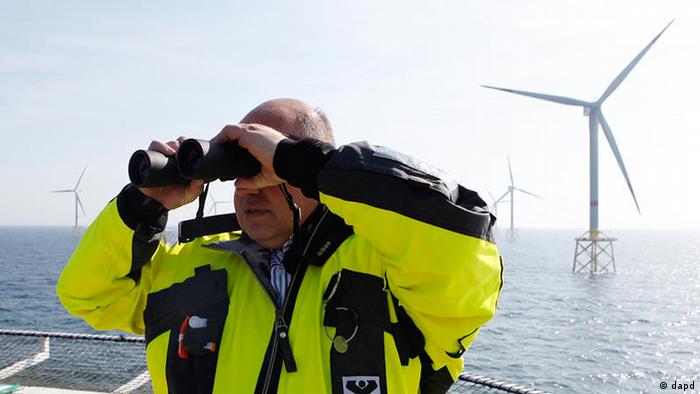 Waves gently lap against the beach in Norddeich. The small, picturesque town in northern Germany is popular with tourists. But few of them are aware that unexploded bombs, landmines and other munitions are buried under the waves, just a few kilometers from the beach.

"There are some one point 6 million tons of munitions in German seas," according to Bernd Scherer, who is responsible for marine protection at in the state of Schleswig-Holstein's Environment Ministry. The state borders both the Baltic and the North seas. 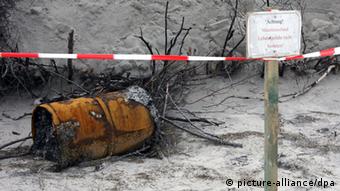 Hundreds of thousands of aerial mines, bombs, shells and unexploded ordnance are buried in Germany's coastal waters. Most of them have been left to rot for more than half a century.

At least 1.3 million tons are buried somewhere in the North Sea.

Between 1945 and 1948, a huge part of these weapons was dumped under the supervision of the British occupying forces.

"After World War II, the main goal was to quickly get rid of masses of old ammunition stemming from the war times," Scherer said.

All types of ships and boats were employed to dump ammunition. Even private trawlers carried bombs to destined dumping areas and were paid for each trip.

For decades, the underwater dumps aroused little concern as coastal waters were considered convenient dumping grounds for a wide variety of noxious substances. 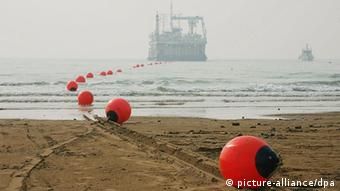 But now, things are changing. Offshore wind farms are an integral part of the German government's renewable energy agenda - and the buried ammunition is slowing down their construction.

Boskalis Hirdes, an international company that disposes of unexploded ammunition, has found far more unexploded ordnance than originally expected, according to its technical director, Jan Kölbel.

Kölbel's team is clearing the route for an underwater cable operation to a wind park off the East Frisian island of Borkum. The experts expected the cable to cross one of the 18 assumed dumping grounds, but they were surprised by the extent of the dump.

"Out of some 600 targets, around 350 turned out to be unexploded ordnance", Kölbel said.

In August, Kölbel's team neutralized an air mine from the Second World War on a sand bank in the North Sea. In the majority of cases, a controlled detonation is the only safe way to dispose of old ammunition.

"With respect to the fuses installed in this kind of ammunition there's no chance to transport it", Kölbel said. "We definitely have to blow it up in situ." 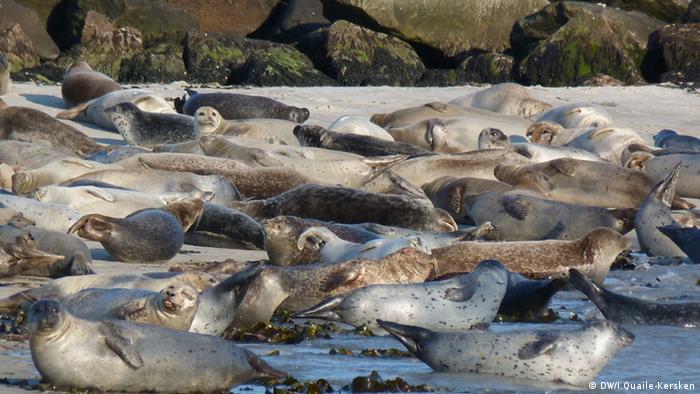 Seals and other sea mammals are sensitive to explosions

But controlled detonations have a huge impact on marine life. Porpoises, grey seals and common seals all live in this part of the North Sea, said Peter Lienau, director of the Seal Station in Norddeich.

"When a controlled detonation takes place under water it obviously isn't good for those mammals", said Lienau, adding that even above water level, detonations are dangerous to sea mammals, particularly during certain times of the year.

When ammunition is detonated during the rearing phases of the common seal in June/July or of the grey seal in December/January it may cause mother animals to flee and to abandon their young, Lienau added.

Controlled detonations can rupture the lungs and eardrums of seals within a radius of up to four kilometers. Even at a distance of 10 kilometers explosions can damage sea mammals' ears.

Offshore wind farms are expected to provide a considerable percentage of the renewable energy in Germany within the next two decades. As other countries move their energy production out to sea, they are likely to encounter similar problems. 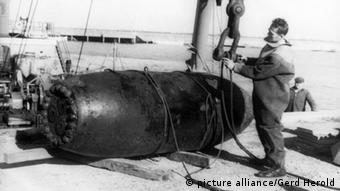 Deactivating of WWII bombs has been going on for decades

A coalition of German environmental organizations including the Naturschutzbund Deutschland (NABU) have issued demands for legal guidelines to deal with underwater ammunition dumps.

Currently there are no official guidelines when it comes to controlled explosions. Ordnance disposal specialist Kölbel agreed such guidelines would be helpful.

"At present we do not have any general rules of that kind," he said. "We are working in a very closed sensitive environment.

"To blow up a sea mine in situ is very difficult for us as we have to check before what animals are in the area, how we can protect these areas against the detonation," he added.

German wind energy is booming after the government decided to phase out nuclear energy in favor of renewable energies. Despite strong growth in 2012, turbine manufacturers expect stiff headwinds from Asia. (01.08.2012)

Germany is like a barrel of gunpowder. Nearly 70 years after the end of World War II there are still tens of thousands of unexploded bombs hidden under the earth. They could go off at any time. (31.08.2012)