Scotland opts for wind and wave power | Environment | All topics from climate change to conservation | DW | 19.11.2012

The sparsely populated region of Caithness in northern Scotland once prospered thanks to a nuclear energy test facility. Now wind and wave energy are set to take over. 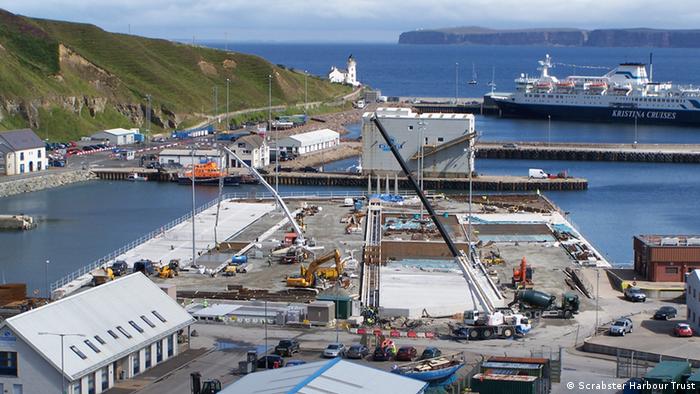 A ferry has docked at the pier in Scrabster, the northernmost harbour on the British mainland. It takes just 90 minutes to get from here to the Scottish archipelago of Orkney when the weather is good. The sea in between is called the Pentland Firth, one of the world's wildest stretches of water. It's known for its high winds and strong currents. But, it is these elements that could secure the future of the region, in the form of renewable energy.

Thirteen kilometers (eight miles) along the coast, a white dome rises up behind a high-security fence. Dounreay, more than 800 kilometers (500 miles) north of London, was chosen as the site for a nuclear facility back in 1955. While protesters in the cities warned of the risks, a lot of people up here were grateful for thousands of new jobs and the investment that came with the project. Fishermen sold their boats and took jobs at the new plant.

Now the whole region here, Caithness, is about to enter a new era. Dounreay is to be completely decommissioned by 2023. More than 2,000 jobs will be lost. This, in an area with a population of just 26,000. "One job in three is dependent on Dounreay in one way or another", says Trudy Morris, Chief executive of the Caithness Chamber of Commerce. 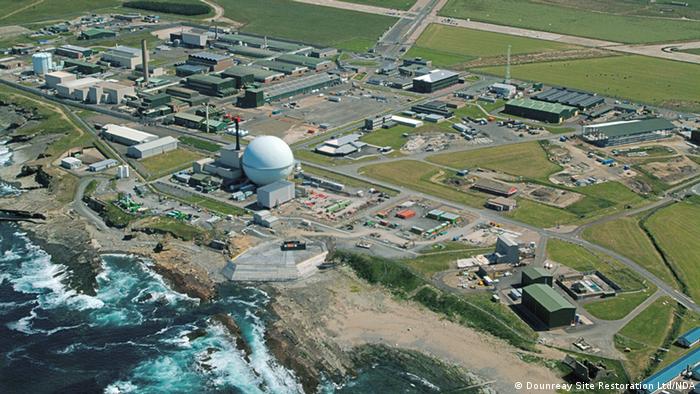 Dounreay reactor in northern Scotland is being decommissioned

The decision to decommission Dounreay was made back in 1994. At the end of last year, the final contract to close down the nuclear site was awarded to the Dounreay Partnership, a joint venture by the British company Babcock and the US firms CH2M Hill and URS.

Charles McVay is the senior manager responsible for disposing of waste from the Scottish site. He has been up here in the far north of Scotland since December 2011. He faces a daunting task. "Our current schedule is to reach the interim end state by 2023. That means all the buildings will be gone, the soil remediated where necessary, the waste stored", McVay told DW.

The US expert is confident the work will be completed in time to meet the deadline. But as well as the huge challenge of dealing with highly toxic radioactive material without harm to humans or the environment, McVay has another more immediate problem.

"Because we have such a highly skilled work force, lots of industries are very interested in Dounreay staff, especially the North Sea oil sector. So we have to ensure that we maintain an attractive work environment versus some of our competitors", McVay explains. "We’re going to put in place a retention programme to encourage folk to keep working at Dounreay during the period of decommissioning."

Making sure the highly qualified work force has prospects to stay in the region after the closure of Dounreay also is a priority for Roy Kirk. He heads the Caithness section of Highlands and Islands Enterprise, the public agency responsible for developing the region.

Kirk sees the wind parks being set up off the coast as a key source of employment for the coming years. At the same time, on the other side of the Pentland Firth in Orkney, marine energy is being tested and perfected at EMEC, the European Marine Energies Centre. "Because of the progress made in Orkney, we are now ready to step into a commercial dimension of marine power ", says Kirk. 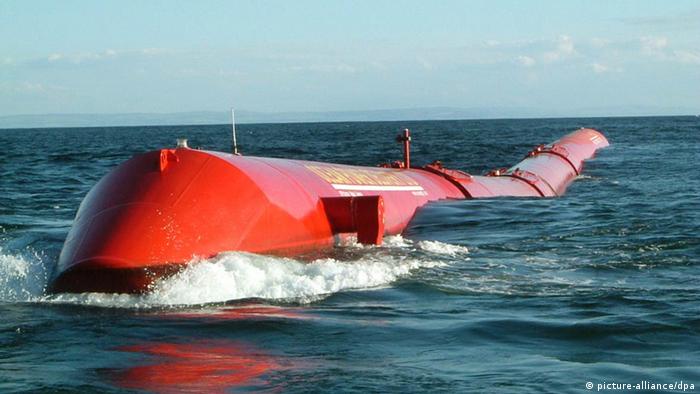 There are still 2,000 engineers, safety experts, managers and other skilled people working for Dounreay at the moment. Kirk is convinced their qualifications are directly transferable to marine energy.

Highlands and Islands Enterprise is working with the local chamber of commerce to make sure as many of them as possible stay here to help transform the region into a center for the offshore renewables sector. Caithness Chamber of Commerce head Trudy Morris, secured funding from the Scottish government, the European Social Fund, the Nuclear Decomissioning Authority and Dounreay to make the transition work.

A leap of faith

Scrabster harbour is gearing up for the green energy revolution. 19 million British pounds (23 million euro) have been invested in refurbishing the port to cope with the transport of large, bulky, heavy marine devices.

As part of the project 1,500 square meters (16,000 square feet) of pier will be extended to 11,000 square meters (120,000 square feet), according Sandy Mackie, the port manager for Scrabster Harbour Trust. "Just one marine energy device can take up a whole area of pier. We also had dredging done, to ensure access and water depth at all states of the tide, and heavy lifting equipment put in." 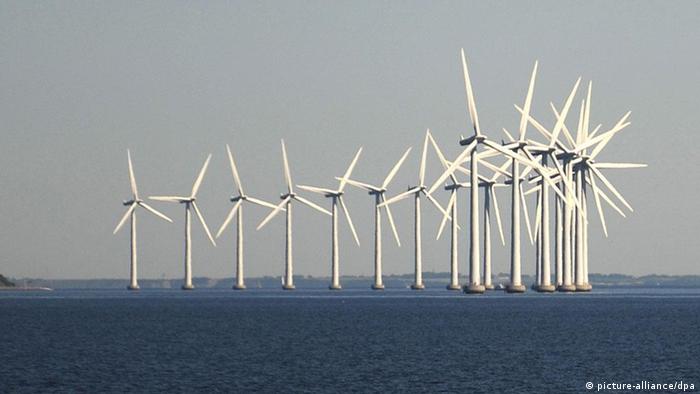 The Trust wants Scrabster to be involved in the new industry from the very start and become a centre for repair and maintenance. But preparing for an industry that is not yet in operation involves a "leap of faith", says Mackie.

The Scottish government wants to have 1.6 gigawatts of marine energy coming out of the Pentland Firth in coming decades. "If you translate that into actual devices, we would have a massive volume of activity, which all the ports in the area will struggle to cope with". But that is a problem Mackie is happy to face, he says.

The companies reliant on business with Dounreay are already feeling the effects of the gradual shutting down of the facility. Will Campbell is the Director of JGC Engineering and Technical Services. "We were probably 85 percent dependent on Dounreay five years ago. When that dried up, we found we can do work elsewhere. The skills are transferable," Campbell told DW.

But, will the renewables industry provide enough business to replace what the engineering firm has lost? "Technically, it should be a lot more," says Campbell. "But when will it happen? Marine energy is still a bit off from having commercial plants in the water. But you have to be upbeat, don't you?" 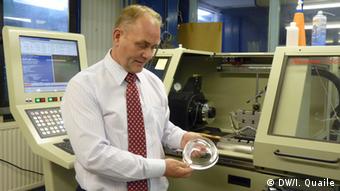 Bill Baxter is another local businessman hoping to benefit from the wave of green energy. His factory, in the nearby town of Wick, manufactures underwater cameras for the Norwegian company Kongsberg Maritime. Although the basic engineering is the same, cameras for marine energy applications have to be suitable for shallow water, says Baxter. "The seals work better in deeper water, when they are pressurized. Another problem is bio-fouling. In shallow water with ambient light, lots of little crustaceans like to latch on to the camera."

Monitoring the interaction between the marine environment and equipment installed for marine energy has become another economic factor in Caithness. In 2000, the University of the Highlands and Islands opened the Environment Research Institute in the town of Thurso.

Research Fellow Dr. Angus Jackson looks into how new structures in the water attract algae or crustaceans, which in turn can affect the performance of the wave converters or turbines. Invasive species can also drive out indigenous marine organisms, he says. 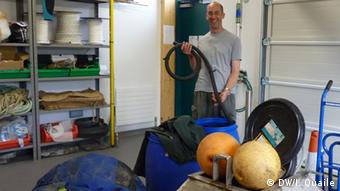 Dr. Angus Jackson says the political will for renewable energies in Scotland is considerable

Caithness is under pressure to find out about these impacts as quickly as possible. After all, the first wave devices are already producing electricity at the EMEC sites off Orkney.

"The political agenda for developing these energies is very strong and the will to do it in Scotland is probably better than anywhere else in the world" says Jackson.

Still, the researcher says that the project will be a real challenge, both for the developers aiming at full-scale commercial development and for the researchers who have to provide the data on the time scale envisaged by the Scottish government. Together, they have to succeed, if Caithness is to become a world leader in the transition from traditional to renewable energy sources.

Wild, windy island weather may not be ideal for sunbathing, but it's perfect for electricity from the wind and waves. Scotland is taking a lead in transitioning to green energy, says Energy Minister Fergus Ewing. (24.09.2012)

Scotland surfs ahead on marine energy

The idea of harnessing the power of the waves to produce electricity is not new, but now this renewable energy source is finally making a breakthrough. Pioneers are feeding wave power into the grid off Scotland's coast. (24.09.2012)