Short-term contracts and working for free: Scientists in Germany speak out | Science | In-depth reporting on science and technology | DW | 29.06.2021

Short-term contracts and working for free: Scientists in Germany speak out

Scientists at German universities are speaking out against precarious working conditions. Job insecurity and a lack of support are also problems at universities in other EU countries and the UK. 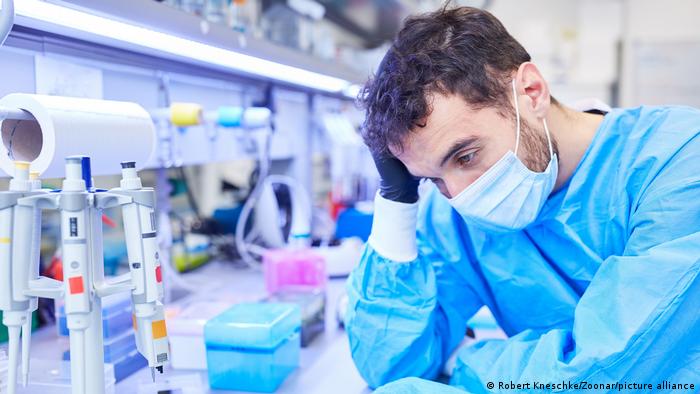 Since mid-June 2021, thousands of tweets tagged #IchbinHanna ("I am Hanna") from frustrated researchers in Germany have been doing the rounds on Twitter.

"Dear academia, it's time for a reset, enough of short-term contracts, exploitation & insecurity. Most bright ECRs [early career researchers] are forced to drop out of science. It's a vicious cycle & after 12 years you are finally 'officially' kicked out from the German education system. #IchBinHanna"

These tweets describe the careers and life experiences of scientists at German universities and research institutes.

Back-to-back fixed-term contracts, forced to move every few years to maintain a job, continuing research while on unemployment benefits after their contracts are up, and then, after 12 years on temporary contracts, banned from doing any more contract work at German universities under a legal framework that is supposedly in place to protect researchers.

That's the situation for researchers who can't find a permanent job in Germany — and such positions are rare. According to the German Federal Statistical Office, 87% of academics were employed on fixed-term contracts in 2019.

This sounds very familiar to me: I too used to want to be a scientist — a biologist to be exact. But after getting my master's degree, I decided to go into journalism instead (yet another profession with often precarious working conditions).

The industry's high competitiveness and the likelihood I would have to work many unpaid overtime hours and frequently need to move around didn't make scientific research a very appealing career choice for me.

A law that ‘backfired’

Several factors make insecure employment at German universities a common experience for many. One major factor is legal. A particular law introduced in 2007, called the "Wissenschaftszeitvertragsgesetz" (WissZeitVG for short), stipulates that "scientific and artistic staff" may work for a maximum of 12 years on fixed-term contracts at universities in Germany. 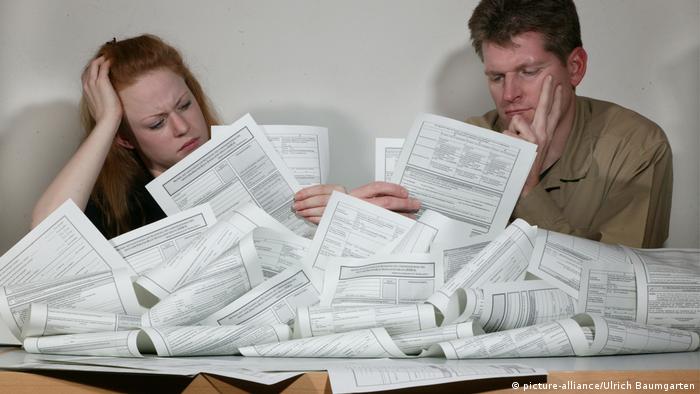 When project funds runs out, many scientist continue their research while on unemployment benefits

For many researchers, that means six years up until they have finished a PhD and six years afterwards. After that, researchers need to secure a permanent position if they want to keep working in academia.

The law was originally intended to put an end to endless fixed-term contracts in academia that prevented researchers from ever attaining secure, ongoing positions.

"But of course, that backfired," said Kristin Eichhorn a literary academic from the University of Paderborn in northwest Germany. "It has, on the contrary, led to people not being hired at all," she told DW.

Together with philosopher Amrei Bahr and historian Sebastian Kubon, the literary scholar launched the #IchbinHannah hashtag in mid-June in response to an explainer video by the German Federal Ministry of Education and Research.

In the animated video, which has since been taken down, a fictional PhD student, Hanna, is an example of how researchers can succeed in academia on fixed term contracts.

Thanks to the temporary nature of her employment, 'Hanna' can gain qualifications and experience at universities without staying there too long and "clogging up" the system, which could prevent budding new researchers from being hired.

This characterization of life in academia caused anger among scientists working in Germany who are struggling with fears about their insecure working conditions and a lack of future prospects.

"Today, researchers often don't know whether they will be able to stay in science permanently until their forties," said Kristin Eichhorn. Her current contract ends in September.

She still has until 2023, then her 12 years will be up. Actually, it would have ended in 2022, but researchers in Germany were granted an additional year because of the pandemic.

"Often, the only option is to become a professor. But the chances are not good. In some fields, there are 200 applications for one professorship," said Eichhorn. 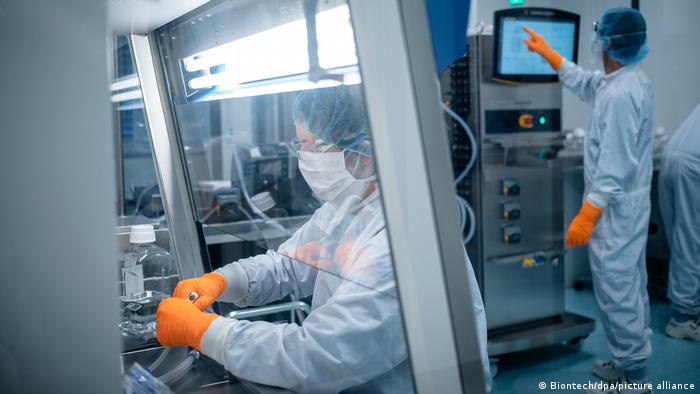 Academics who cannot find a permanent position have to leave German universities after 12 years of contract work.

I first became aware of how difficult it is to get a permanent position during my bachelor thesis year. At the time, my supervisor, evolutionary biologist Klaus Reinhardt, was looking for a job to follow his contract position, and he was somewhat frustrated.

Today he is a professor for applied zoology at the Technical University Dresden. But before he got the job, he had to bridge a year with unemployment benefits. "I still remember how the director here in Dresden wanted to see my last paycheck during the hiring process," Reinhardt told DW. "I was unemployed at the time, and I thought 'That's it now'."

Reinhardt got the job anyway, even though he says it's rare for professors to be hired when they are unemployed.

Do contracts ever make sense in academia?

According to the Federal Statistical Office in Germany, just over 400,000 people worked as "scientific and artistic staff" at German universities in 2019. About 180,000 of those were PhD candidates.

Although he struggled with the system himself, Reinhardt does not see fixed-term contracts in academia as a problem per se.

He thinks temporary contracts make sense during PhDs. After all, he said, not all doctoral students want to stay in research.

This is confirmed by the Federal Report on Young Academics 2021, published by the German government, according to which around 50% of doctoral students leave the university in the first year after their PhD. And up to 10 years post-doctorate, the unemployment rate is only 1 to 2%.

But those numbers don't take into account how many students leave academia because, like me, they were put off by the prospect of precarious working conditions and a lack of job security.

Before he got the job in Dresden, Reinhardt also worked in England at the University of Sheffield, where "the system is completely different," he said. "There, tuition fees are paid. If there is to be a new permanent position, they simply admit more students — by creating a new degree course, for example."

According to the UK's  Higher Education Staff Statistics, 50% of researchers in the UK had permanent positions in 2018/19.

But getting such a job is difficult there too, as Jacek*, who wants to remain anonymous, told me. He studied in Poland and did his PhD in the UK in 2012.

"At that time, I thought I had good chances in science. I had a PhD from a prestigious university, had been to many conferences, had quite a few publications already and was well connected in my field. I was sure I would find a job as a postdoc or lecturer. I was very naïve," he said. Despite numerous applications, it took more than a year before Jacek was offered a position to work on a project in the UK.

"The work was exciting and the colleagues were great, but the position was unpaid," he said. Out of desperation, he accepted anyway and financed himself by working other jobs on the side.

After many different jobs in different countries, hundreds of thousands of euros raised in external funding, three published books and more than 100 published articles, he is currently employed at a university in Scandinavia — on a temporary basis, of course.

"Cost-cutting measures now exist everywhere, really. But the upper limit for fixed-term contracts is specifically German. In other countries, researchers can work on a fixed-term basis until they retire. That's not nice, but at least they don't have to leave the system," said Eichhorn.

According to Eichhorn, the fundamental problem is the financing set up of universities. In Germany, where students don't pay tuition fees, most of the universities' money comes directly from the federal states.

But Eichhorn says only 50% of their costs are covered by this basic funding. The rest has to be raised through project-linked external funding. Researchers often have to apply for external funding themselves, competing with their colleagues for the available project funds. The positions that come with this funding are, of course, tied to projects with start and end dates — meaning they are temporary.

More funding from the government, less from outside?

Despite this, it's not as if Germany's budget for education is small — in 2019, the government's budget for universities was 19 billion euros. Its research and development budget is the fourth highest in the world.

However, in order to create more permanent positions, at least for ongoing roles like teaching, there needs to be significantly higher federal funding for universities, said Eichhorn.

It's unlikely that the working conditions for scientists in German universities will change quickly.

The minister responsible for the 12-year contract law recently defended it, saying in many cases fixed-term contracts make sense. Besides, she pointed out, the law does not prescribe temporary contracts — universities are free to offer permanent positions at any time. She did not explain where exactly the money for those long-term positions is to come from.

So maybe I had the right idea when I decided to go into science journalism after all — even though I still miss the lab sometimes.

*The interviewee's name has been changed to protect their privacy.

Russia is believed to have flared large amounts of gas near the Finnish border since July, releasing approximately 9,000 tonnes of CO2 per day. DW looks at the potential climate impact.