School Violence: ″We Need to Recognize the Risk Signals″ | Germany | News and in-depth reporting from Berlin and beyond | DW | 26.04.2007

School Violence: "We Need to Recognize the Risk Signals"

On the fifth anniversary of Germany's worst school massacre, DW-WORLD.DE spoke to Jens Hoffmann, a psychologist whose research focuses on the detection and prevention of mass killings in schools and businesses. 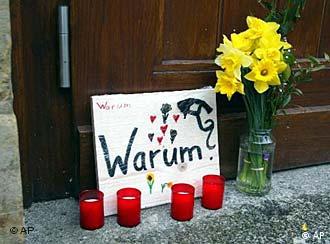 "Why?" read a sign outside the Erfurt school after the shooting in 2002

Five years ago in the eastern German town of Erfurt, 19-year-old Robert Steinhäuser went on a shooting rampage, killing 12 teachers, two students, a secretary and a policeman before turning the weapon on himself. The event sent shock waves through the country and sparked widespread soul-searching on topics from teenage alienation and violent video games through mass media and gun control. Just last year, another school shooting took place in Emsdetten in northern Germany, leaving 37 injured and the 18 year old gunman dead.

Jens Hoffmann is a psychologist whose project at the Technical University of Darmstadt – ironically, the German sister school of Virginia Tech University, which saw its own horrific killing spree on April 16 -- developed an early detection method to identify those at risk for mass violence. He teaches the method to law enforcement agencies, schools and businesses.

DW-WORLD.DE: Dr. Hoffmann, what does your project and method do?

Jens Hoffmann: After the school shooting in Erfurt in 2002, we began to wonder if anything could be done about it. We found that in the United States there was already quite a lot of research on early warning signals about these attackers. So we analyzed German cases and we found just about the same signals. They were almost identical.

After that, we developed instruments to analyze the communication of people who are estranged, and their other behaviors, and the best way to intervene.

Now we mostly offer two-day workshops for school psychologists, policemen, and people working in schools and companies. We teach them how to make risk assessments in their own organizations.

Briefly, what do you tell people to look out for?

First, something must have gone wrong for the attacker. He has a problem and he can't get over it. And he is very angry. They are always very depressive and very angry. 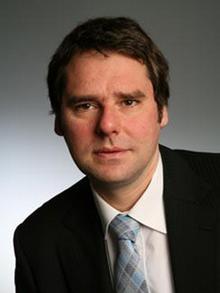 Then they start to think about a violent solution for their problem, so they talk about violent things. They do something we call "leaking," giving direct or indirect signals, like the plays the (Virginia Tech) attacker wrote before he attacked. People were aware that he wrote very violent things.

Then they start to prepare their attacks. They start to think, "When can I do it?" They talk more in detail about it. And then finally, they come out with a statement that something big is going to happen. If they have friends they tell them, "don't go to the high school on this day."

So we have quite a lot of signals, and the closer we come to the attack, the more sure we can be that this person may see a violent attack as an answer to his problem.

What should people do if they recognize a crisis?

People preparing for an attack like this might start giving away their possessions to friends; they engage in what we call "final act behavior." The school shooter last year in Emsdetten gave away his favorite gun to a friend.

Another late warning signal that shows a very high risk is that they might talk to friends or peers about attacks by other school shooters.

So it is important that if you are worried about someone, you have to ask the people around them if they have seen any of these signs. Like if they are desperate, and say they don't know how to go on.

It often seems clear in retrospect that someone was on the brink, but these events keep happening anyway. Why is that?

Well, many events have, actually, been stopped through prevention. In the United States there are very good programs. In the case of Virginia Tech, they just had bad luck, actually, that there wasn't a case manager there.

We need more ‘threat managers' in schools and organizations who can recognize the risk signals. They can say "there may be someone in crisis here." And if we understand that these people are in a crisis -- that's why they do these attacks, because they are in crisis -- the earlier on they get help, the less risk that something will happen.

The first thing a threat manager should do is talk to the person that people are worried about. And in most of the cases there is nothing behind it and everything is ok.

So you teach prevention?

Yes, its very much about behavior-based prevention. Not in the classical psychological way of looking at what are the people saying. Its much more hands on: What do we need to look at in an organization, what do people say or do that we should perhaps be worried about? What are the warning signals? What are people saying? Very often people who are desperate are more dangerous than people who are saying, ‘I'm going to kill someone.'

It is a new way of dealing with the field of threat assessment and threat management. We've learned a lot from our colleagues in the United States on this.

Trying to raise flags about killing sprees is quite a gruesome topic. How has your work been received in Germany? 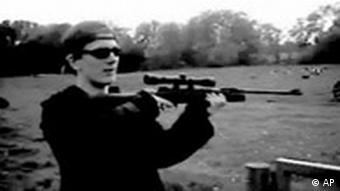 Right after Erfurt, in 2002, no one was interested. We had to fund the programs with our own money. But then there was Emsdetten and that lead to huge interest.

Nobody thinks this is actually going to happen where they live. And before, nobody believed our message: that there are always warning signals, and that these can be detected. But this has changed now.

What would it take to make these detection methods widespread?

People just need to be taught about the risk models, about the dynamics behind that. They don't need to be psychologists. You need to train people to know what to look for – just one, two, or three people in an organization, who could turn around and train the other people.

The most important thing is that such a program be supported from the top. Because you have to have the structure, the people have to have some time to make the effort. Interestingly, because of the events at its partner school Virginia Tech, the TU Darmstadt is putting this kind of training program into place.

How big a role does the media play in causing events like Erfurt?

The terrible thing is, this is a new form of violence, due to the fact of the media and the Internet. It's a new way for desperate, mostly young men -- only 4 percent have been women -- to "be someone." They feel lost, they feel people have behaved unfairly to them, and they need some form of revenge to show that they are someone. This is quite new.

They always look at Columbine. Almost every school shooter saw Columbine as some sort of blueprint. They read about it, and they identified with the Columbine killers.

And the newest terrible thing is to leave some sort of final message. The school shooter in Emsdetten did it, too. They put it into the Internet, send it out to the media, and they can fantasize before they are dead that afterward, everyone will hear them, everyone will see them.

The US made a horrible mistake when it published the videos of the Virginia school shooter. It's the worst thing they could have done. Now there is a higher likelihood of a copycat crime.

We tend to think of Erfurt-type school shootings as a modern phenomenon. Yet I've seen references to killing sprees going back to the 1920s. Is this really an age-old issue?

Well, the earlier cases were people from outside who attacked the schools. Before the middle of the 1990s, there were almost no school-shooter cases like those we know today, with young killers who are in school, or were in the school. Around 1992 or 1995, you begin to have a terrible new dimension of this sort of crime. 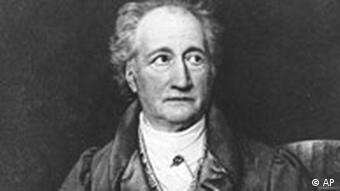 We know from earlier psychological research that there is something called the "Werther Effect," named after the Goethe book (The Sorrows of Young Werther, about a romantic character who shot himself in the head, published in 1774 – eds.) Even back then there were a series of copycat suicides, where young men would be found shot, dressed like Werther, or they were found dead with the book next to them. So the mass-media effect is an old one, it probably dates back to the first printed books.

But what is new is that in every room, there is now Internet access. You can get lots and lots of information. You have video sequences, you can see the attack on Columbine, you know a lot about these attackers.

And the newest dimension is that you can make your final statement to the world. Its amazing: The school shooter in Emsdetten gave a speech in English, even though he was a German, because he said "I want to know that the whole world hears my story."

So yes, we have a new dimension because of mass media, and because of a long tradition that began 200 years earlier. But there is a new quality to it.

Why do you think schools are so often the focal point of these shootings? Why not other public places -- restaurants or theaters?

Schools, courthouses, they are common targets. These are organizations that have a big influence on other people. If you have a problem in school or in court, or your workplace… it has a huge influence on your life. It is very much about identity, which may be at risk. What you find especially with people who are very desperate, who don't know how to cope with things and feel angry, is that they feel unfairly treated.

In fact a big aspect of prevention may be to focus on making sure people are dealt with fairly. What we found in many of the incidents is that the shooters were, actually, treated unjustly. In Erfurt, (the shooter Robert) Steinhäuser had to leave school in the 12th grade. And he was kicked out for quite a minor infraction. At this point, he had nothing to do; he was totally lost. In Emsdetten, the shooter was treated unfairly by his peers.

Making procedures to deal with these could be a big step toward toward prevention.

The shock of the Virginia shooting massacre is being echoed in the eastern German city of Erfurt, where there were calls for tighter gun control laws after a student shot dead 16 people at his high school five years ago. (18.04.2007)

Hysteria hit high schools across Germany this week as police struggle to deal with a wave of threatened copycat crimes triggered by a student's storming of his school in late November. Is the country overreacting? (08.12.2006)

Discussion on Violent Computer Games after School Shooting in Germany

Following Monday’s school shooting in the German town of Emsdetten, in which a masked teenager injured almost 40 people, social scientists and politicians are mulling over ways of avoiding such a disaster in the future. (21.11.2006)