Schleswig-Holstein: Casting ballots between the North Sea and the Baltic | Germany| News and in-depth reporting from Berlin and beyond | DW | 06.05.2017

Schleswig-Holstein: Casting ballots between the North Sea and the Baltic

On Sunday, two million voters head to the polls in Schleswig-Holstein, Germany's northernmost state. Observers in Berlin will be watching closely for trends relevant to September's federal elections. 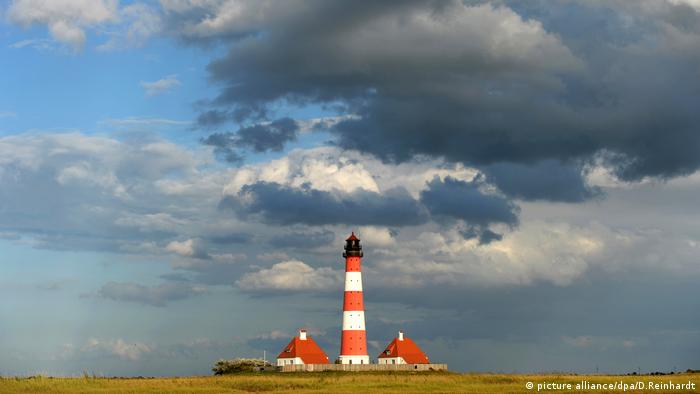 One would think that Torsten Albig could just sit back and relax. For the longest time it appeared as if the 53-year-old Social Democrat (SPD) state premier was headed for yet another electoral victory. His three-way coalition with the Greens and the Southern Schleswig Voters' Association (SSW), which represents the state's Danish minority, has governed quietly and scandal-free since 2012.

Yet, over the last few weeks that certainty has vanished. First, there was a televised debate in which the Christian Democrat's (CDU) top candidate, Daniel Günther, generally considered rather bland, did surprisingly well against Albig.

Then, in an interview with the German tabloid magazine "Bunte," Albig talked very frankly about the end of his marriage and his new wedding plans: "I was always away for work, and my wife was stuck being a mother and managing the household," he said. He then went on to say that at a certain point he could barely speak with her on an equal footing. Such statements led many to see an outmoded image of female identity in the premier's comments.

And finally, SPD federal chairman and candidate for the chancellorship, Martin Schulz, publicly distanced himself from Albig on the issue of deporting Afghans. The state premier is strictly opposed to any deportations, even when Afghans have no right to asylum; he is thus at loggerheads with the national party. 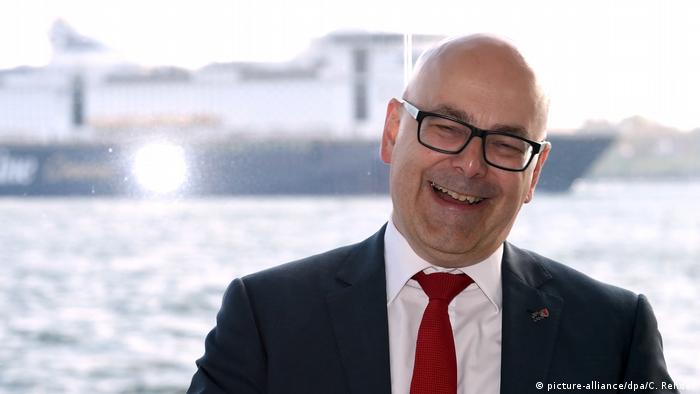 At the moment, opinion polls look quite different than they did at the beginning of the year: The CDU has now surpassed the SPD as the state's most popular party. Five years ago, state elections ended in a draw. Albig sees a certain tradition in the trend: He recently told Reuters TV that Schleswig-Holstein is "a tight state," going on to explain that people who believed the SPD should be 10 points ahead of the CDU simply don't know it.

Schleswig-Holstein is quite peculiar when it comes to Germany's smaller political parties as well, and it is therefore interesting to see how these will fare up north. The Green Party, for instance, is still doing quite well in the state, unlike the downward trend the party is experiencing on the national level. Schleswig-Holstein's Greens can count on picking up some 12 percent of the vote, more than twice that which the national party looks set to take. The main reason for that trend is the party's popular and pragmatic state chairman, Robert Habeck. The popularity of the FDP (Free Democratic Party), which is expected to win double-digit approval, also has a lot to do with its state leader, Wolfgang Kubicki. And then there is the anomaly of the Southern Schleswig Voters' Association. As a minority representative party it is exempted from having to clear the 5 percent hurdle to win seats in the state parliament, and has therefore often played a role as a decisive partner in a number of different coalitions throughout the state's history. 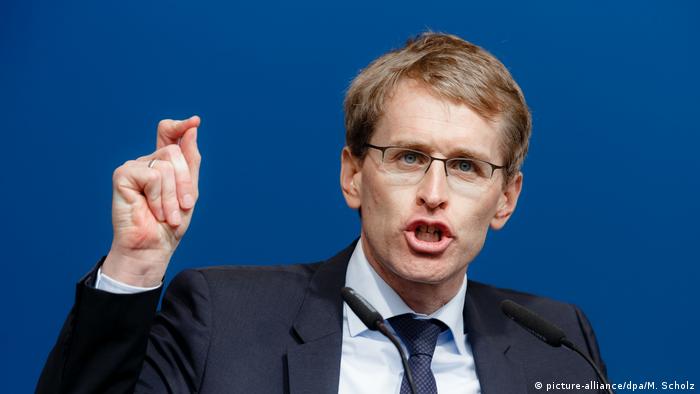 CDU challenger Daniel Günther has gathered momentum over the campaign

The whole of Germany is also watching to see how the AfD (Alternative for Germany) performs in Schleswig-Holstein. For several months now, the right-wing populist party has entered one state parliament after another, even winning 20 percent or more of the vote in Germany's eastern states. But lately the party has been losing momentum, and it could likely stumble at the 5 percent hurdle in Schleswig-Holstein. But it should also be said that the AfD was never as popular here as in other states.

The Left party has also had difficulties establishing itself in structurally conservative and predominantly rural Schleswig-Holstein. The party has increased its popularity since the last election, yet it is still unclear if it will win seats in Kiel's state parliament. It seems a foregone conclusion that the Pirate party, which won 8 percent of the vote in 2012 and currently holds seats in the state parliament, will be voted out on Sunday. 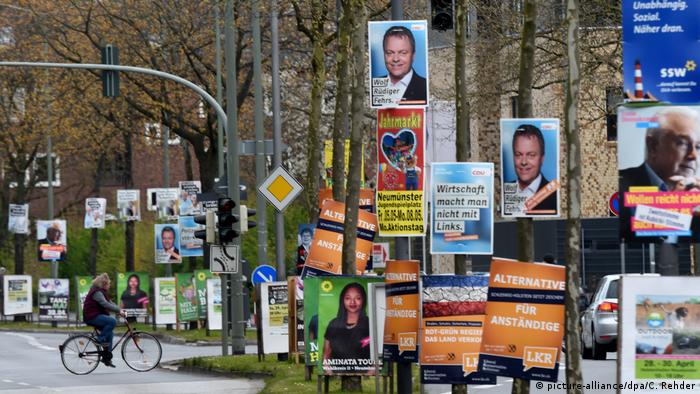 Residents of Schleswig-Holstein have a wide choice of candidates

What happened to the 'Schulz effect'?

The campaign itself never turned into a heated debate, nor did it produce any political mudslinging. That may have to do with the reserved character of northern German voters, or perhaps with the even-temperedness of the election's two main candidates. Their themes: CDU candidate Günther wants to return to the previous G9 educational system - which is one year longer than the current 12-year (G8) system -, is calling for bigger gaps between new wind generators and houses, and is for a rapid expansion of the A20 freeway.

SPD candidate Albig is promising to provide free daycare for children, more social equality and to continue governing with his current coalition partners, what he calls his "Plan A." He declined to say what his "Plan B" is. Beyond an SPD or CDU-led "grand coalition," a number of smaller three-way coalitions are conceivable in Schleswig-Holstein.

But the tepidness of election campaign does not necessarily mean there will be voter apathy come Sunday. Thorsten Faas, a political scientist at the University of Mainz, says that the refugee crisis and the French presidential elections have gotten people's attention: "The times have become more political, and the alternatives more pronounced." Citizens have again begun to understand "that elections do matter." That is also why he expects voter participation to surpass the 60 percent mark of Schleswig-Holstein's last election. In this cycle, sixteen-year-olds will be allowed to vote for the first time as well. 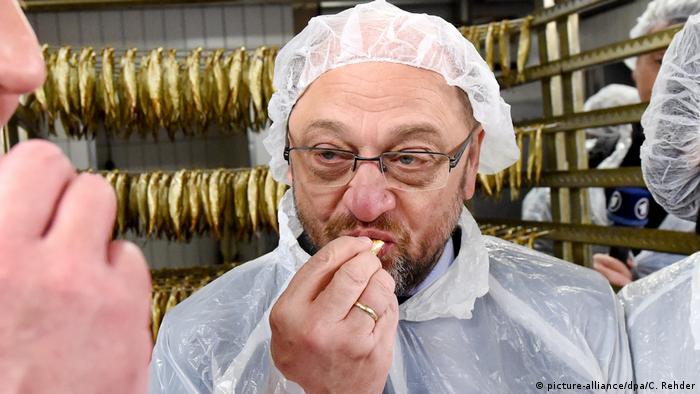 Will Martin Schulz eating the famed Kiel smoked fish during the campaign help the SPD cause?

As with every state election, politicians and political analysts are asking what Sunday's results - just months ahead of federal elections - will mean for national politics. More than most, Martin Schulz will likely be asking that question with a certain amount of trepidation. For there is little if nothing left of the so-called "Schulz effect" that exploded when he was named the SPD candidate for the chancellorship earlier this year. The effect already seemed to have expired by March, when state elections were held in the state of Saarland. At the time, the SPD claimed the CDU won the election due to the popularity of incumbent state premier Annegret Kramp-Karrenbauer.

Should Torsten Albig fail to capitalize on the advantage of his own incumbency, it would be the second straight defeat for the SPD under Schulz. Another election, one that is exceedingly more important to federal politics than Schleswig-Holstein, will take place in North Rhine-Westphalia next Sunday. Germany's most populous state, North-Rhine Westphalia has almost six times as many residents as Schleswig-Holstein. Like the less-populous state between the North and Baltic Seas, opinion polls suggest a neck-and-neck race between North Rhine-Westphalia's SPD-led state government and its CDU-led opposition. Thus, North Rhine-Westphalia will be the final and perhaps most decisive barometer for this fall's federal elections.