Preliminary official results show Chancellor Angela Merkel's CDU ahead with a clear lead over the Social Democrats. The vote has been seen as a test of the mood in the country ahead of federal elections in the fall. 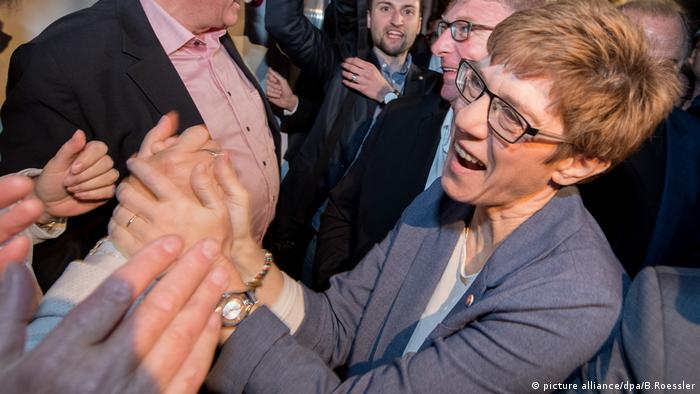 Germany's "super election year" kicked off on Sunday, with some 800,000 eligible voters casting ballots for the state parliament in Saarland. Sunday's vote marked the first in a series of key state elections leading up to the federal parliamentary elections slated for September.

Preliminary official figures place German Chancellor Angela Merkel's Christian Democratic Union (CDU) ahead of the competition with 40.7 percent of the vote, up from 35.2 percent in the 2012 elections.

Support for the Social Democrats (SPD) slipped, with the center-left party garnering 29.6 percent, down from 30.6 percent in 2012. SPD party leader Martin Schulz explained his party's failure to boost support in Saarland by saying: "Receiving a goal does not mean the match it is over."

The Left party was set to take 12.9 percent, Alternative for Germany (AfD) 6.2 percent and the Greens 4.5 percent of the votes, with the latter effectively falling short of the 5 percent threshold to gain seats in the new parliament.

"This result is a clear rejection of red-red-green," he added, referring to the pre-election prospect of a left-of-center alliance comprising the SPD, the Left party and the Greens. The preliminary results put the CDU on track for 24 seats in the state's parliament, the SPD 17, the Left seven and the AfD three.

The outcome of the vote in one of Germany's smallest states has been viewed as a sign of voter sentiment ahead of state elections in Schleswig-Holstein and North Rhine-Westphalia in May, and federal elections in September.

The CDU has ruled the southwestern state for the past 18 years, but the conservative state premier Annegret Kramp-Karrenbauer (pictured above) faced a potential upset from the center-left SPD led by Anke Rehlinger, the state's deputy premier and minister for economic affairs.

The SPD's popularity has surged in recent months on the so-called "Schulz effect," a reference to the new party leader and candidate for chancellor. However, it failed to translate into votes in Saarland. The CDU and SPD are in a "grand coalition" in Saarland, just as Chancellor Angela Merkel's conservatives and the SPD are at the national level. Another CDU-SPD coalition in the state is possible

The AfD siphoned off support from all mainstream parties before retreating slightly in nationwide polls in recent months.

The populist, right-wing party looks to have cleared the 5 percent electoral threshold by about one point in Saarland. That puts the AfD in its 11th state parliament - out of a total of 16 federal states in Germany.