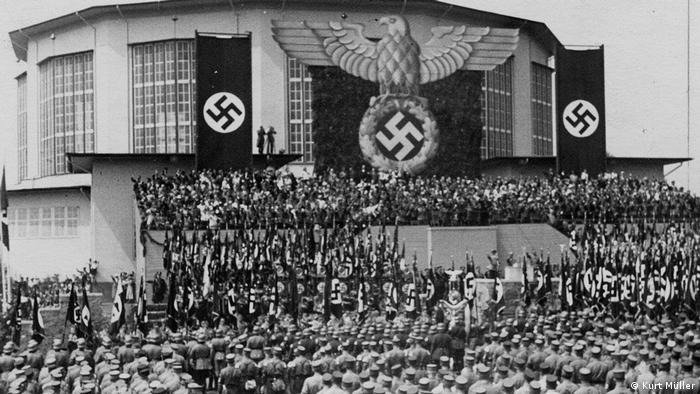 The exhibition hall on Wildenbruchplatz, from where 500 Jews were deported by the Nazis

"We always believed that the next day wouldn't come for us," said Rolf Abrahamson, recalling his deportation by the Nazis from the city of Gelsenkirchen in western Germany to various labor and concentration camps.

Abrahamson, who was just 16 years old at the time, only narrowly survived. The now 96-year-old wasn't speaking inside the New Synagogue in Gelsenkirchen. Instead, reporters heard a recording of his voice. However, this did nothing to diminish the intensity of his words.

The fact that Abrahamson's voice could be heard at all in the synagogue on this day in early November is thanks to the work of a very special project.

Fans of second division football club Schalke 04, the Schalke Fan Project and employees of the club itself, in cooperation with historians from the Institute for Gelsenkirchen City History (ISG) and the local Jewish community, have spent the past few months searching for evidence of the largest deportation of Gelsenkirchen Jews at the beginning of 1942. 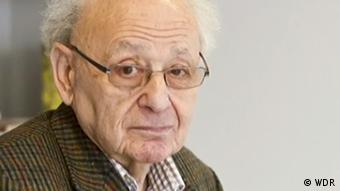 Rolf Abrahamson was just 16 at the time of his deportation

The project, called "Errinerungsort Wildenbruchplatz" (Wildenbruchplatz place of remembrance) is very much in the tradition of Schalke, which in 1994 became the first Bundesliga club to include a pledge to fight against racism and discrimination in its statutes.

A place to focus on

At the center of the research is the Wildenbruchplatz: a once bustling, central city square from which 350 Jews from Gelsenkirchen and 150 from other cities in the surrounding Ruhr region were deported to Riga, modern day Lativa, on January 27, 1942.

On a night that saw the mercury plunge to –27 Celcius (-17 Fahrenheit) they were jammed into a hall and penned in by barbed wire, as they awaited their forced deportation to the place where the Nazis would begin to murder them upon their arrival.

"It is sometimes difficult to find a way to find an entry point into this subject. But here we have a concrete place that you can focus on," 25-year-old Schalke supporter Jannik Rituper told DW.

Like many of his fellow campaigners, Rituper has been devoting at least six hours per week to the project over the past six months. It was a portion of his interview with Abrahamson that was played to reporters in the synagogue.

"I'm incredibly happy with the result," Rituper said. "We came up with questions that had never been asked before." 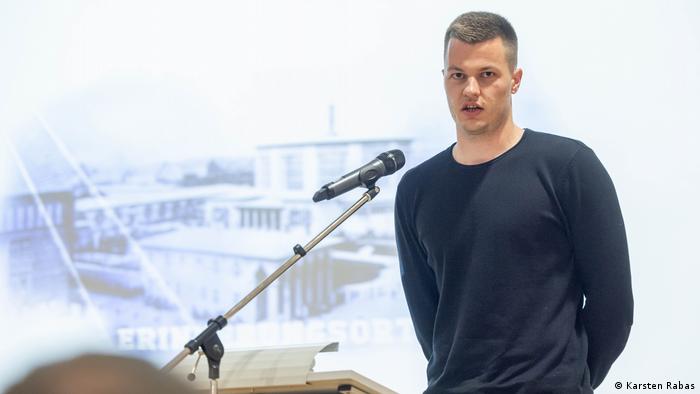 Jannik Rituper: "Questions that had never been asked before"

The project, which came together spontaneously after a 2018 trip to the Auschwitz-Birkenau concentration camp organized by the Schalke Fan Project, has around 25 members.

Stories of victims and perpetrators

The group's research, conducted in numerous municipal, state and federal archives, has brought to light the fates of many Jews from Gelsenkirchen and nearby towns, putting names to unspeakable stories.

One example is Helene Lewek, who took her own life shortly before she was to be deported. The Wildenbruchplatz in Gelsenkirchen is symbolic of so many places in Germany and Europe where the Nazis committed their atrocities.

The group's research has also revealed some of the perpetrators' stories: Like that of Hauptsturmführer and Gestapo field office director Robert Schlüter and his postwar excuses, denials and delusions. And how a court acquitted this perpetrator and unscrupulous careerist.

Schalke supporter Natalie van den Meulenhof said her reason for committing to the project is to make sure the atrocities of the Nazis cannot be forgotten. The 30-year-old civil servant hopes that "through educational work, anti-Semitism can be contained and combatted."

Thomas Schaal, a 52-year-old football coach from Berlin who frequently commutes between Gelsenkirchen and the German capital for the project, also has a clear motivation for his involvement. 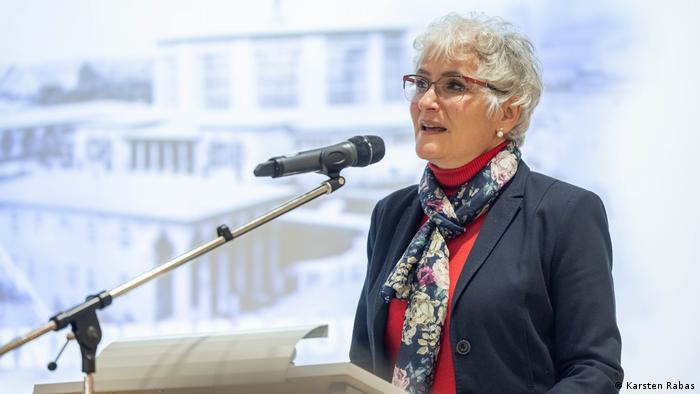 Anti-Semitism on the rise

The memory of the Nazi terror must be kept alive, agreed Judith Neuwald-Tasbach. The chairwoman of the Gelsenkirchen Jewish Community lost 24 family members in Riga; only her father and uncle survived the deportation.

"Anti-Semitism has become very bad again," Neuwald-Tasbach told DW, adding that this makes the project by Schalke fans all the more significant.

On January 27, 2022, 80 years to the day after the deportation of Jews from the Wildenbruchplatz, members of the project group plan to unveil a memorial plaque at the site. But all those involved agree that this will be far from the end of their work, which must and will continue.