Schalke relegated from the Bundesliga: The inside story of a Royal Case of the Blues | Sports | German football and major international sports news | DW | 21.04.2021

Schalke relegated from the Bundesliga: The inside story of a Royal Case of the Blues

Schalke have been relegated from the Bundesliga. Their fate was sealed in Bielefeld but has been long in the making. It's a story of sporting failure, mismanagement, pandemic-related scandal and the power of one man. 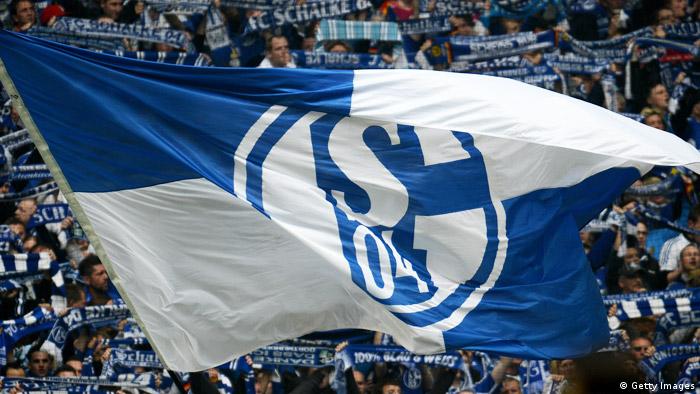 With over 160,000 members, Schalke 04 are the second-biggest football club in Germany, seven times German champions and one of the biggest names in world football.

As recently as 2018, they were Bundesliga runners-up. In 2011, they reached the semifinals of the Champions League. Schalke's youth academy, the famed Knappenschmiede, has produced such talents as Manuel Neuer, Leroy Sané, Julian Draxler, Mesut Özil and Leon Goretzka.

But now, for the first time in 33 years, the Königsblauen (Royal Blues) have been relegated to the second division.

The final nail in the coffin came with defeat away at Arminia Bielefeld on Tuesday night, a result which merely confirmed the inevitable. In 15 miserable months, going all the way back to January 2020, Schalke have won just two Bundesliga matches. Earlier this season, they came within 90 minutes of equalling Tasmania Berlin's record 31-game winless streak from the 1965-66 season.

They were spared that ignominy thanks to a 4-0 win over Hoffenheim. It remained one of only two wins so far in a season in which Schalke have lost 21 games, conceded 76 goals and scored only 18. They're down with four games still to play.

And yet that's only the tip of the iceberg. The road to relegation is longer than the Schalker Meile, the iconic street that leads from the center of Gelsenkirchen in western Germany, through the working-class district of Schalke, to the club's 62,000-capacity Veltins Arena, a modern, spaceship-like structure that shares the Ruhrpott skyline with the headframes of closed mine pits.

It's a journey which has left Schalke with €217 million ($257.8 million) of debt, an inexperienced coach, a squad unfit for the second division, a supervisory board divided in acrimony, a thoroughly disillusioned fanbase and a list of intrigues to rival any Netflix drama.

Thirty kilometers east of Gelsenkirchen in a city known to Schalke fans only as "Lüdenscheid North," Borussia Dortmund supporters have a song about their local rivals from "Herne West." It's called "Am Tag als der FC Schalke starb" or "On the day that FC Schalke died."

There are several candidates for that precise day in Schalke's recent history, not least Tuesday night, when rival fans set off celebratory fireworks across the city and footage emerged allegedly showing Schalke fans chasing their own players upon their return from Bielefeld.

But, for Kornelia Toporzysek, a lifelong Schalke supporter, lawyer and former member of the club's honorary board, it was August 7, 2019, the day on which her fellow board members acquitted Clemens Tönnies of racism.

Earlier that week, Tönnies, Schalke's de facto club boss since 2001, had spoken at a business conference in nearby Paderborn, where he had advocated for the construction of power plants in Africa so that, when provided with electricity, "[Africans] will stop producing children as soon as it gets dark."

Tönnies apologized but, despite calls from Schalke fans for him to resign, the honorary board, a form of internal club ethics commission, allowed him to temporarily step down from his position for three months of his own accord. Toporzysek resigned in protest.

"For me, that was the turning point," she tells DW. "That was the moment when Herr Tönnies placed his own interests and his own reputation above the club. He didn't want to be cast as a racist and the club succumbed to his demands in order to appease him."

The club's handling of the whole affair was symptomatic of what Toporzysek calls the "Tönnies System," in which Schalke's entire club structures were tailored to suit one man, the background against which Schalke's dramatic collapse and relegation has played out. 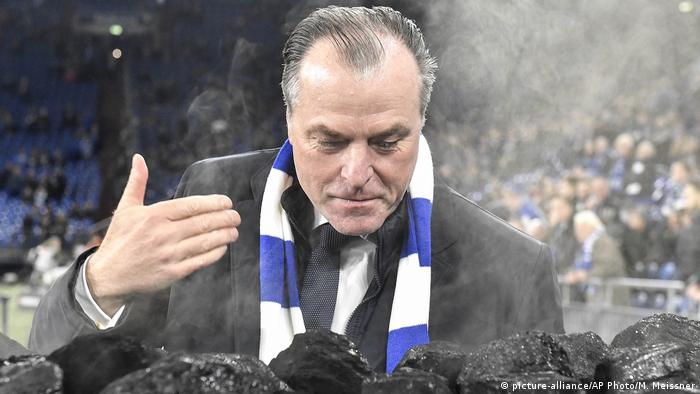 "Alpha alpha": Clemens Tönnies pulled the strings at Schalke for over 20 years

For over two decades, Schalke 04 has been synonymous with the name of Clemens Tönnies. A local billionaire who made his estimated €1.4 billion fortune in Germany's meat processing industry, Tönnies, 64, joined Schalke's supervisory board in 1994 and became its chairman in 2001.

Under his stewardship, Schalke established themselves as one of the top clubs in Germany and Europe, finishing Bundesliga runners-up four times, winning three German Cups, reaching the Champions League quarterfinals in 2008 and the semi-finals in 2011.

Crucially, it was Tönnies' extensive business network that brought about Schalke's lucrative sponsorship deal with Gazprom, the Russian gas company whose name has adorned the club's royal blue shirts since January 2007, while he was also a driving force behind the development of Schalke's new Berger Feld academy and training facilities.

"Of course, Tönnies has done a lot for the club; he's not the devil incarnate," says Toporzysek. "Tönnies is a leader, he's alpha alpha, a proper businessman who leads and decides."

Another club source adds: "He appears friendly and approachable, it's not like you can't talk to him. He's the sort of person who'd turn up at a village festival and have a beer with everyone."

But, simultaneously, another picture emerges. "Everyone at Schalke knows that there was just one powerful man and that was Clemens Tönnies," says Toporzysek, describing structures at the club as "patriarchal" and "autocratic."

"Tönnies filled key positions with people whose loyalty was as much to him as it was to the club," she says.

Another source agrees: "Everyone who gets close to him does so subserviently. Everyone is dependent on him. He's Clemens Tönnies, the rich man who is always right and won't be told 'no.'"

Uwe Kemmer, a supervisory board member for nine years until December 2020, also confirms: "Clemens Tönnies is alpha alpha. There was a very distinct loyalty towards him."

But he insists: "It's not as if we all sat there and did as we were told. We had our disagreements. I wouldn't suppress my opinion on Schalke just because Clemens Tönnies thought differently." 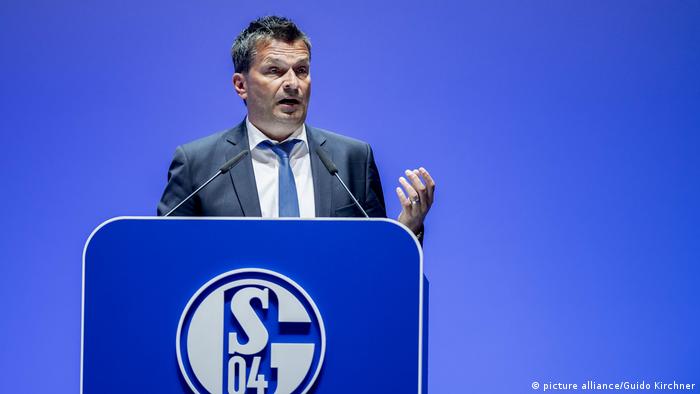 Paradigm shift: Christian Heidel hoped to usher in a new era at Schalke

Christian Heidel and the 'paradigm shift'

But Tönnies wanted more. The odd Champions League qualification was no longer enough, nor was simply paying off debt. Schalke had enviously watched Jürgen Klopp's success in neighboring Dortmund, but sporting director Horst Heldt had been continually frustrated in his own attempts to lure the young Thomas Tuchel from Mainz.

It was time for a restart, or what one club source in hindsight calls a "paradigm shift." To great fanfare, Heldt was replaced by the charismatic Christian Heidel from Mainz, who installed Markus Weinzierl, previously of Augsburg, as head coach.

Over the next two-and-a-half years, Heidel would sign off on four of Schalke's five most expensive ever signings, namely Breel Embolo (€26.5 million from Basel), Nabil Bentaleb (€19 million from Tottenham), Sebastian Rudy (€16 million from Bayern Munich) and Yevhen Konoplyanka (€12.5 million from Sevilla), while allowing Eric Maxim Choupo-Moting, Sead Kolasinac, Max Meyer and Goretzka to leave on free transfers.

"We burnt through money under Heidel," recalls Kemmer. "You need to make sporting decisions together as a team, in conjunction with the coach, but Heidel wanted to do everything on his own. He burnt over €150 million."

At the end of the first season under Heidel, Schalke finished 10th and missed out on European football for the first time since 2000. On the final day of the season away at Ingolstadt, Schalke's ultras unfurled a scathing banner reading: "We thank the team for following us in such great numbers this season."

Heidel replaced Weinzierl with Domenico Tedesco, the young German-Italian tactician who had just rescued second-division side Erzgebirge Aue from relegation.

Under Tedesco, Schalke stormed to a 2nd-place finish in a season which also featured an unforgettable derby away at Borussia Dortmund when Schalke came from 0-4 down to draw 4-4. When they then beat Dortmund at home, Tedesco was invited up onto the ultras' pedestal to lead the Nordkurve in celebration.

"Tedesco was an absolutely friendly and sympathetic person," says one club source. "He had a good relationship with the players, and the players followed him." This reporter fondly recalls post-match chats with Tedesco, where he would listen closely to questions and respond articulately and in detail.

Yet, despite the second-place finish, there was criticism of Tedesco's conservative football. Even Tedesco admitted to a club source at the time: "On a scale of Guardiola to Mourinho, you know I'm more Mourinho, don't you?" 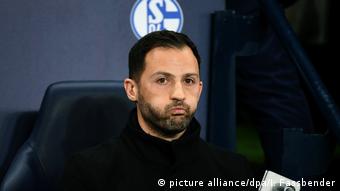 Too much, too soon: Bundesliga runner-up Tedesco

But Tedesco was also a workaholic and a perfectionist, and he tried to adapt his style the following season — unsuccessfully. Schalke lost their opening five games and rifts appeared in the dressing room, rifts which the young coach was left to deal with alone.

"The hope was that Tedesco would be our Klopp for the next few years," says Uwe Kemmer. "But he was a young coach who wanted too much. He was close to burnout by the end, you could see it in his eyes."

Kemmer recalls a trip back from Manchester in March 2019, where Schalke had been thrashed 7-0 by City. "I was sat behind him on the plane and he immediately took his laptop out to start preparing for the next game. He was never able to relax."

Kemmer believes Tedesco needed more support from a management figure, who could have also helped Heidel with transfers and squad planning. "But when we suggested that to Heidel, he was insulted. That's why he ended up stepping down. He couldn't make the jump from Mainz to Schalke."

Heidel had already resigned before the City defeat, and Tedesco was relieved of his duties shortly after. Schalke finished 14th. The paradigm shift had achieved little, but worse was to come.